A few years back, there was a small but significant shift in the way children dressed up for World Book Day. Some went to school as Harry Potter characters, whereas previously pretty much all of them did. It marked a slight waning of the ubiquity of J. K. Rowling’s franchise. Now it’s been eight years since the last of the film adaptations came out, and in the meantime Rowling herself hasn’t done the franchise any great favours with the lacklustre Fantastic Beasts prequels and the meh-y Cursed Child stage follow-up. So, who’s still keeping the magic alive, and how are they doing it?

DraigCon is a fiercely independent Potter fan convention – Warner Bros are famously jumpy about their rights being in any way infringed – which has returned to The Printworks in Manchester for a second weekender. Several different fantasy fan events have been staged here before, but in execution The Printworks interior conjures up that Diagon Alley vibe perfectly.

It’s extremeley busy on the day, too, positively bustling with visitors and merchandise traders. You could treat yourself to anything from a home-whittled wand or a Lego Hogwarts set to a Dumbledore Funko Pop. There’s plenty of fan art prints for sale, too, as well as bespoke coasters and t-shirts.

Bearing wristbands or not, the public seem to have full access to The Printworks, so anyone can wander through. This makes for some striking sights, such as a huddle of off-duty Death Eaters having a crafty fag by the entrance or a gang of non-participating lads in the bowels of the Bierkeller pointing at a Dobby statue and bellowing “eh, look, it’s Dave!”. 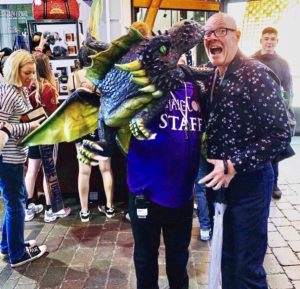 There’s a friendly Hagrid-a-like roaming around and someone’s operating a fantastic puppet beast. Evidently the whole thing is run with genuine affection for the Potterverse, and up to a point that’s infectious. Many paying punters have dressed for the occasion, catered for here with sessions on cosplay hints and tips. It’s notable that the crowd skews female and perhaps older than you’d expect. There are many Hermiones hereabouts, then, and even more Bellatrixes (might this be conclusive proof that people prefer bad girls to swots?). 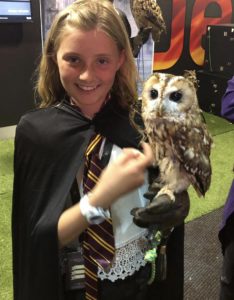 There are guests, too, though largely the focus is on actors involved in making the films (with Fantastic Beasts mostly sidelined) rather than the books. JK herself isn’t likely to rock up, after all. The guests participate in themed panel Q&As in one of the Vue cinema spaces – for instance, one gathers together four former Gringotts goblin actors, another three wizardry school staff – when they’re not facing long, slithering queues awaiting autographs and selfies. There’s a well-defined pecking order here, with second-tier Hogwarts students able to command bigger fees for their signature than bit-part Hogwarts staff, and lesser-known Weasleys outstripping the lot. Oh, to be  party to the negotiations between convention organisers and actors’ agents: “Yes, I know most of his role ended up on the cutting room floor but he was also in the video game, he does a lot of very well-respected theatre work and he’s always been terribly popular with the fans.”

It has to be said, though, that a good few punters at DraigCon seem disgruntled. The truth is, there’s not a great deal to do, at least not without shelling out even more money. Buying a wristband entitles you to come in and buy more stuff – autographs, photo opportunities, merchandise – and as there’s nothing to stop people wandering in without a wristband, they have all those opportunities anyway. Some visitors are heard muttering the word ‘con’, and not in a good way. 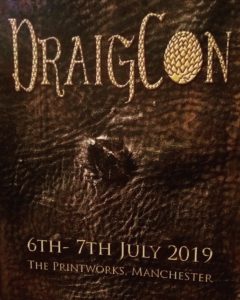 Inescapably, the extra expenses beyond the ticket price could make this a very dear do indeed, unless you’ve got spells and chains on your wallet. To a degree it’s an exercise in flogging the magic to those reliving or extending their youth.

There is a certain non-corporate charm to DraigCon, though, so hopefully these are teething problems which can be addressed. The organisation is perhaps a little ramshackle around the edges here and there, but for the most part it seems to be running smoothly. For all the disgruntlement, its heart seems to be in the right place. In fact, you might say the Potter flame is being guarded more carefully here than it is in official hands. Ultimately, though, it would be a shame if DraigCon’s legacy was to rest on this somewhat disappointing outing. Is there a spell for that?