The Mystical and Extraordinary Festival No.6

Karen Connolly September 12, 2014 Arts, Bands & Gigs, Music Comments Off on The Mystical and Extraordinary Festival No.6

Karen Connolly – and likely the rest of Manchester –  spent the weekend at a sun-soaked Festival No.6 where the magical village of Portmeirion played host to an eclectic mix of entertainers.

It was all a bit like wandering through a surreal dream for three days.

The Italianate village of Portmeirion welcomed back Festival No.6 for its third year with a line-up including Beck, Pet Shop Boys, John Shuttleworth, Mike Garry, Don Letts and, whew, a slew of others.

But as mystical and extraordinary as this festival is, by Saturday the sight of Bez riding a winged bicycle down its cobbled streets or watching a throng of revellers of various ages dancing on a floating platform in the woods to a remix of Dolly Parton’s Nine to Five all seemed, well, rather normal actually.

Portmeirion is a unique, intoxicating and magical place and very soon you become completely enveloped in its mystique resulting in total acceptance of its eccentricity. 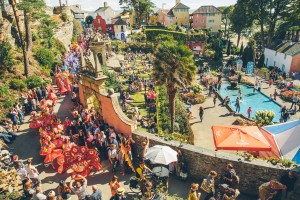 It’s a stylish and sophisticated event too with everything from intimate performances in the village’s Town Hall to surreal street parades and the big bands on the main stage.

It’s well worth the travelling time from Manchester – it took us about two and a half hours with a coffee stop en-route – and despite it only being the festival’s third year, organisation is pitch perfect with regular buses from the park and ride area.

Food is above usual festival standard too and this year, Manchester House’s Aiden Byrne cooking al fresco and later taking part in a Q&A with Jay Rayner.

Sir Clough William-Ellis’s pastel-painted toy town village was once home to Patrick McGoohan’s Prisoner and the place even bewitched Beck who announced wistfully that he intended to “buy one of those little houses, right there in the village” as he pointed to the clutch of tiny cottages illuminated in the night sky.

Fresh from playing the London Roundhouse, the Canadian singer-songwriter was on top form with hits like New Pollution and Loser being particularly enthusiastically received on the Saturday night.

Earlier in the day I’d wandered over to the Town Hall to listen to Wigan Young Souls DJs and later headed to the Central Piazza for a Charleston dance class courtesy of the Mudflappers.

John Shuttleworth was holding court later that evening with his backlog of classics including I Can’t Go Back To Savoury Now, Two Margarines, You’re Like Manchester and, that well-known crowd pleaser, Y Reg. 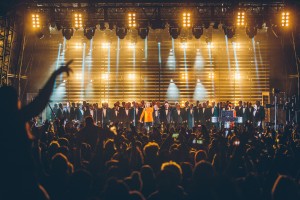 But Saturday, or dare I say, the whole three days, surely belonged to 40 Welsh blokes dressed in their best, freshly-pressed white shirts, dinner jackets and bow ties. Yes, of course, I’m talking about the Brynthoniad male voice choir who delivered a set on Saturday night in the Piazza that had grown men crying as a mackerel-sky dusk settled over the square.

The stout ranks of the choir delivered a repertoire that included O Sole Mio, Land of My Fathers (accompanied by their countrymen in the huge crowd) and Go West. The latter accompanied, either by pure chance or careful planning, by a stunning illuminated parade. Definitely one of those ‘you had to be there’ moments.

On Sunday night, the men helped the Pet Shop Boys close the festival by joining them on stage for a final rendition of that song. And this time accompanied by every living being in Portmeirion.