Film Review: Have a Nice Day 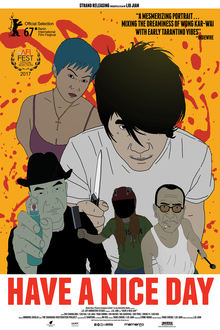 Have a Nice Day is something of an oddity.

It’s a full-length Chinese animation crime film that has both art house and mainstream releases as well as European and American distribution. Not something you see everyday. It was infamously pulled from the Annecy International Animated Film Festival last year, after screening at the Berlin International Film Festival in competition for the Golden Bear where it was well received. This created enough buzz to secure an international theatrical release where it has pulled in nearly half a million US dollars at the box office – not bad for a small, independent animator. 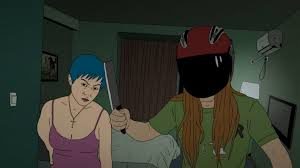 It is an intriguingly grimy story of a bag of money as it passes from one unsavoury underworld character to another through the cracks in mainland Chinese society where everyone is following their dream for the big bucks. It begins with Xiao Zhang stealing one million Renminbi from his boss. In a plot reminiscent of Dog Day Afternoon, he needs the cash to take his girlfriend to South Korea for reconstructive plastic surgery after a botched job. He is pursued by a motley crew of hired assassins, wannabe thugs and opportunistic deadbeats with light-fingers and big ambitions. It’s a darkly comic pursuit through hotel rooms, internet cafés and pit-stops as the bag changes hands in a series of violent mishaps on an increasingly stormy night. The bag ends up back by Zhang’s side as he lies bloodied in a pool of rainwater.

Formally it is it flat and muted in tone to give the story a neo-noir flavour where everything moves at a distinct and detailed pace. The curl of smoke from a cigarette and the drops of blood are given equal weight to the scarred faces of the protagonists looking for the big payoff. It is a cartoon underworld for grown-ups and thoroughly enjoyable.

Some years ago, Liu Jian and his wife came to Manchester to screen their first production, Piercing 1, another dark tale of the social struggles of the have-nots in communist China. They were a lovely and engaging couple. As we parted company on an atmospheric night in the noirish Castlefield Basin, I wished them well for their future endeavours.

It would appear they have come up trumps as Have a Nice Day is, oddity or not, a triumph.