Until now, British writer/director Peter Strickland has brought us films such as Berberian Sound Studio and The Duke of Burgundy which, while exquisitely and dazzling labours of love, were perhaps just a little too arch and knowing. In Fabric takes another leap, though. It’s still distinctly Stricklandish, but it’s altogether warmer, funnier and less dry.

This emphasis on warmth might come as a surprise given the subject of the film, which is that a certain enchanted red dress poses a deadly threat to whoever happens to own it. Step forward newly single bank teller Sheila (Marianne Jean-Baptiste) who’s looking for something nice to wear when she re-enters the dating game. In Fabric has been called a horror comedy, but that’s a tricky sub-genre with a thousand duds littering it up. This has some genuinely alarming moments, as well as big laughs. Often, they come at exactly the same time.

It’s a wonderfully original concoction, but it is possible to discern some films which might have been an influence, or else have some kinship with it, including Jan Svankmajer’s Conspirators of Pleasure, Anna Biler’s The Love Witch, classic Dario Argento movies such as Suspiria (though In Fabric knocks last year’s lumpen remake into a cocked hat) and even Halloween III (Strickland made a radio version of writer Nigel Kneale‘s The Stone Tape too.) Fans of Ben Wheatley, who acts as executive producer here, might appreciate the gallows humour. It’s also kind of like a 70s portmanteau British horror film, but at the same time it very much isn’t. All told, it’s absolutely its own beast. 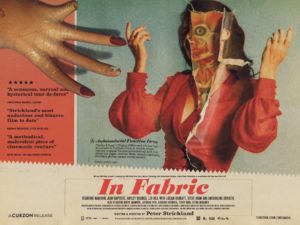 A major strength is the cast. In Fabric has such an idiosyncratic, non-naturalistic tone that it can’t have been easy to find performers who could nail it, but Strickland has evidently taken great care to find them. Musician Barry Adamson has scarcely ever acted before, but he’s perfect as Sheila’s suitor, Zach. As Sheila, Marianne Jean-Baptiste is something like the backbone of the film, though she’s worked mostly in TV since she came to prominence in Mike Leigh’s Secrets & Lies. Fatma Mohamed, a Strickland regular, pretty much sets the whole tone and steals the show with an extraordinary turn as department store doyenne Miss Luckmore. Elsewhere in the cast, Leo Bill, Hayley Squires, Steve Oram and Julian Barratt all make their mark, and in particular Gwendoline Christie, in the relatively small role of Gwen, hits the spot dead-on.

As the dreaded dress goes about its business, the look of the film is something remarkable. There’s a rich, evocative design aesthetic at work. In a way it’s fetishistic, but that’s not thrown away. In fact, it could be seen as being about fetishism. It’s also curiously erotic for a film in which you don’t glimpse so much as a nipple. The look and feel of the clothes, catalogues, advertisements and old school department stores positively drips off the screen. Lots of baffling symbolism is bandied about, but in a playful sort of way. Visually it’s a feast, but sound design is crucial too, not least a bewitching, woozy, rhythmic score courtesy of Cavern of Anti-Matter, aka Stereolab’s Tim Gane. 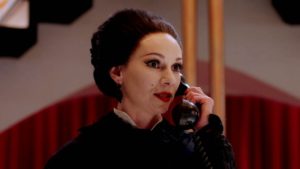 At a preview of the film at Manchester’s HOME on June 3, Strickland was present for a post-screening Q&A with HOME’s Jason Wood. In a supremely self-effacing way, Strickland explained some of the genesis of the piece, right back to memories of visiting legendary Reading department store Jackson’s as a nipper. The script, it seems, was just one of several he had lying around until Julian Barratt took a shine to it. Strickland revealed the film is set during 1993, which isn’t otherwise clear through the general 70s/80s retro timelessness. He was unconvinced by suggestions that he’s made a veiled satire on consumerism and instead sees the film as a hymn to the haunting quality of clothes. He also detailed some of the less immediately obvious influences on the piece, from the #MeToo movement and ASMR videos to BA Robertson promo clips.

There’s a lot going on within In Fabric, but it manages to wear it lightly and it works as sheer, albeit weird, entertainment. Assembled with dream logic and soaked in atmosphere, perhaps it isn’t for everyone, but it’s to be hoped that it gets seen, and indeed re-watched, as widely as possible. As a filmmaker, Strickland is the real deal. If you long for British cinema to be intelligent, imaginative, original and witty, your prayers have been answered here.