It’s taken around ten years for Julian Barratt and Simon Farnaby to bring the germ of an idea about a washed-up actor from a TV detective show to full fruition on the big screen. Directed by theatre alumnus Sean Foley and filmed on location on the Isle of Man, Mindhorn opened in cinemas this week and it’s a hoot, the bionic Bergerac comedy with echoes of The Wicker Man that the world has been waiting for.

The pair both hail from the North. Barratt, originally from Leeds, is best known for his partnership with Noel Fielding as The Mighty Boosh, and in recent years, roles in the twisted Channel 4 sitcom Flowers and the British feature films A Field in England (2013) and Aaaaaaaah! (2015). Farnaby, who comes from Darlington, will be familiar to viewers of everything from Horrible Histories and Yonderland to Detectorists and, indeed, The Mighty Boosh itself.

As part of Mindhorn‘s impressive cast, Barratt plays Richard Thorncroft, the actor whose long-ago heyday involved starring as the eponymous detective, while Farnaby appears as Clive, Thorncroft’s erstwhile stunman. They’re drawn back into each other’s orbit when nefarious goings-on require the police to call, with great reluctance, on Thorncroft’s professional services.

Speaking exclusively to Northern Soul, Barratt and Farnaby explain the genesis of Mindhorn, taking in as many curious tangents as you would imagine.

Mindhorn is the first time the two of you have written together. How was that?
Simon Farnaby: Hmmm. It was OK.
Julian Barratt: Yeah, it was alright. I mean, we’ll never work with each other again.
SF: We’re done now. We’re done.
JB:  We’re done, yeah. Unless the film does really well, and then we’ve always wanted to work together again.
SF: Then we’ll bury the old problems and get back together and go for it again, but otherwise we’re done. No, it was it was good. We enjoyed it, I think.

If you’ve been used to writing with other people, does that new rhythm take some getting used to?
SF: We’re quite similar. Usually there’s one who’s really diligent and sits at the computer while the other one just spouts nonsense. I’m maybe a bit more that guy.
JB: I think I’m slightly more neurotic than you, possibly.
SF: Yeah.
JB: I can get quite disheartened or what-have-you with it. I sort of want to throw my laptop out the window. Simon’s more on an even keel, I think.
SF: I try and keep Julian positive.
JB: I’m a real handful to deal with, you know. Tantrums, weeping…
SF: You don’t like to finish things because you always think you could do better. And I go, ‘we’ve got finish at some point’.
JB: ‘Let’s get through this draft and move on’ – which is great. That’s the way to do it, really. 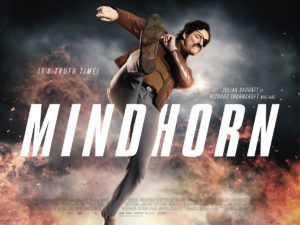 Was it a case of you sitting down with the specific intention of writing a film? Or did you just come up with this idea and decide that a film would be the best way to tell it?
SF: No, it was definitely a film. We’re both big film fans and we thought it would be great to do a film that was really funny. That was the goal.
JB: Well, we did think of it at one point as a TV project. We took it to a producer and they said it should be a TV show, so for a minute or so we started thinking about it like that. But the idea that we had is really a one-shot sort of story. It’s got a beginning, a middle and an end, so you could break it up into pieces and do it like that, but it’s not a resetting situation as far as we could see, so we then rejected that.

How do you feel about the film now that it’s finished?
SF: Oh, it’s deeply flawed.
JB:  People do seem to like it. That’s really gratifying because there’s always that battle between jokes and story, so we put a lot of work into trying to keep it funny as it goes along. I feel like we’ve done some justice to what was a very good idea inititally, which was Simon saying, ‘a man phones the police and asks for Detective Mindhorn, who’s fictional’.

That name ‘Mindhorn’ has been around for a while. It even popped up in The Mighty Boosh.
JB: A friend of mine, Oly Ralfe, wrote a thing for the Boosh called Bruno Mindhorn. It was like a sort of Belgium surrealist poem. Then Oly wrote an album and called one of the sort of songs Bruno Mindhorn. Simon saw the album and saw the name.
SF: I was trying to think of ideas when I heard that song and it sounded like a name for a detective. We had already talked about doing something about a detective, so it was a nice sort of connection.
JB: Yeah, so that’s how that name came about. Interestingly I was talking to [cult singer-songwriter] Robyn Hitchcock about the idea when we were writing it and he went, ‘oh, that sounds great, I’m going to write a song about it’. It’s on his new album, a song called Detective Mindhorn. Weirdly, in fact, Oly’s a big fan of Robyn Hitchcock as well, so it’s a strange sort of ripple of musical influence.

Perhaps surprisingly, you’ve chosen to write a film vehicle for yourselves about a character who is very out of condition and decidedly past it.
JB: Well, obviously I am physically incredibly fit, so it was very, very difficult for me to get to that place.
SF: Yeah, really hard.
JB: I was initially way too fit to look like that. Simon was supposed to be my stuntman so I had to really bulk up just so Simon didn’t look bad.
SF: Yeah, just to make me look good.
JB: Well, I wouldn’t say ‘good’, but reasonable. Presentable, maybe.
SF: It was lovely of you to do that.
JB: I’m that kind of actor.
SF: You can always go back to your peak if you want.
JB: I can, it’s always there. It’s just within reach any time I want to go there.
SF: But now you’re enjoying the new casting opportunities of being a paunchy sort of middle-aged guy.
JB: I’m getting different opportunities. Yeah, I’m getting much more, like, ‘friendly farmer’ type roles. 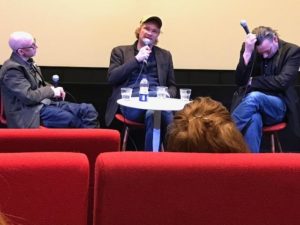 The film has a very strong cast and some of the names in there – Andrea Riseborough, Essie Davis, David Schofield – are not necessarily obvious comedy names. Was that intentional?
JB:  You need people who get the joke but don’t necessarily try and do the funny stuff – so, reactive to the stupid characters, perhaps. People who could play it straight within a comedy, which is quite a gift. It’s still comedy, but it’s playing the other side of it somehow, which is quite brilliant.
SF: It’s really about a poncy actor who’s thrown into a sort of a police procedural, so they had to play it as you would a crime drama, and they did that very well. But I mean, you’ve got Kenneth Branagh in it and he’s done comedy before.
JB:  Oh yeah, he sort of does everything doesn’t he, Kenny B?
SF: Much Ado. Stuff like that.

The Isle of Man is well known for offering very appealing financial incentives to filmmakers. Was making the film there just a matter of expediency or was there more to it than that?
SF: No, it was very lucky that they had a film fund, but it’s actually the perfect place. I’m surprised we hadn’t thought of it before. We kept thinking of Guernsey.
JB:  But no-one thinks about the Isle of Man. You just don’t think of it existing at all. It wasn’t on our radar or anything.
SF: I thought it had disappeared in the mid 70s, like a Bermuda Triangle thing. People go, ‘oh, is that still there?’.

Is that what makes it such a perfect setting?
JB: Yeah, it’s got a strange sort of Wicker Man vibe with weird signs everywhere, the three-legged symbol of the Isle of Man. It’s got odd weather and a strange landscape.
SF: It’s got this electric railway sign that looks like the Hollywood sign except it’s really naff. It doesn’t say ‘Hollywood’, it says ‘Electric Railway’. It was perfect, really.
JB: Bergerac was set on Jersey so we wanted it to echo that and be on an island. We wanted it to be a guy trapped on the island, like The Wicker Man. It’s similar in the sense of, a man goes to an island and has a really bad time. Richard Thorncroft would probably have liked to have remade The Wicker Man but just really kicked those pagans’ asses. He wouldn’t have let them get away with it. He would have sorted them out.
SF: That could be our second film. 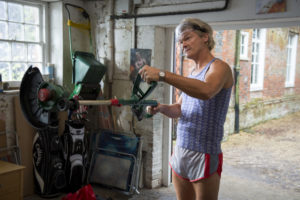 The film nods heavily to those 80s TV shows like Bergerac. Does that come out of a genuine love for them?
SF: Oh yeah, very much so.
JB:  It’s that thing of growing up on them and loving them and just totally not seeing the slightest thing wrong with them, thinking they’re just the greatest thing. I mean, Sunday night, Starsky & Hutch or Bergerac or The Six Million Dollar Man, there’s just nothing better than that when you’re a kid.
SF: I remember thinking that Bergerac was just the best most perfect television there could possibly be.
JB: Had you seen anything else?
SF: I was that age where I was just discovering narrative, I suppose.
JB: The Rockford Files I liked.
SF: The Rockford Files, yeah. Bergerac – well, I just wanted to be him. He’s handsome, women like him, there’s yachts and lots of people doing business.
JB:  Everything you wanted to do. Golf, yachting….
SF: Tennis…
JB: You are Bergerac.
SF: And then of course, you look back at it and you can see the creaks in it.
JB: We wanted to parody the genre from this vantage point, to show up the naivety of those sort of shows. And Richard’s sort of sense of reality is very much like that, sort of a bit creaky and badly put together, like a bad set with bad camera angles. He’s like that about life.

Simon, by way of sharp contrast you’ve just co-written Paddington 2.
SF: Yeah, that’s been filming. It is slightly different doing a family film, although they are both comedies. It’s all comedy and story, really.
JB [mutters]: Bloody Noddy Bear film that he’s doing…

Julian, when Noel Fielding was announced as a new prestenter on Bake Off, you were quoted as saying that you knew for a fact that he couldn’t bake. So, can you?
JB: Well, obviously they came to me first…
SF: You’re a bit fonder of cakes, aren’t you?
JB: Well, I had to put weight on for this part so I just decided to look into this cake business and what it could do. I have written a song for the film [Can’t Handcuff the Wind, in character as Richard Thorncroft], so I’m releasing that as a single. But not baking, no.

In some quarters your name has been bandied about as a potential new Doctor Who.
JB: I think I would be a good Doctor. Yeah, I’d be up for that. Who is at the moment?
SF: Peter Capaldi, but he’s quit.
JB: He’s quit? Who’s coming up, then? Hello! Start the Twitter campaign right now.

Thought for the Day: "I've always got my energy from being alone in order to go out in the world and be social." - Tuppence Middleton