The King is dead. Long Live The King! Aiden Byrne is back. Following financial problems at his former employer, Living Ventures, the restaurant he created (Manchester House) is open again with a new name and a new menu.

Reborn in the same premises and with the same décor, Byrne has done away with the chef’s table, which was on the pass and prevented the room seeing the chefs at work. I gather a root-and-branch interior redesign is on the cards for 2019. We wait with baited breath to see what this Merseyside-born chef will do with the place. 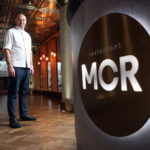 Anyway, to the main event. We came to the tasting menu hot from watching the finals week of MasterChef: The Professionals, where the cooks make beautiful dishes that are works of art and often bear no resemblance to the original ingredients. And so it is here. A dish announced as ‘Ribblesdale goats’ cheese and onion soup’ is actually a bowl containing what is clearly half of a duck’s eggshell with four little white cubes in the bottom. A quizzical glance at the waiter provokes his enigmatic smile – he must get this reaction all the time – and, as we look down, the shell has started to crinkle around the top before beginning to melt. It’s a fine construction of frozen white onion soup. I found out later how it’s done and, like all magic, I’ll not spoil it by revealing the trick. You’ll have to ask for yourself. 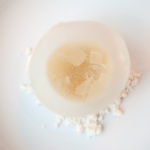 A dish of mussels, peppered pork lardo, pickled cob nuts and squid ink tapioca looks like a miniature seaside landscape; even the sourdough resembles the dome of an Italian church. But how does it all taste? Scrumptious. Any menu of 12 dishes has high points and low points but there was nothing here that wasn’t fascinating and tasty – and most of it excelled.

The first of our dishes sported a little hat of crispy chicken skin, then it was onto white crab and sorrel, accompanied by a glass of gold rush apple juice. The crab was as crabby as a crabby thing, the apple juice was long and rich and, with 7 per cent alcohol, reminded me of a good Sauternes, although dryer in the end. Like everything else served by Restaurant MCR, the apple juice was made on the premises. They should sell it by the bottle. 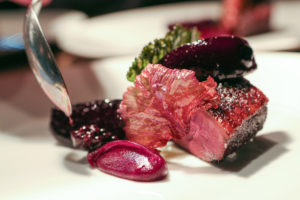 The Jerusalem artichokes in an umami mushroom broth had been confited in butter to a degree of unctuousness bordering on the obscene. The grilled Sicilian prawns with pickled carrot and nasturtium were so perfectly cooked that my notes say they were “the prawniest prawns I have ever eaten”. They’re cured in sugar in salt before being blow-torched and go brilliantly with a carrot puree. The braised beef cheek with a salty secreto ham dissolved in the mouth. I could go on. The puddings, all three of them, were a triumph of the pastry section. 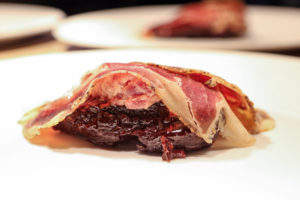 We drank a 2016 Brouilly Chateau Pierreux recommended by the sommelier, Isabelle, who was clearly separated at birth from Jodie Comer, and whose taste in wine was as faultless as Villanelle’s* weapon of choice. She also recommended a white rioja A&A Martinez Laorden 2016 to go with some of the lighter dishes which was nicely rounded, and an amazingly rich Valdespino 1842 solera sherry to finish.

The service was charming and efficient throughout, without being over-zealous or intimidating, and we left three hours later feeling thoroughly pleased with ourselves. Long Live The King! And maybe now Michelin will give Byrne that crown. He certainly deserves it.

*Villanelle in Killing Eve, BBC1, played by Jodie Comer who, for reasons that would be wrong even if we knew what they were, was not nominated for a Golden Globe. Her oppo Sandra Oh got one, though, for her part in this morally meretricious but fabulously entertaining series.