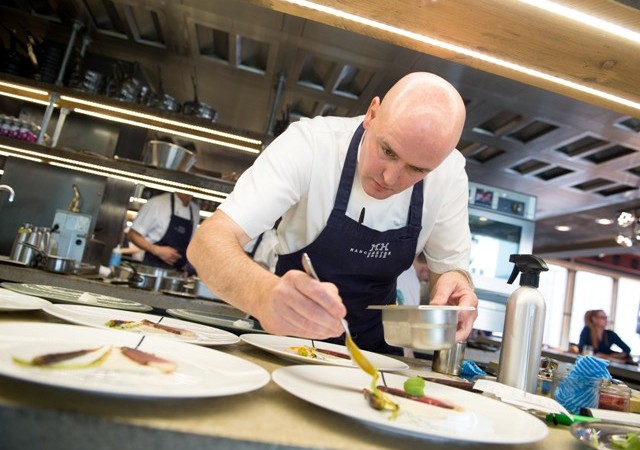 Manchester House is like the best boyfriend I ever had. The boyfriend who snogged like a dream, made me weak at the knees and ruined me for other men.

Manchester House is the kind of top-flight restaurant where it’s OK to wear Wonder Woman trainers and an Emily  Brontë tee. I know, because that’s what I had on when I was last there.

And Manchester House is the type of place where the food is mouth-wateringly first class, so much so you fear subsequent dining experiences will feel like sitting in steerage.

Nearly two years after opening its doors to a Manchester populace clamouring for fine dining, this Living Ventures multi-million pound eaterie is continuing to live up to expectations. It has won numerous awards, is booked solid at evenings and weekends and has garnered a slew of rave reviews, not least from Northern Soul who, back in 2013, described the menu capable of “tickling the pickiest of palates”, the presentation as “food as theatre” and, in conclusion, borrowed a phrase from John Simm: Holy Shitbox. 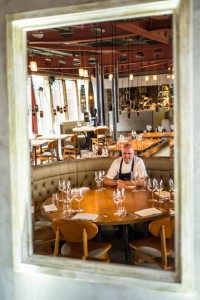 Today head chef Aiden Byrne is working as hard as ever. The menu is changed once or twice a week (which must take considerable experimentation and perfecting) and he is doing much to promote the lunch offering and a chef’s table. I suspect he’s still chasing the ever-elusive Michelin star (he was the youngest chef to win one and Manchester hasn’t had a star since 1974) which is just as it should be for a man who was head chef at London’s Dorchester Hotel and Tom Aiken‘s head chef at his Chelsea restaurant.

When I interviewed Byrne shortly after the launch of Manchester House he told me that “one of the reasons that fine dining hasn’t worked [here] in the past is that fine dining restaurants can be quite intimidating places”. Although Manchester House has (in the evening at least) price tags to match the snazziest of snazzy places, it could never be accused of making its guests feel uncomfortable – quite the opposite. Whether you’re at the uber swish polished concrete chef’s table (so close you can feel the heat from the grill; note to self, do not wear a nylon shirt for this experience) or sitting elsewhere, the atmosphere is relaxed and welcoming. Much of this is due to the staff: knowledgeable and helpful without being overbearing, they pitch their service perfectly.

And what of the food in 2015? At present, Manchester House is all about its lunch menu. At £22.50 for two courses and £27.50 for three, this is comparable with gastropubs across the North West and, for the most part, immeasurably better. Then there’s the six course tasting menu at £60, with a wine flight to match for a further £35. OK, so we’re not talking change from a tenner here but you really, really get what you pay for – and then some.

On the two occasions I visited recently, I plumped for the six courses (when in Spinningfields…). The grilled carrot and fennel with Skyr yoghurt and wild boar ham appeared on both selections, as did the sourdough bread with roasted cep mushroom butter, but they were the only duplications. How do they reinvent so quickly, and to such high standards? It takes all my creative culinary imagination to add Lancashire Sauce to baked beans. 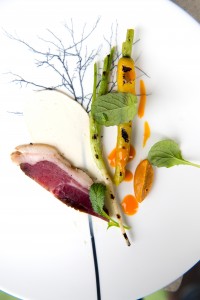 Both of these dishes were served at the beginning of the meal and both were feckin’ brilliant both times. Incidentally, the wild boar comes from a farm owned by one of the Living Ventures head honchos. I don’t know what the hell they did to it but it was quite possibly the best thing to pass my lips since, oh, the last thing I ate at Manchester House (I later found out the ham had been infused with fennel and pepper and, regarding the carrot dish, that was accompanied by caramelised carrot purée and carrot vinegar – Sarson’s, eat your heart out).

Helpfully split into three sections called ‘Beginning’, ‘Middle’ and ‘End’, the six-courser was an embarrassment of riches. On one occasion the Beginning included River Trent wild salmon, cucumber, caviar and lemon verbena (no, I don’t know what verbena is either), on another it was crab risotto. The risotto was all brown crab meat, powdered dried oyster leaves and puffed rice for texture while the salmon was, according to my companion on said day, Northern Soul‘s Chef Tony, “one of the best fish dishes I’ve ever had”. The cucumber, it emerged, was dragon cucumber. Now, why don’t they sell that in Tesco? I would buy it in a flash for the name alone.

By now we were in the ‘Middle’. From red mullet with shellfish consommé, and poached plaice and smoked eel, not to mention Texel lamb breast and cutlet, they were really spoiling us now. Later at my desk, when I was writing this review, my notes petered out. Had I been overwhelmed and lost the ability to hold a pen? Or been so enamoured with my plate that I’d turned over about 50 blank pages and continued scribbling? The latter turned out to be true and I’m able to report that the squab pigeon with Scottish girolles and English broad beans was quite possibly the most alarming thing I’ve ever seen and then been expected to eat. 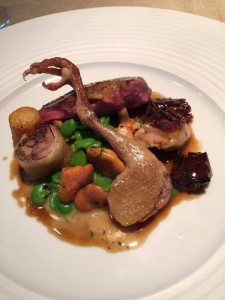 Like a velociraptor in gravy, this FREAKED ME THE FUCK OUT. And that’s before I got to the heart nestling alongside. Have a look at the picture on the left and decide for yourself. It looked like a bird in its death throes and surely something that even the most committed of carnivores would have baulked at.

I was reminded of the last time I ate pigeon at Manchester House. According to my review at the time, when presented with roasted pigeon with black cherries and pistachio, I’d “brushed aside thoughts of the pigeon with the gammy leg I’d spotted on the way to lunch, and marvelled at the freeze-dried sour cherry dusting and silently congratulated Byrne on his cunning: he’d disguised one of the whole cherries as foie gras”. This most recent pigeon incarnation was just as clever, but an innovation too far for me.

Anyway, onto desserts. Truth be told, I was underwhelmed by the mango and lime parfait, and by the chocolate, cherry and chai. But, BUT, on my second visit, the reduced milk, blackcurrants, apple and dill, and then the strawberries and cream with lavender and tarragon were extraordinary. They had dill pollen (dill pollen!) in the mix and used tarragon in a pudding. For chrissakes, who thinks of stuff like that? This was the moment I ran out of superlatives. I left it to Chef Tony to sum it up: “I’m sad. It’s all gone.”

I spose my only quibble about the Manchester House experience, and it’s a minor one, is why don’t restaurants like this use decanters, or at the very least aerators, when serving red wine? OK, I’m by no means a wine aficionado but it has always been my experience that the red stuff tastes tons better like this and it’s dead simple to do. This isn’t to take anything away from the wine flight (which was superb) but come on, isn’t it something worth thinking about?

Anyway, let’s put teeny tiny grievances aside. I’ve got fingers, toes and eyes crossed that Manchester House gets a Michelin star next month. It proper deserves one. 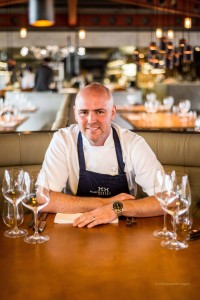