It is Wednesday July 18, midday on a very hot day, seven hours away from the semi-final against Croatia and I’m at the press opening of the keenly awaited Tast Catala on Manchester’s King Street.

The first thing I see is a flag of St George sewn onto the breast pocket of a fellow journo. I suspect he is supporting England but it is askew and looks like a target. As much as I’m looking forward to the next few hours, I’m dreading the match. As a Scotland fan I cannot bear the idea of pizza promoting Southgate and his boys ‘coming home’ with the World Cup – the effect on the Brexit debate would be disastrous. I put the thought behind me and focus on the clean, modern lines of the interior of Tast; it is as beautiful as the glass of Cava that greets me on arrival.

It’s an interesting fact that England and Catalonia share the same dragon-slaying Roman soldier of Greek origin as their patron saint. Whereas I normally associate St George with drunk fat men in ill-fitting suits with red roses on their lapels and skinheads shouting about releasing a cartoon fascist, in Catalonia the lovers exchange flowers and books on the day of St Jordi – beauty and knowledge. 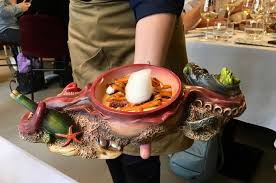 It is these qualities that Michelin-starred chef, Paco Pérez brings with him to Manchester. His food is deeply-rooted in his knowledge of the cooking traditions of the region and is as different to Spanish cuisine as the language itself. I greet the staff with a hearty “bon dia” rather that the Castilian “hola”.

Two staples of any Catalan menu are served with a Paco twist- the pan con tomate comes on sourdough bread rather than pan rustic and Espinacs a la Catalana, a simple dish of spinach, pine nuts and raisins, is garnished with a scoop of pine nut ice cream. Both are delicious. Pérez also has a wit as I am presented with a miniature Dunkin’ Donut of white chocolate, raspberry and, ta da, foie gras. Tasty and funny.

In an opening address, a shy Pérez said that he wanted a pared-down interior so that customers could concentrate on the beauty of the food in front of them – what he called “tastets”, small surprises more complex than tapas, plates of the unexpected that allows for a “deeper appreciation of several flavours within a single meal”. In a long lunch which consisted of 14 courses, it was difficult to pick one or two favourites that stood out in a conveyor belt of great and distinct dishes, but Patates D’Olot and Calamarsets Farcits really did blow my taste buds away. 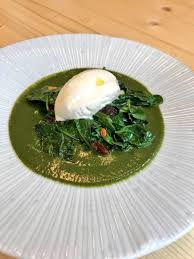 The first were small deep-fried pockets of potato and beef cheeks sauced with carrot mayo. Moist, succulent and crisp. The second dish was baby squid stuffed with egg and tomato in a rich brown savouriness that melted on the palate and lingered long in the taste. A white Can Sumoi and a red Pardas, both Catalan wines, flowed in timely manner as a lively table conversation proceeded through the ‘ohs’ and ‘ahs’ of pure culinary pleasure. My apologies to Eric but it was a homage to Catalonia.

About four hours after entering, I left the beautifully appointed Tast Catala, full-up and a convert to Chef Paco and his team. It is a welcome and individual addition to Manchester. I sincerely hope they succeed as it’s been some time since I had a meal like that. Later on, Croatia came to my rescue and beat England 2-1. The perfect end to a perfect day. As the Catalans say, “molt be”. 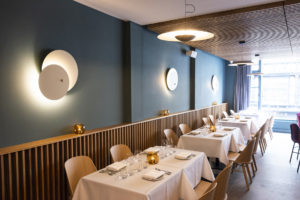