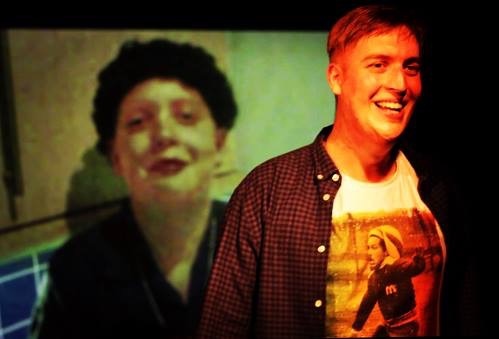 At only 50 minutes long with no interval, this play is a real emotional roller-coaster. We follow the mental descent of Billy Costello – a young, gay, depressed, autistic actor with a drug problem – during what could prove to be his last few days on the planet…in Blackpool.

Oldham-based actor Mark Newsome portrays Billy with truth, integrity, clarity and a real passion. Although a one-man play, Newsome delivers duologues within the text as Billy encounters both random strangers and problematic family. He does this with aplomb, the audience quickly buying into the theatrical device and enjoying the well-scripted content.

Writer Phil Pearson has delivered a tight and fast-moving script, which Newsome delivers with apparent ease. Costello’s downward spiral towards attempted suicide is, as you would expect, emotionally charged but deliciously peppered with acidic one-liners and asides that allow the audience to laugh through the tears and create a real empathy with the main character and his demons within. 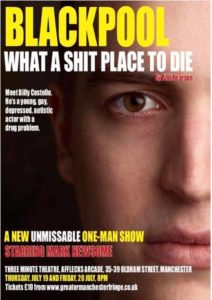 The main thrust of Costello’s mental anguish would appear to be both his and his family’s struggle with his sexuality. His other issues – drug-use and autism – are featured secondarily within the play by means of some clever writing which came across as half-rap, half incantation. It worked well.

A few minor directorial tweaks would solve some positioning issues and allow better use of the cleverly conceived projection sequences within the narrative, which should be expanded in any future production to augment the staging. That said, director Grace Cordell has done a very good job and presented an almost full house with both a production and a performer which should go much further in the future.