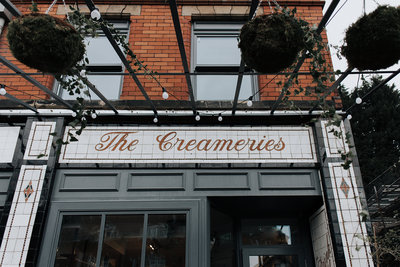 About this time last year, I took retirement. At first I had trouble filling my days until I hit upon the idea that I would fill them with eating. I love nothing more than sitting down to a good meal. It brings joy to my being and meaning to my existence.  And so it was with this sense of renewed purpose that I set off to The Creameries in Chorlton.

I was invited by Mary-Ellen McTague to sample the new tasting menu at her cool South Manchester eatery, The Creameries. McTague has had a memorable career cheffing in Manchester from the critically acclaimed Aumbry (dubbed ‘the food of the gods’ by Northern Soul‘s Editor) through a stint at the café in Manchester City Art Gallery and a pop-up place serving foraged food on Oxford Street, before opening The Creameries. She has won Chef of the Year in Cheshire Life and Lancashire Life as well as at the Manchester Food and Drink Festival Awards, and The Creameries scooped Newcomer of the Year in 2018 at said awards. So extensive was my excitement, I was 20 minutes early. 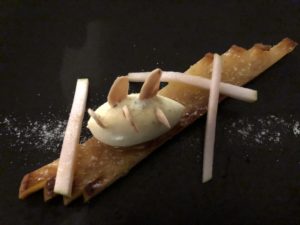 Thanks to my misguided time-keeping, I was the only diner for over an hour. I mention this because as a lone eater it is not often that I am afforded the sole attention of the entire wonderful staff, especially the restaurant manager and sommelier extraordinaire, Kimberly. It made the whole evening a special experience.

The Creameries has recently installed a wine pump which dispenses a short but well-appointed selection of natural wines by the litre and half litre. It even does takeaways with returnable bottles. After a much-needed G&T, I ordered a half litre of cold, dry and fruity Sauvignon Blanc before my culinary journey began. And so, to the food. 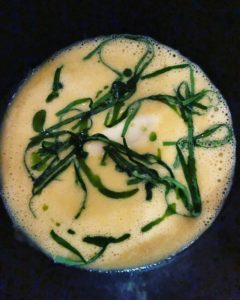 The dinner is advertised as a five-course tasting menu but if you add on the pre-dinner snacks that could easily stretch into seven or eight courses. The snacks are made up of a small bowl of potato straws sprinkled with lime pickle salt, split pea chips and mushroom ketchup, and a trio of superb pickles made from crystal lemon cucumber, smoked golden beetroot and rhubarb as well as a flavoursome sourdough bread and two types of butter, churned in-house. I was in heaven and hadn’t even reached the first course.

A Swede Bottarga with pickled Bramley apple, toasted almond and sour cream followed. A bottarga is normally made from compressed fish roe but here it was replaced with tender strips of swede. The combination of flavours, the sweetness of the swede, the sharpness of the apple and the smoothness of the sour cream worked together beautifully. A soup of roast marrow with a Killen cheese dumpling arrived steaming from the kitchen. What a bowl of mellow fruitfulness to warm the heart on what was a wet evening.

The main course was a pigeon pie with cavolo nero and roasting juices. It came with a schmear of liver parfait at the bottom of the pastry to add to the gaminess of the dish. As a treat, Kimberly brought a glass of poulsard, a light red with a powerful finish that complimented the pigeon to a tee. If all this wasn’t enough, I finished with a hazelnut and rosemary semi freddo and coca brittle – the perfect sweet to end to a perfect meal.

Lone dining is a wonderful way to ruminate on a remembrance of meals past. As I leave I tell Mary-Ellen and her excellent team that I will add this evening to my shortlist of the best meals I’ve ever had the great pleasure to eat. Unfortunately there is no award to go with this other than the undying gratitude of a very happy old-age pensioner. 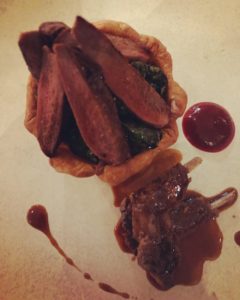