A brand new eatery opening in the neighbourhood always piques the interest. But there is an issue when the neighbour in question is Chorlton, which already has restaurants to spare: namely, can the new place stand out from what’s there already and offer something else? Happily, The Creameries is definitely something else.

Once a local dairy and more recently a semi-abandoned property with a strangely striking tiled doorway, the team behind The Creameries have transformed the space partly thanks to a successful crowd-funding campaign. It’s entirely appropriate, then, that the end result feels somehow home-made. It’s run, in a properly hands-on way, by chef Mary-Ellen McTague, baker Sophie Yeoman and designer Soo Wilkinson. Their produce – bread, butter, cheese, cakes – is visibly made on the premises. It’s available for take-out from the front counter, but further inside there’s an unfussy, light, airy seating space bedecked with plants and greenery. The menu changes constantly so blackboards with options are propped up by your table (presumably the ability to write quickly with chalk is ‘desirable but not essential’ for new staff).

We visited at lunch time and started out with a small but highly appetising dish of pickled cucumber and sauerkraut. There was also a portion of bread and butter. Now, stop right there. We’re not talking your standard-issue crusty hunger-staver here. This is the sort of thing that The Creameries is doing exceptionally well: light, fresh bread packed with flavour, baked mere yards from your table. And then there’s the butter. Yes, it’s made here too, with a variety of different options. We had the whipped brown butter, a confection akin to savoury ice-cream froth. You could cheerfully eat this all the day long, but the mains were waiting. 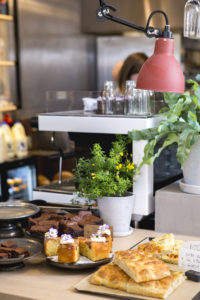 We went for two different focaccias, one with beetroot, rosary goat’s cheese and sorrel and the other a rosemary variety with slow-cooked goat ham, rosary goat’s cheese and sauerkraut. Both were terrific and beautifully baked. Goat’s cheese can sometimes be on the dry side, but here it was used sparingly and the result was crumbly and intense with a melt-in-the-mouth texture. A small side salad might make a good complement, though. The goat ham was crisp and flavoursome and the subtle assortment of ingredients blended together beautifully. 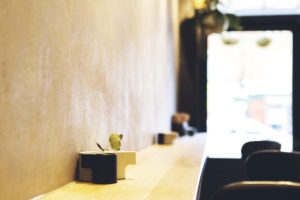 Had we left room for dessert? You know it. And to be fair, even after all that bread of different kinds, we weren’t feeling anywhere near bloated. If you’ve been paying attention so far, it’ll come as no surprise at all that the cakes were flippin’ superlative. In the interest of thoroughness alone, we ordered three. The chocolate orange tiffin was nothing like the headache-inducing cocoa-overload stodge of the same name. Instead it was a soft, tangy and chewy delight. The gluten-free blackcurrant cake made with polenta was seriously light and refreshing and just the right side of sharp. Finally, the stem ginger cake was expertly done and offered bursts of flavour with every bite.

All in all, then, what’s not to like? The Creameries is a pleasant, welcoming, easy-going environment offering top-notch fare at prices that won’t break the bank. If delicious, daisy-fresh cooking and baking tickles your fancy, you may find it hard to resist. It remains to be seen if the space will feel as cosy in the winter months, but it’ll be a pleasure to find out. So welcome to the neighbourhood, The Creameries. We’ll be back again soon. 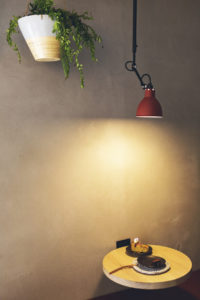