Viv Albertine tells an illuminating tale about her wilderness years spent trapped in a dreary, constrictive marriage. She’d sit at dinner parties next to business types and have nothing whatsoever to say to them. “I was nothing. I had no thoughts”, she says. Which is tragic, as back in her early 20s she’d had the remarkable experience of being the lead guitarist in all-female punk group The Slits, breaking all kinds of cultural boundaries while associating with the likes of The Sex Pistols and The Clash.

Albertine goes on to explain that she finally escaped from her rut by running along the local beach, forcing herself to have opinions about the buildings that she passed. Bit by bit she rebooted her sense of self and the thoughts haven’t stopped since. She’s filled two books with them – 2014’s phenomenal, enlightening memoir Clothes Clothes Clothes Music Music Music Boys Boys Boys and the just-published To Throw Away Unopened, a thematic reflection on the woman she’s become. 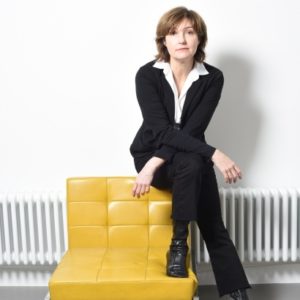 Tonight, as part of her promotional tour for the new book, Albertine is at The Dancehouse courtesy of Manchester Literature Festival. The event is chaired by Jeanette Winterson, who clearly understands and appreciates Albertine enough to sit back with confidence and let her talk with just the occasional leading interjection. Winterson does right. Albertine in full flow is fascinating, funny and inspirational (this writer saw her in conversation in a music festival literature tent back at the time of her first book, at the end of which the interviewer broke down in a flood of admiring tears).

The discussion here covers all things Albertine and therefore the ground of both books. She describes life in north London in the early 1970s as being every bit as bland and dreary as the 1940s, which helps to explain the pull of punk. However, she notes that there was a great deal of resistance from those concerned to call the movement anything at all for fear that, once tagged, it would then be de-fanged and boxed up. At the time, of course, women just didn’t go around forming bands – Albertine reckons she was one of about five female rock guitarists in the country – but she took as role models the likes of Yoko Ono and Patti Smith, as well as designer Vivienne Westwood. These days, she feels that The Slits’ innovative approach has never been bettered, but confesses that she can’t listen to music at all. In particular, bad songs make her want to kill those responsible.

This issue of anger permeates the whole conversation. Albertine says that she initially set out to write her second book as a novel about a middle-aged woman so incurably furious that she resorts to murder, with a detective on her trail trying to figure out what drove her to it. In the event, though, she was swift to realise that essentially the angry woman character was her, minus the actual killing people bit. The end result is that To Throw Away Unopened explores everything that’s made Albertine who she is today, and she estimates that 99 per cent of her anger stems from her late mother.

Her first book blew any expectations about a bog-standard rock star autobiography clear out of the water, and the second is equally as sharp, smart and articulate. In the flesh, Albertine is every bit as spellbinding. There’s a sense that, on emerging from her domestic fug, she was struck by the fact that she’d become a legend to music fans, and that she’s since set about enthusiastically dismantling that legend. Certainly she’s brutally candid about her own experiences, whether discussing those anger issues, her anxiety about body hair or the experience of playing live with The Slits while literally dripping with spit (she also reveals that the one section she was advised by an editor to take out of her first book involved the ‘unlady-like’ act of farting). 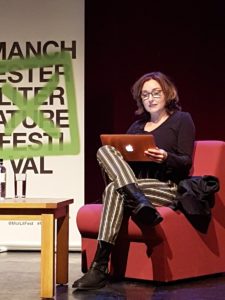 When Albertine concludes that she now understands the legacy of anger left behind by her mother – “I was made a warrior” –  it’s the perfect full-stop moment, and everyone present knows it. Evidently she’s come to make sense of herself by telling her story, and whether in print or in the flesh, it’s a story very much worth hearing.