Occasionally this job throws up seriously difficult decisions. Last Wednesday was one of them: do I go to Christine and the Queens at Manchester Apollo or to The Creameries in Chorlton to sample Mary-Ellen McTague’s first Christmas menu? Guess who won. 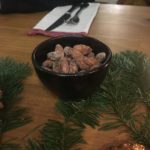 Two little bowls of almonds, one roasted with crushed pink peppercorns for veggies and one roasted in venison fat for me. Then a gougere dusted with cauliflower ash. What? It’s a black dust that tastes of cauliflower on a warm choux bun containing a melted cheese which has the nose of something French and runny but is a mixture of two English hard cheeses melted in the baking. Yummy.

Then some extremely impressive bread – sourdough or focaccia, baked on the premises. You can assume everything is made on the premises including the butter, of which there are two types, a white whipped nut butter and a yellow cultured butter. Meanwhile, the home smoked mackerel is translucent, almost like a ceviche, and comes with a delicate mustard cream and rye bread that’s virtually a pumpernickel, all of which marry nicely. But I worry that the marriage of the butternut squash soup and its Beenleigh blue cheese dumpling is heading for the rocks. The broth was delicate and delicious but the dumpling had a grainy texture and a strong cheesiness which led me to wonder what it was doing there. I’m sure the broth felt the same. 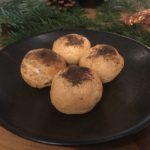 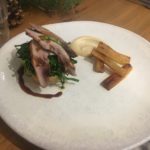 Pheasant pie was a dark delight. With slices of poached pheasant breast on top (not too pink), a layer of dark green sprout tops and then the pie, a beautiful crust made from duck fat and pheasant stock, containing confit leg in a liver parfait and game sauce. Salsify chips, celeriac puree, and game jus dress the plate. Carnivores, what are you waiting for? And there’s a Butter Pie for veggies, containing Charlotte potatoes, butter, thyme, garlic and other lovely things. I’m sure it’s delicious.

Oh my. Christmas Pudding with Brandy Sauce or Hazelnut and Rosemary Parfait with Pedro Ximenez and Hazelnut Brittle. Choose! The pudding is light but fairly heavily spiced and made with goat suet so non-veggie, but they do have a veggie version. The parfait is veggie, very light, and the sauce is extraordinary. Pedro Ximenez is a white Spanish grape that they turn into the darkest of dark sherry, only here it’s imported by the English Whisky Company (what?) who use the PX barrels to mature their whisky, and decided to leave the PX in the barrel too. The result – against my mother’s best advice never to mix the grain and the grape – is a whisky flavoured sweet sherry, which zhuzhes up the parfait without overbalancing it, although it nearly overbalanced me.

As for the wine flight, should you so wish, it consists of a Col Fondo Prosecco which is made in the old fashioned way, matured in the bottle like champagne rather than a huge aluminium vat. This means that it’s cloudy and slightly dry. Then a glass of Weissburgunder 2017, a delicious biodynamic Austrian white which is dry-ish with lots of fruit. The red we drank was Nao Condemnado 2017, another biodynamic wine with a DOC (quality assurance label) that requires it to be handmade in the 800-year-old tradition of the Cistercian monks. It’s spicy, light to medium weight, but not very long. The knowledgeable Ian Gatenby, our guide through the meal, seemed to think it wasn’t drinking at its best. There may well be a different wine when you go, which I hope you will.

To finish there’s a little plate of Gold Frankincense and Myrrh chocolates. You can imagine what’s in them. It doesn’t sound very appetising and you’ll be full by then anyway, so I suggest you put them in the envelope provided marked ‘For Chris Wallis’ and I’ll dispose of them later.