An accidental history of football gaming: a decade of revolution

Chris Holmes March 21, 2016 Gaming Comments Off on An accidental history of football gaming: a decade of revolution 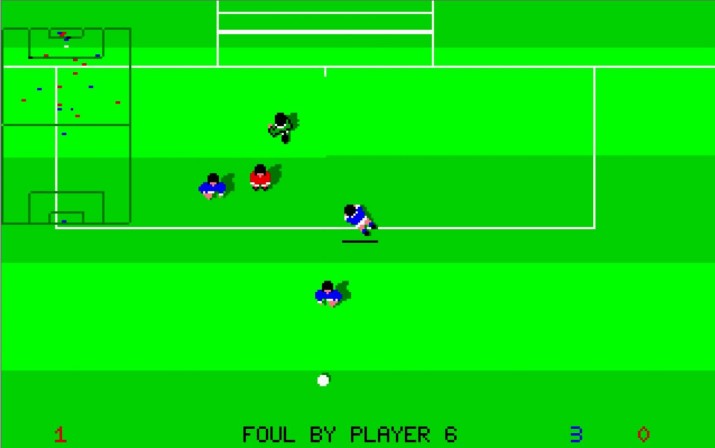 Football games have existed since the video game industry crawled from the primordial soup of late 70s coin-ops. Whether co-existing as an easy bedfellow with an enthusiast’s ‘real game’ schedule or providing a deep simulation experience, for those who spend lunch breaks scrawling formations on a bit of paper, such titles are the first mark on the gaming calendar.

In this two-part article Chris Holmes takes a look at some pivotal moments in the history of gaming and the football titles that helped to define them.

Binatone Football
The Binatone TV Master took the game of Pong and, via a pair of dial controllers, brought ‘all the atmosphere’ of football, tennis and squash straight to your early 80s wood-panelled television. Football on the Binatone was an innovative little Pong variant consisting of two layers of ‘bats’ which represented the outfield and goalkeeper.

In case twiddling your dial and controlling two sets of paddles wasn’t tricky enough, difficulty could be ramped up by reducing the size of your bat and increasing the game speed (no dark art of scripting here – take note EA and Konami). To this day football games with an overtly arcade feel are referred to as ‘pong’; a marvellous nod to this archaic console and its siblings, ensuring a place in the annals of football game history. 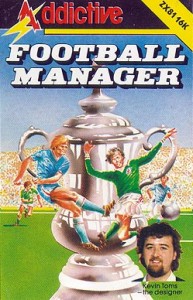 Match Day 2 and Football Manager
The halcyon age of gaming for those plunging into their 40s was the era of the ‘8 bit’ and, specifically for many, the Sinclair ZX Spectrum. While the classic rubber-keyed Spectrum eluded me, huge amounts of parental hounding led to a wolf in sheep’s clothing entering my life in the mid-80s. The Spectrum Plus 2 was in equal parts the love of my life and satanic frustration due to its frequent crashing and incompatibility with a fair proportion of games.

Despite this, two stellar football titles worked on the Plus 2 without a hitch, thus becoming my ‘go to’ tapes and serving as a catalyst for my embryonic passion of football gaming.

The first to hit my malfunctioning tape deck was Football Manager, an early precursor and very different beast to today’s namesake. Despite lacking any of the depth or realism of its modern equivalent, it provided managers with many moments of hard earned joy as your stick man striker bore down on goal, all sorts of invisible parameters leading to one of several animated outcomes. Despite its basic spreadsheet feel, the fact that Football Manager managed to squeeze a living, breathing a Lowry-esque world into a few kilobytes, was nothing short of a miracle. Nevertheless, for all its ground-breaking ingenuity, it was vital not to leave your imagination at the door.

Then along came my first ‘true’ football game and I was blown away. Match Day 2, developed by Jon Ritman (of Head Over Heels fame), may have featured ball physics from the moon but that was of no consequence to this awestruck young gamer. From headers to lofted passes, Match Day 2 had a level of control previously unimaginable when twisting those Binatone dials or watching a stickman Kenny Dalglish thrash another pixel into the net. 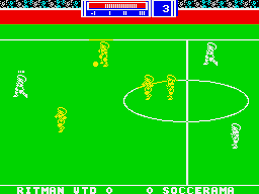 Perhaps most importantly, Ritman also developed a Diamond Deflection System which took into account a variety of parameters when ball and player met. From the trajectory of the ball to the positioning of the player, the game represents one of the first coded attempts to replicate the subtleties of the sport. Exceptionally basic by modern standards, it nevertheless provided a precursor to the more sophisticated physics systems employed today.

When viewed through the prism of its contemporary titles, Match Day 2 was a triumph and should be revered as the grandfather of today’s football games.

Kick Off 2
When the 16 bit era was ushered in I found myself (as an Atari ST owner) trying to justify an inferior system to the playground scorn of Amiga owners (the undisputed king of home computer gaming at the time). The ST was second best in all the areas that counted – graphics, sound and internal components.

Nevertheless, for somebody raised on 8 bit monochromatic graphics and tape decks, the ST was a dream. With its heady brew of quick loading times and colour, another sequel was to leave its boot print on football gaming history. 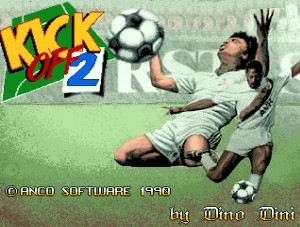 Amid a rash of inferior titles named after famous players, from Graeme Souness to Gazza, a classic football game stood head and shoulders above the rest – Kick Off 2. Developed by the genius of Dino Dini, the Kick Off series was a manic top down slice of football heaven, played at a searing pace and complete with stunning Roberto Carlos-esque curlers and vicious sliding tackles unleashed from halfway across the pitch. I proudly owned what I believe to be the definitive version – the World Cup 90 special edition replete with a plethora of international teams and fictitious players.

There’s no doubt that the demonic speed of the game would be sniffed at nowadays, but on those long Sunday afternoons with a couple of mates it was polished two player perfection. In terms of innovation, Kick Off was also the first game that truly appeared to treat the ball as an independent entity, leading to a level of unpredictability and goal mouth scrambling which built on Spectrum-era physics, lifting football gameplay to new heights.

This randomness combined with outrageous levels of addiction meant Kick Off 2 was a unique and joyful ode to a sport witnessing its own renaissance in the wake of Italia 90.

Fifa International Soccer
As we all know, time and technology wait for no man and even as I was wrenching my poor joystick out of its socket (that’s not a euphemism folks) and sharing in Gazza’s misery at Italia 90, a new Godzilla of gaming was rising from the East, built on Japanese sensibilities and designed as a pure games machine. 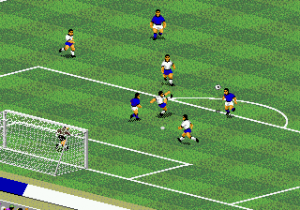 I admit to not having a personal affinity with the Sega Megadrive or Nintendo platforms of the time given I’d temporarily abandoned gaming in the often fruitless pursuit of the teenage meaning of life: alcohol and girls. However, despite the platform being marketed towards a more adolescent demographic at a time when I was way too adult for such fripperies, one title caught my eye – FIFA International Soccer.

With its much vaunted isometric viewpoint, this patriarch of EA Sport’s hugely successful franchise was an eye catcher that, while once again focusing on international teams with fake names, was also the first step down the path of true simulation. The game eschewed the more arcadey feel of its predecessors for a slower, more considered approach and wowed with presentation and sound that would became the hallmark of EA’s games.

Although there were well-publicised cheats which made scoring a walk in the park for those with little imagination or will power, there were significant advancements in AI and strategy which forwarded the concept that football gaming could be a single player pursuit.

So, despite my lack of connection with the platform, FIFA certainly suggested at greater things to come. While it lacked the addictiveness of its heavyweight predecessors, International Soccer should be remembered as a key marker laid down by one of the most important and divisive developers in football gaming history. EA’s timing was also opportune, given the industry was reaching a pivotal moment as more powerful consoles began to squeeze home computers out of the market.