Kids can be an ungrateful bunch can’t they? Back when I was sticky-fingered and scabby-kneed, I loathed the free violin lessons that were my right as a free-born citizen of the Socialist Republic of South Yorkshire. I resented every minute spent at free drama groups, again council-funded, when I could have been at home watching Swap Shop. And the only good thing about my free council-run art club was darting out of the door and buying a copy of Krazy comic on the way home.

Really, I didn’t deserve all that 1970s public purse largesse.

And then there was The Red Balloon, the classic wordless 1956 French film which was a favourite (of teachers, that is) in classrooms all over the land. In that pre-VHS age, Miss would spool a dust-flecked print of the half-hour movie onto a juddering 16mm projector and us kids would gaze up at the flickering frame through our Golden Nuggets sugar-rush comedown. We watched a young polo-necked Parisian lad pursue a spooky balloon through the streets of his city, but instead of marvelling at its acclaimed visual poetry we just wondered why it wasn’t as exciting as Starsky and Hutch.

The comic writer and broadcaster David Quantick nailed it when he parodied the film as a fictional, but oh-so-possible Swiss TV series called The Boring Kite. 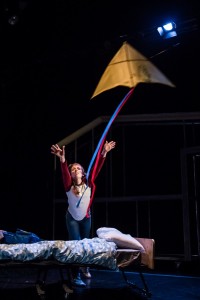 So perhaps I wasn’t the best person to review a wordless play called Kite – a title seemingly designed specifically to mock my cynical memories. However, it appears that in the intervening 40 years, my tastes have changed. Within moments of lights-down, this non-boring Kite was tossing my emotions on a poetic breeze formed from theatrical invention and skill. By the end I was damp-eyed and drained, hardly able to catch my breath as its echoes began to fade on the wind.

Kite, created by Devon-based company The Wrong Crowd and beautifully directed by Rachael Canning, is currently touring in association with Soho Theatre. I caught it at Liverpool’s Unity Theatre where it blew in for just a couple of nights before being carried off on the rest of its journey.

The story is a simple one. In the midst of grieving for her recently-deceased mum, a young girl is forced to leave her family home by the sea to go and live with her grandmother in London. She really really doesn’t want to go, but when a strangely sentient-seeming kite flutters into her room, it leads her and her grandmother on a journey towards another kind of life.

From these raw materials, The Wrong Crowd has fashioned a delicate miniature artwork – just an hour long, but dense with human truth and vivid emotion. Entirely wordless but achingly eloquent at times, it says more with its fluid movement and intricate choreography than most plays manage in 100 pages of text.

The show is hung from a single hour-long soundtrack by Isobel Waller-Bridge, part original composition and part sound-effect extravaganza, with whistling wind overlaid onto whispering sea-shores and hectic London streets. It might best be described as a dance piece if it wasn’t for the fact that the performers aren’t dancing. Instead, they move expressively and gracefully in and out of the interlocking scenes, always synced perfectly with the audio in a manner that I might have admired as technically accomplished if I hadn’t been so caught by its dreamlike narrative tug. 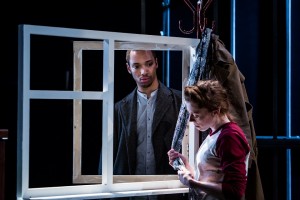 There are only two human characters in the story – Charlotte Croft as the girl and Liz Crowther as grandma (both wonderful) – but they are joined on stage by the almost ever-present Nicola Blackwell and Linden Walcott-Burton. I would be doing these latter two performers a disservice if I described them simply as puppeteers, although they do use puppets extremely well. It would be fairer, perhaps, to think of them as reality animators, as they give life to books, to newspapers, to umbrellas, to dustbins – or rather, they conjure up the wind that pulls at everything it touches.

Ultimately, however, it isn’t the technical accomplishment that makes this play so affecting and often so heart-breaking. It’s the way that deep emotion is rendered so recognisably and unsentimentally that really makes it resonate long after it’s over. As the grieving girl hangs her mum’s dress beneath a photograph, positions mum’s shoes below the hem and sprays mum’s favourite scent, we know deep down inside ourselves how she’s feeling – how it is to clutch at a reality that we can never experience again, to wallow in a sensory illusion because the real thing has vanished from our lives.

There are many such moments in Kite, along with London streets so busy you can taste the pollution, a wind so strong you can feel it fighting with your brolly, a house so empty you sense its silence like a pain. How I hope that today’s kids are more open to beauty than I was when faced with The Red Balloon, because this show is much more than an hour in a theatre.

It’s a wind-blown gift, and every child should catch it if they can.

Damon saw Kite at Liverpool’s Unity Theatre. You can catch it on tour until April 9, 2016. More details here.