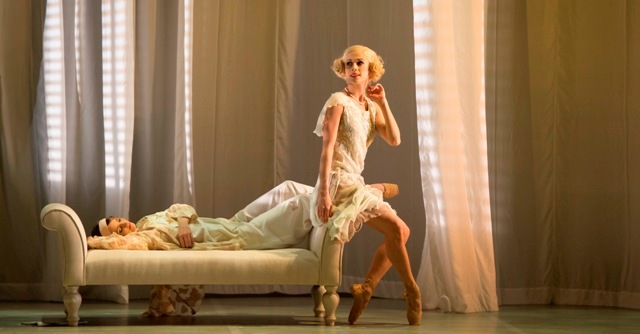 Northern Soul‘s Rich Jevons talks to Northern Ballet’s artistic director David Nixon about his early days as a dancer in Canada, his adaptation of Bram Stoker’s Dracula and F. Scott Fitzgerald’s The Great Gatsby, as well as the more family-orientated productions of Cinderella and Peter Pan.

Northern Soul: Could you tell us a bit about what led to your early interest in dance and your days at the National Ballet of Canada and then working with the National Ballet of Canada?
David Nixon: I was always dancing around the house and asking for dance lessons. I didn’t really have a concept of what that meant but I just wanted to dance. I lived in a very small city in Canada and it became evident that if I was going to be serious about having a career I would need to go away to school. I went to the National Ballet School of Canada at 12 and spent six wonderful years there studying with an exceptional staff. I followed on from this joining the company in the summer of 1978 and progressed from the corps to principal dancer. I was the last dancer to be personally prepared for Swan Lake by Erik Bruhn which was an amazing moment in my career and I also danced with all of the leading ladies.

NS: Some of your works from BalletMet have been revived. How does it feel revisiting these old pieces?
DN: I love to revisit my older works more for my dancers than for myself. In most of my works there are absolutely wonderful roles for dancers to invest themselves in technically and artistically. It is the work on such roles that develop the dancers to new depths of performance. Audience members often comment that they have seen that work already but with stories the characters are always slightly different and there is so much in these works that can not be fully appreciated with one viewing.

NS: How did you first approach adapting Bram Stoker’s Dracula?
DN: My approach to interpreting Dracula was to familiarise myself with the novel and other retellings. It was fascinating that what I thought to be a light work was a much more thoughtful and detailed story. I realised that a linear version would not really be interesting so I started from the point of selecting the images or moments from the book which remained most clearly in my mind. I then thought about what underlying themes most interested me and devised the narrative from the marriage of these two roads.

NS: Dracula is traditionally a dark character of pure evil. How much have you allowed the dancers to capture his humanity as well?
DN: Dracula is pure evil but in more and more retellings of the vampire story the thought that vampires can also love and even moderate their behaviour has become a common theme. I proposed the question that love can dominate us no matter who or what we are and dictate our destiny. This was not limited to Dracula but included Mina who also goes against all she is because of a love she cannot resist. In loving Mina, Dracula expresses what is left of the human and resists even his own nature.

NS: How do you cope with the cape, the fangs, the wig and all the other trappings that go with the vampire character as a director and costume designer?
DN: These attributes are necessary to create an image that is what is expected of a vampire especially when the audience is close. The fangs play an interesting role as when the dancer puts them in his face, it becomes altered and the feeling they have when opening their mouth forces them to do so in a realistic manner. The cape is hard work, it becomes a part of the dancer and another partner. It is tiring to use but creates a unique movement and gives the illusion of the bat and flying. 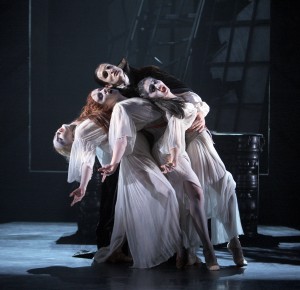 NS: What would you say are the main themes of the piece? Death and sex?
DN: Sex seems to be the theme of most things and it is very strong in the vampire as it is the vampire’s irresistible sexuality and complete lack of morality that lures in the victim. Death of course is key as becoming a vampire bypasses the unknown journey of death and allows the human to exist forever. I think that there are other themes equally as strong. Love in all its faces plays a big role. The chivalrous nature of men to be the protector and to defend against evil and their fear of women becoming dominant which was very relevant when the book was written. Our ability to resist temptation and the various points where we weaken. The question of science, religion and superstition – where do they meet?

NS: What in particular interested you about F. Scott Fitzgerald’s The Great Gatsby?
DN: The Great Gatsby is a wonderful story with fascinating real characters. It is set in one of the most magical, musical and dance crazy times. It became obvious to me that though there would be many challenges in telling the story it would ultimately prove to provide a great vehicle for the company’s talents and a most engaging show for the audience.

NS: How have you gone about conjuring up the Jazz Age of the roaring twenties?
DN: The twenties are brought to life in various ways. The costumes are very much of the era as is some of the music. The sets, though simple, combine beautifully with Tim Mitchell’s lighting to create pictures reminiscent of Hopper paintings. The dancers were all immersed in information from the time and had lessons in the Charleston. The overall look of the show is stunning.

NS: Do you think the piece address the essential failure of the American Dream, the dirt beneath the veneer?
DN: I believe that from Fitzgerald’s point of view there were questions about the American Dream, what it really was and what was perhaps the actual cost. For me he was also responding to a brief respite from war where people’s behaviour totally changed from what it had been and the carefully drawn lines of morality had been swept away. I think that there is the purity of the American Dream at the heart of Gatsby, a man who believes anything is possible no matter where he started or what education he had. It is his ability to see beyond all things to a world of his own creation, even erasing time, that personifies the naivety of this dream. Underneath this is however the corruption and the complete antithesis of this dream that becomes its actual foundation. Part of the reason this story survives is that we still long for that elusive American Dream and we still have hope of its eventual reality. 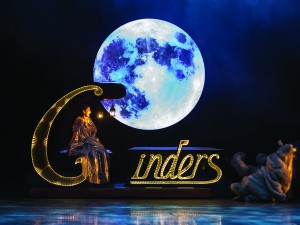 NS: And how have you approached conjuring up the magic of the Cinderella fairytale?
DN: Thanks to Patricia Doyle, who wrote the scenario that the ballet is based on, we managed to take a new and different angle to the ballet. Placing the story in Imperial Russia offered the possibilities of wonderful scenes; a Petrushka-like winter market, a frozen lake and the defined classes of royals, aristocrats and serfs. The Fairy-Godmother becomes a male magician and literally transforms Cinderella on stage and turns her stove into a sleigh. The love between prince and servant girl becomes more complicated and has a hint of Pride & Prejudice.

NS: Do you enjoy putting on a special Christmas piece that appeals to the family like Peter Pan?
DN: We had a lot of fun creating Peter Pan which is quite a different sort of ballet for us. It was particularly fun to watch the dancers turn into young children and for us to develop our spectacular flying scenes.

NS: Can you tell us about the technical aspects of this production to create the flying scenes?
DN: The flying scenes are very challenging as I felt dancers should be able to do more than other performers, except perhaps circus performers. It takes several technicians working in the wings to make the dancers fly and this has to be extremely well coordinated. The set is also on a turn table stage which comes with its own complications and our crocodile takes two dancers to operate.

NS: Were you particularly keen to capture a child’s point of view?
DN: Peter Pan was intended for children and I find they understand what is going on sometimes better than the adults accompanying them. We wanted imagination to be at the heart of the production and this is key for a younger audience. Adults often have such clear expectations that they cannot recognise something that is slightly different. Children on the other hand are completely open and come on the journey to Neverland with us every time we perform the piece. It is a wonderful show for the whole family and there is something there for all to enjoy.

Click here for full details of Northern Ballet’s productions this autumn starting with Dracula at West Yorkshire Playhouse in September.