“Believe it or not, I’ve only ever watched up to season four of The Walking Dead,” Charlie Adlard admits to Northern Soul.

For those of you unfamiliar with Adlard, he is best known as the illustrator behind the apocalyptic zombie comic book series The Walking Dead. The last time Northern Soul spoke to him, Adlard was on the cusp of becoming Comics Laureate. Now it’s a year on from him taking over the role from Dave Gibbons, the comic artist behind Watchmen? As it turns out, Adlard has approached the Laureateship in a different way.

“My eldest son is quite badly dyslexic,” says Adlard. “And comics were the only things he read willingly – and he will read a comic more readily than a book or a newspaper. Going back a few years, I was doing a signing in Forbidden Planet in London, and I told the boys to go and do a bit of a trolley dash around the shop, the shop had kindly said to get whatever they want, and my eldest came back with a copy of Adventure Time. I assumed he was going to get some kind of action figure. But no, we got back to our hotel room and the first thing he did was just take himself off and read it. What he did really helped him in terms of reading.” 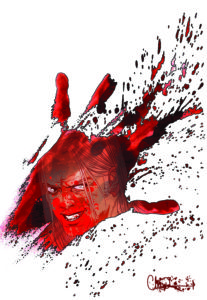 There’s so much pride in his voice as he tells me that his son has read all of The Walking Dead comics, and much preferred them to the TV series. I can’t stop thinking about how cool it must be to have a dad who illustrates such a widely admired comic book series, let alone getting to do a trolley dash around Forbidden Planet.

I ask Adlard what he thinks of the TV adaptation – I can’t resist – and we both giggle as he admits he hasn’t seen any of the recent episodes.

“Every time I think about watching it, it feels a bit like doing homework, which is not to take away from how good the show is. It’s just, I’m watching the same plot as what I’m illustrating. There’s no big surprises. When I’ve got more time, I will probably binge-watch it, but at the moment I’ve come to a grinding halt at season four.”

I don’t I blame him. I mean, when I’m not writing I work in a coffee shop and I can’t think of anything worse than consuming more coffee once my shift ends. But, as a literature student, I’m desperate to know more about the comic form and obtain an insight into Adlard’s thoughts on what a comic can do, compared to a piece of fiction.

“I do believe it’s its own art form,” says Adlard. “A medium not a genre. So, because of that you have to work at it as you would with a book or a newspaper, but because it’s ease of reading, it can give people a sense of achievement, especially reluctant readers because they can finish it easier. You can get to the end a lot quicker with a comic than you can with a novel. It boosts the confidence that they can actually finish it.”

When I was growing up, comics weren’t taken seriously. They were a bit of fun, created solely for the entertainment of children, which leads us into a conversation about the snobbery that surrounds reading comics. 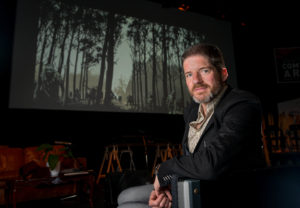 He’s not in the least bit surprised to hear that on my BA English Literature Degree, I only studied one graphic novel, Bryan Talbot’s Alice in Sunderland. But that’s one more graphic novel than most literature students examine. Generally, graphic novels aren’t regarded as a form of literature. We both agree this is ludicrous, and that the graphic novel has just as much to offer than any other form of novel. Yet its validity in the literary world is questioned.

Considering the snobbery that surrounds the artform, I start thinking about how difficult it must be to launch a career in the comic art world.

“No one is in control of us,” says Adlard. “We do what we want and the characters are ours. The TV show is based on our characters, but the funny thing is, while I’m working away in my little studio in Shrewsbury, you forget that you’re indirectly in control of this vast empire that The Walking Dead created. Whereas if you work for Marvel or DC, for example, they’re in charge of you.

“I will always say for the rest of my career, I’m just not interested in other people’s characters. I’ve been spoilt with 14 years of The Walking Dead and it has financially given me the ability to be able to say that.”

The big question, that I’ve been itching to ask from the moment I picked up the phone to Adlard, is: DC or Marvel? It’s the most important question for any comic book fan. 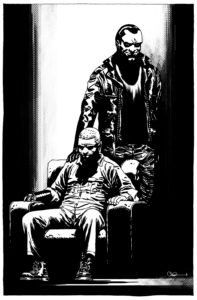 “The Marvel stuff is most definitely my childhood favourite,” he says. “Particularly The Fantastic Four. I liked it because not only was it superheroes, but it was more science fiction themed than the other comics. At that age I was into Sci-Fi, space and monsters, but it’s one of the few superhero comics I will probably still read.”

I could spend all day chatting to Adlard, but I have to let him get on with his preparation for his appearance at The Lakes International Comic Art Festival, which he’s particularly excited about.

“This is my favourite comic art event,” he enthuses. “And what I love about it is the variety of stuff they do here, and the variety of stuff that they give me to do. I’m not just sat down at a table signing things for two days, which is fine, I love meeting the fans, but it’s the interesting stuff you get to do. Like on Sunday, I’m doing an appearance with the graphics tablet company and doing some drawing on their equipment, and then going on to do a 40-minute workshop with kids after that.