Within the field of modern comics, Watchmen and The Walking Dead loom very large indeed. On its first publication back in the mid 80s, Watchmen completely rewired the superhero genre, the reverberations of which which are still being felt today. On the other hand, apocalyptic zombie epic The Walking Dead is perhaps the most widely-admired comics series of recent years, has become a worldwide phenomenon and spawned a smash-hit TV adaptation.

A factor which links the two series is that they’re both illustrated by esteemed British artists: The Walking Dead by Charlie Adlard and Watchmen by Dave Gibbons. This month Gibbons has come to the end of his two-year tenure as the UK’s first-ever Comics Laureate and Adlard has been announced as his successor.

This announcement was made at Kendal’s Brewery Arts Centre as part of the annual Lakes International Comic Art Festival, a three-day celebration of the wide world of sequential art. The Laureate post was created to act as an ambassador for the comics world, particularly in working with schools to spread the word about the particular merits of the medium. Speaking exclusively to Northern Soul, Charlie Adlard says: “It’s a bit of a challenge, actually, to take on after such a formidable guy as Dave, but it’s a challenge which I readily accept. Hopefully I’ll be able to rise to the occasion.” 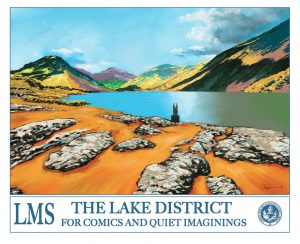 Adlard is passionate about the role, and brimming with ideas of where to take it.

“For one thing I’d like to focus on how comics can help, not necessarily just children, but adults as well, with reading difficulties. It comes from quite a personal space because my eldest son is dyslexic so I know what it’s like. It runs quite rife through a lot of my wife’s family as well. The only time my eldest son has ever read willingly is comics, so you think there’s got to be a co-relation somewhere, whether it’s the combination of words and pictures, or the fact that they just appear less threatening because the dialogue and the words are split up into digestible bits.”

Candidates for the Laureateship are nominated but, despite his enthusiasm for the post, Adlard had no prior expectations about landing it.

“I didn’t think I was in the running,” he says. “I didn’t even put myself up for it. To be honest, I just thought it would go to a writer, because, y’know, writers are perceived as being more erudite than artists. Artists just draw the thing and that’s it, whereas the writers can at least talk about whatever they’re drawing. So it’s interesting that it’s gone first off to Dave who, even though he’s a writer as well, is primarily known as an artist. Now it’s gone to me and I’m certainly no writer.”

The first Adlard knew about his name being mentioned in relation to the post was when he was contacted by Julie Tait, director of the Lakes International Comic Art Festival.

“She said, ‘you’re in the running, I just want to check that you would be interested before we take it any further’. Then I thought about it, talked it through with my wife, and in the end we both agreed that it is an honour and it’s one of those things you just can’t really turn down. I mean, I’m ridiculously busy but we just said, ‘no, we’re going to make this work’.” 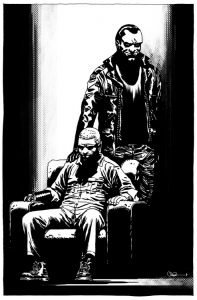 Just before relinquishing his role as the outgoing Comics Laureate, Dave Gibbons told Northern Soul: “I’ve really enjoyed it. It’s amazing to think that it’s been two years. To begin with, we got quite a flurry of interest from the press in quite a jokey sort of way – ‘You’ve heard of the Poet Laureate and the Children’s Laureate – well, now comics have got their own Laureate’. We got a good bit of publicity for that.”

During his time in post, Gibbons was keen to promote the educational potential of comics. He acted as consultant to Oxford University Press on a well-received new series of ‘graphic texts’ and he spoke at several schools-related events.

“I went to a Schools Library Association Meeting where there was a roomful of school librarians. Then a bit later I did a National Union of Teachers meeting which was a conference called Reading for Pleasure. In both of those cases, I was absolutely amazed to find that I was actually pushing open a door that wasn’t really even locked. There was an enthusiasm for comics there among librarians and teachers. Lots of them were Watchmen or 2000AD fans anyway.”

For the uninitiated, 2000AD is the seminal weekly British sci-fi comic which has launched the careers of generations of writers and artists in this country. This month, it celebrated the publication of its 2000th issue. Gibbons was a key contributor throughout its early years before working extensively for leading American publishers DC Comics.

Adlard also started out as a regular on 2000AD, and then moved on to other titles including Mars Attacks, The X-Files and Shadowman. For all the other comics credits to his name, though, these days he’s usually billed as ‘Charlie Adlard of Walking Dead fame’. Thankfully, that’s a situation he’s comfortable with.

“In the end, to be known for something is better than not to to be known at all, so you’ve got to be thankful,” he says. “I think most people that are associated with some sort of franchise will eventually cuss and moan. Like everybody else, you’re trying to say, ‘well, I can do other things!’. It’s something I’m always trying to do myself. Like for instance with [this year’s Comic Art festival in] Kendal, I contributed a piece of art for the Beatrix Potter exhibition. As soon as Julie Tait asked me to do that, I thought, ‘right, I’ll say yes to that. It’s something so different from what I usually do and something that people wouldn’t assume that I would do’. So I’ve got to admit, I’m conscious of that.” 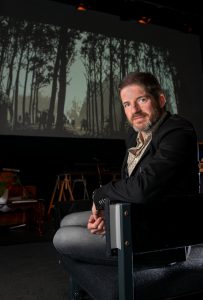 In practice, Adlard’s approach is to vary his output as much as he can.

“Everything else I do outside of The Walking Dead, I try and do it as differently as possible. If I was to have the time to do another project, to do another horror thing or another zombie thing – well, a) it would be ridiculous to try that, because I’m already doing it. And b) I don’t really want to do that. I want to do a variety of things. But of course, it all still goes back to The Walking Dead and I’m certainly not going to diss my bread and butter. It just seems really disingenuous to do that. I mean, to be honest if it wasn’t for The Walking Dead I probably wouldn’t be here talking about the Laureate, because that’s what’s put me on the map and what people know me for. It’s what’s made me, in inverted commas, ‘famous’. It’s a useful thing to have when I go out there into the general public. Hopefully they would have heard of at least The Walking Dead TV series so they could put a name to it.”

The phenomenal success of The Walking Dead, not least the TV version, hasn’t quite managed to change the working relationship Adlard has with it.“In the end my personal attachment to it has not changed over the 12 years. I still get up every morning and go into my studio and draw a comic book, as simple as that. The mega success of the thing is generally happening across the Atlantic. I mean, I’ve been on set a couple of times. I’ve been to big American conventions where the queues go right around the block and everything. That’s pretty much the only time you kind of think, ‘ooh, this is quite popular!’.

“Generally my day is just spent drawing a comic book. I don’t even think about the people that are kind of relying on what I draw. It’s become this massive machine, but in the end it’s Robert [Kirkman, Walking Dead creator/writer] and myself who are controlling it and if I’m not drawing it, the thing just stops. The same with Robert. If he doesn’t write it, the whole machine would fall apart. You don’t want to think about that, because then suddenly there’s this immense pressure. Thankfully I seem to have some sort of mental blocker on that side of it and it’s still, for want of a better word, the day job. It hasn’t changed and long may that continue.”

Dave Gibbons speaks warmly of the man to whom he’s passing over the Comics Laureate mantle.

“I’m very happy to hand it to Charlie, who is a very decent bloke, a great artist, very prolific and whose work is enjoyed worldwide. He’s a really worthy successor and I’m very happy to put it in his charge. I suppose it’ll be a bit strange, because nearly every interview I’ve done these two years has made reference to me being the Comics Laureate. Ex-Presidents of the USA always get to be called Mr President. Perhaps I’ll always be Mr Laureate or something. But no, I feel I’ve had a good innings and I’m happy to let someone else have a go now.” 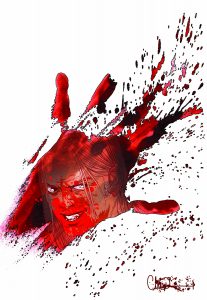 Gibbons reckons that overall the status of comics in the UK is on the up. “There was a story that I told when I was made Laureate about how comics were viewed when I was at school, which was that they actually took them from our desks and burnt them. I mean, that’s where we were. Admittedly that’s a fair time ago now, whereas today most teachers are familiar with comics. I think it was no accident that the NUT conference was called Reading for Pleasure, because I do think that’s the thing that you want to inculcate in children, that reading is a pleasure. It’s not a duty or a obligation. If you can attract them to that personal, intimate joy of sitting down with a good book, then I think that’s one of the most worthwhile things that you can do.”

Adlard adds: “Half the job of being the Comics Laureate is to actually go out there and try and tell people that the comics industry which they perceive to exist is probably not the comic industry that is actually out there. There’s a lot more to it than you think. In this country we have a bigger hill to climb, more than pretty much any other Western country. There are places like Japan and France and Finland which have a massive comics culture. Unfortunately the UK’s way is way down on that list. So having stuff like the Lakes International Comic Art Festival and the Laureate is a great leap forward for the medium. Hopefully we’ll be able to get the general public interested and show them that it’s not just about superheroes or whatever they perceive comics to be.”

With thanks to Chris Dessent from Creative Concern 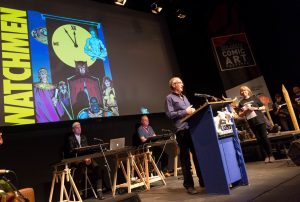