Review: The Ockerbys on Ice, The Dukes, Lancaster

Stephen Longstaffe October 13, 2016 Arts, Theatre Comments Off on Review: The Ockerbys on Ice, The Dukes, Lancaster

The title’s a teaser. Has departing Dukes director Joe Sumsion gone the full Rick Wakeman in his final production and decided that what an everyday story of Northern folk needs is a touch of Las Vegas, Frozen-style?

In fact, The Ockerbys on Ice is an everyday story of Northerners who are offered, via cryogenic freezing, the option of a second chance at life. Dennis Ockerby is terminal, and has approached TED-talking star scientist Dr Taylor Devine to volunteer for his head to be preserved until a cure can be found for his illness. The question is, will healthy wife Viv go through the procedure too so they can be together in the future? Dennis assumes she will; but it turns out that the Ockerbys are on thinner ice than they realise.

Coronation Street writer Debbie Oates’s long-gestated play is an ambitious attempt to bring together the human impact of technological advancement and the kitchen sink. As you might expect with such a writing pedigree, there are some wonderfully funny moments, particularly between Viv and Dennis. There’s poignancy too, as moments of intimacy are overhung by Dennis’s insistence that he will soon voluntarily call time on them, perhaps forever. 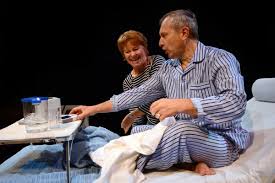 The production takes a while to get going. We need both the characters’ backstory and knowledge of the freezing procedure to understand what’s at stake (hence the TED-talk). It takes some time to understand that the Michael Ockerby we keep seeing is Dennis and Viv’s dead son. The cracks in Lynsey Beauchamp’s Dr Devine are slow in showing through, and until they do the play is a bit stuck in a groove, albeit a tender and entertaining one.

What really makes the evening special is, as the plot kicks in, so the show’s design comes into its own. Sound, lighting and video combine in constant (non-realist) juxtaposition with the human action in front of us. Mark Melville’s stand-out music adds a beautiful, otherworldly undertone to the most everyday of exchanges. Brent Lees’ lighting design intensifies the action, giving us angular takes on faces we’re watching. Alison Heffernan’s design unobtrusively allows a range of visual effects. Smoke curls sinuously from the floor through beams of light while life and death are confronted. Dennis’s near-death panic is the harder to watch because it’s relayed from different angles on a bank of screens surrounding the stage.

In the end, perhaps the title, clever though it is, does the play a disservice. The Dukes has put together a funny, smart, and heartwarming show, full of memorable sounds and images. I hope it finds its audience.

What: The Ockerbys on Ice

Where: The Dukes, Lancaster