One of first foreign films I fell in love with was the 1981 French classic, Diva. Apart from the super cool Richard Bohringer, it starred Wilhelmenia Fernandez as an opera diva. She sang Ebben! Ne Andro Lontana from Catalani’s La Wally. I remember it as if it were yesterday; the sheer beauty of the aria is forever etched on my memory as the first time I paid attention to opera. I also couldn’t believe there was an opera called La Wally.

It has been a long and winding road since then but my interest was tweaked when another French film about a diva arrived on my desk at Northern Soul Towers.

Marguerite was released last year and is directed by Xavier Giannoli. It stars Catherine Frot as a moneyed Parisian socialite, Marguerite Dumont, given to holding opera recitals in her sumptuous house in aid of a war orphan charity (it’s set in 1920).

At the heart of the film is the fact that Marguerite cannot sing, evidenced by her murder of Mozart’s Queen of the Night, a notoriously difficult aria written by the great man for a soprano he detested. You might call Marguerite’s rendering of it The Soprano’s Revenge. It’s so bad that you can almost hear little Amadeus’s bones rattle in anger. In her defence, you might also just hear Eric Morecambe pointing out that she was singing all the right notes but not necessarily in the right order. In fact, Marguerite’s story is not that far from reality in that it is based on the life of American socialite, Florence Foster Jenkins, whose voice was described as “the untrammelled swoop of some great bird”. If you’re brave enough then you can hear her “intentionally ambiguous” recordings online. 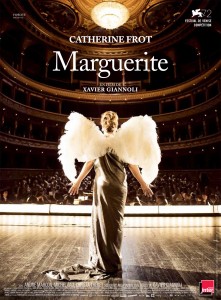 Marguerite is protected from the awful truth by the diligent devotion of her butler, Madelbos (Denis Mpunga), who beautifully photographs her in costume and carefully edits all her bad press. Without the floating body in the pool, there is clearly a reference to Sunset Boulevard but Marguerite doesn’t possess the monstrous ego of a Norma Desmond. Oblivious to her shortcomings, she is sweet-natured, generous and utterly charmante. A quality soon seen by a young writer, Lucien Beamont (Sylvain Dieuaide), who believes that her voice “contains a human truth that rends the heart”.

Starting out with the intention of milking Marguerite of funds, Lucien and his artist friend Kyrill (Aubert Fenoy) convince her to appear at an “artistic event” in Paris, much to the consternation of her long suffering husband, George (Andre Marcon). It turns out to be a Dada performance with Marguerite belting out the Marseillaise while the horrors of World War One are screened on her torso.

A riot ensues and she is arrested. George hopes that she will give up singing and end his embarrassment, but no, she wants to perform in public.

From here the film is a virtual musical parody of Rocky as she trains for the big night, montages and all. As the performance approaches, the strain on Marguerite’s voice is apparent as we build up to the denouement. I’ll stop there. As for the rest, you’ll have to go and see the movie. It’s a handsome film, rich in period detail and subtle characterisation as you would expect of the French (it was nominated for 11 Césars, winning four). It is, in the end, a moving tale of deception and self-deception. A must for karaoke singers everywhere.

Marguerite is currently playing at selected cinemas across the country