“Northerners like bigger portions.” Ain’t that the truth. But when James Martin says so, this truism takes on a whole new resonance.

Having made his name as a TV chef, appearing on such shows as Ready Steady Cook and Saturday Kitchen, Martin is among the top tier of cooks who sell recipe books by the million. My mum has all of them. Now he has opened a new restaurant within the confines of Manchester 235, a casino owned by Caesars Entertainment. Eating in a gambling den is all the rage in that there Vegas but will it work in a city in the North West of England? 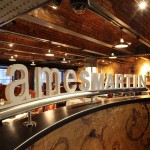 Well, yes, I think it will. Once you make your way up the steps away from the gaming tables and blingy bar, it’s easy to forget that you’re eating in a place better known for black jack and poker. The James Martin Manchester restaurant is surprisingly understated, all exposed brickwork, industrial steel, simply-laid tables and, er, 12 giant metallic antique cockerels which Martin bought from out under the nose of fellow sleb chef Marco Pierre White at a London junk yard.

James Martin Manchester is a nice place to have a meal. Given the food is considerably better than your average restaurant, the prices aren’t too steep and, as Martin promises on his website, it’s modern British cuisine. “There’s no liquid nitrogen here, no dry ice,” said Martin on the night his new venue launched to the press. 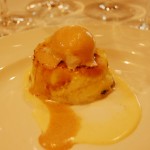 Unlike the other recent restaurant launch in Manchester, this is food without theatre. I’m amenable to both types of meals and Martin didn’t disappoint. From the whisky and vanilla cured salmon served with cucumber ketchup and pickled ginger to the slow roast fillet of pink beef, served alongside a portion of Jacob’s Ladder (a cheaper cut of meat but chewier and tastier than its pricier counterpart) and on a bed of pearl barley risotto, it was all pretty damn good. A particular highlight was the squid ink tapioca, not to mention Martin’s signature dessert – white chocolate and whiskey croissant butter pudding with single malt ice-cream. Nom, nom, nom. My only grievance: less parsley in the main course please.

Given his background, Martin’s reliance on local suppliers and ethical farming came as little surprise. It’s understood that Martin’s interest in cooking began in his mother’s kitchen on the family farm on the Castle Howard estate in North Yorkshire. And it’s presumably due to his mum’s influence that Martin is wedded to what he calls “pure, simple, classic cooking”. Vegetarians might find the ‘meat market’ a step too far (a unique walk-in fridge with the different cuts of meats on show to diners) but be gladdened to learn that a veggie menu is available. Martin’s world record for carrot chopping (in which he peeled and chopped 515g of carrots in one minute) should come in handy. 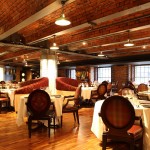