Speaking over the phone from her home in Cornwall, Martha Tilston commences the interview by ushering her two small daughters away. Music is marbled right through Tilston’s family. Her father, Steve Tilston, is himself a renowned folk musician whose recording career began before Martha was born. There’s every chance that her daughters could get in on the act one day, too.

“Oh, my eldest daughter already writes her own little songs every day!” Martha laughs. “I mean, she’s only four and a half, but singing’s just part of her life. I’m not mad on musicals, I’ve got to say, but sometimes it’s like living in a musical, because she’ll answer you back in song. ‘Where are your shoes?’ ‘I don’t knoo-oow / Where my shoooes are.’ Whether it becomes a career or whatever, who knows. But it wouldn’t surprise me.”

After some years spent training to be an actor and performing with bands around the festival circuit, Tilston launched a solo recording career in 2003. Her widely-acclaimed fourth album, Machines of Love and Grace, was released in 2012. Over the years a very appealing depth of field has developed in her music. The warm, folky element is indisputable but there are other influences at work, too: an admiration of classic rock singer-songwriters and a keen ear for striking arrangements and instrumentation.

Parenthood appears to have dovetailed rather nicely with Tilston’s music career. Times have changed since Cyril Connolly wrote his famous maxim that ‘There is no more sombre enemy of good art than the pram in the hall.’ “Wow, I’ve never heard that, “she admits. “Having children was kind of a weird thing. It was the best thing that had ever happened to me but it also completely flipped my world. But actually as soon as I got back on the road, I just found a way of combining the two. When my second daughter was born, they both came on the road touring. She was only about four months old so I was feeding her backstage. So yes, I think the pram in the hall may be a bit distracting for art, but then when you have the odd moment for art, you really treasure it. It’s amazing how creative you can be in half an hour – right, the kids are out, get to the piano! So I think it works well. Just as long as you bring breast-pads to the gigs with you. Because I once had to use Wagamama serviettes and that was absolutely awful.” 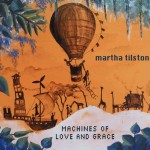 The subject matter of some of Tilston’s recent songs is clearly driven by her perspective as a parent of young children. Survival Guide is a very personal, rather than preachy, reaction to current environmental matters. “I felt like as I became more conscious about the future for my children, issues about the environmental became sort of less… captiony. It became more real. Suddenly it’s like, oh. Oh. Oh! God, I really want my children to have grandchildren and I really want some trees around the place. Oh, it would be great if there wouldn’t be any power stations everywhere…I try not to write about that stuff too much, but I also try not to hold back from it now. Not that I’m massively political, but let’s just go for it.”

Tilston’s work does has the reputation of being political, though. Is that fair, or is it just the case that she’s uncommonly political for someone in her field these days?

“Certainly in the realm of folk music, which I guess I am, throughout hundreds and thousands of years musicians have questioned what deserves to be questioned. But if I’m honest, I think that over the last ten years, as folk music’s become more popular and become much more of a business and there’s more money to be made out of it, understandably there’s a desire to appeal to the masses. So it’s quite tempting to steer way clear of politics because that way you’re not waving the flag and it’s all fine.”

The ‘political’ approach, then, is just honest and heartfelt, rather than conscious. “I’ve never sat down to write a political song. I would say one in five songs I write could be called political. It feels right to do the odd one and not hold it back, I think that’s the thing. And it’s always political with a small ‘p’, because the stuff that I’m concerned about – fracking, say – personally I don’t think it’s a Conservative, or a Labour, or even a Green issue, I just think it’s a ‘everyone wants to stay alive’ issue. It doesn’t feel political, it feels kind of survivalist.”

The success of events such as the Bury Met‘s Homegrown weekender, which Tilston is playing this week, demonstrates just how healthy the UK folk scene is now. But historically it’s a scene of peaks and troughs: after a major resurgence in the 1960s and 70s, the wheel turned and it went underground, until another mainstream revival over the last decade. So might the wheel turn again? For what it’s worth, might folk music be at risk of going out of fashion again?

“Oh, for sure,” Tilston says. “Change is inevitable, and it’s kind of good. Folk music is really just the people’s music, it’s what they identify with. If people really just want to get away from real life and don’t want to ask any questions, they just want to hear beautiful love songs whatever, well, that’ll be the folk music of that time. Maybe it’s just not up to us, what folk becomes. It’s kind of nice to hand it over. In a hundred years maybe my great-grandchildren will be able to tell us.”