From There To Here: a love letter to Manchester

Helen Nugent May 23, 2014 Arts, Northern Soul writes..., TV, We burn witches Comments Off on From There To Here: a love letter to Manchester 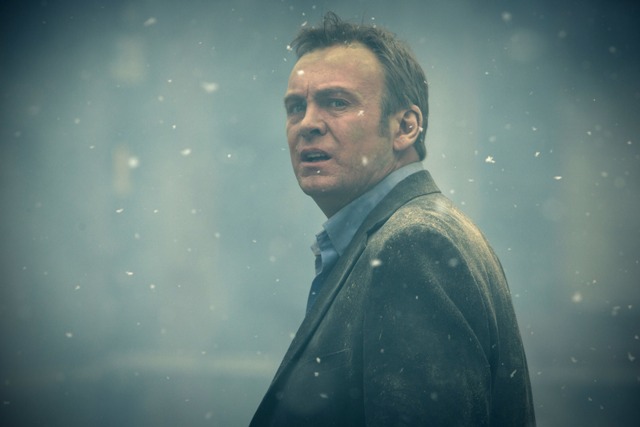 From There to Here is a major new BBC drama. The editor of Northern Soul met the writer Peter Bowker and director James Strong.

The morning of Saturday June 15, 1996 was bright and sunny. Britain was in the grip of Euro ’96 and football fans were eagerly anticipating the afternoon match between England and Scotland. In Manchester, some 80,000 shoppers and workers thronged the city centre, some enjoying the sunshine, others buying cards and presents for Father’s Day.

Shortly before noon, I was sitting at a bus stop in South Manchester waiting for the Number 43. Next to me was my boyfriend. Like him, I worked as an usher at two of the city’s theatres, the Palace and the Opera House. That day I was due to be taking tickets and selling ice creams at the musical Copacabana. The phone rang.

Mark had one of those new-fangled mobile phones – a black brick that could barely fit in his pocket. “Are you alright?” said a worried voice on the other end of line. “Yes mum, I’m fine. I’m at the bus stop. Why?” A pause. “Because the news is saying that a huge bomb has gone off in Manchester.”

And that was it. That was the moment I learnt that my home had been targeted by the Provisional IRA. They had unleashed the largest bomb ever detonated in peacetime in the UK. A mammoth 3,000 lbs of explosives had been packed into a van parked on Corporation Street, right next to Marks & Spencer and the Arndale shopping centre. It went off at 11.17 am, devastating the city centre and destroying a third of Manchester’s retail space. The shockwave was felt up to ten miles away and the 1,000 ft smoke plume dominated the sky. Miraculously – a testament to the efforts of the police and emergency services – no one was killed, although 212 people were injured, mostly by flying glass and debris.

Nearly two decades later and a new three-part BBC drama has recreated the attack and the aftermath, told through the lives of two families over a period of four years. It reunites the actors Philip Glenister and Liz White, last seen together in Life on Mars, and an ensemble cast that includes Bernard Hill, Steven Mackintosh, Saskia Reeves and Daniel Rigby. Mackintosh is a superlative stage and television actor who is known to a legion of kids as Scrooge’s nephew in The Muppet Christmas Carol. Older viewers will remember Hill’s iconic performance as Yosser Hughes (gizza job!) in Alan Bleasdale’s seminal series Boys from the Blackstuff. Meanwhile, Rigby won the 2011 BAFTA for his portrayal of Eric Morecambe in Eric and Ernie, also written by From There To Here‘s author, Peter Bowker.

From There To Here started last night and, if the first episode is anything to go by, promises to be a faithful account of a day that transformed a city, as well as a moving and humorous story about relationships and the rebuilding and reinvention of Manchester. 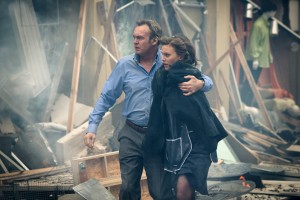 At a recent preview, producers, director, writer and cast members gathered together at the National Football Museum in Manchester to talk about the production. Interest in the event was such that more than 3,500 people applied for a few hundred tickets. Opening proceedings was Burnley-born Peter Salmon, director of BBC North.

“There is lots of great drama from the North of England these days and I think this [From There To Here] is a bit of a gem. It’s made by Kudos who made Broadchurch [the immensely successful ITV crime drama won three BAFTAs earlier this week – From There To Here‘s director, James Strong, was also at the Broadchurch helm] – how did we miss that one? And there’s a really strong cast and production team with some extraordinary credits to their names. It’s designed as a love letter to Manchester.

“The drama begins in June 1996. I remember that day [of the bomb], I was in my back garden with my young son and I remember hearing the explosion. Arguably, it changed this city and this country forever.”

This, it seems, is the crux of From There To Here: the renaissance of Manchester and its subsequent £1.2 billion regneneration, all thanks to the IRA.

Stockport-born author Peter Bowker explained. “Manchester is where I come from and what I know, the spirit of the place and the humour. Because I grew up in the suburbs, I always imagined that something more glamorous was going on in the city…I wanted From There To Here to be about the aftermath of the bomb, in the long term, what it did to people emotionally. I wanted to see the fallout for the city and these families as well.”

Bowker sets the scene for the three-part drama in one of the opening lines which is delivered by Glenister’s character, Danny. “There are three battles that shape our lives: nature versus nurture, free will versus destiny and City versus United.” By his own admission, Bowker is an instinctual writer and at the root of From There To Here are the themes of love, betrayal and obsession. Like many of his scripts (Eric and Ernie, Occupation, Flesh and Blood), From There To Here begins with a man at the heart of a family. 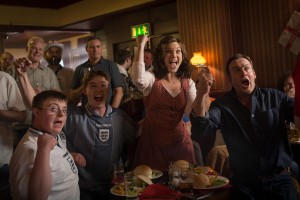 Bowker began writing after his dad, a screen printer, brought home reams of paper from work. He still starts every script with a pen and a piece of paper and also holds the awesome accolade of writing the most complained-about episode of Casualty. A former special needs teacher, his scripts were rejected for 12 years before he received his first professional engagement in 1991. Even after his subsequent success, he feels like every commission will be his last.

“Drama might now be the only truth we have,” Bowker said in a recent BBC documentary. Is he right? Watching From There To Here last night, I think he might be. Bowker has managed to convey hope through despair and humour through tragedy, all the while perfectly encapsulating the Mancunian strength of will and stubbornness in the face of adversity.

“I wanted the detail [of the day of the bomb] to be right but not presume to know the emotions of the people caught up in it,” said Bowker. “Stories emerged so quickly from that day and I also wanted to look at how the city was rebuilt. It’s a starting point to celebrate a rebirth…I hope that after the three episodes that people will take away a sense of resilience and healing of the human spirit…People have said that the bomb was the best thing to happen to Manchester. It was a terrible thing that happened. But as a writer there is an appealing irony that it was a way in which the city got rebuilt. I could create a character like Robbo [played by Mackintosh] who can say the unsayable.” 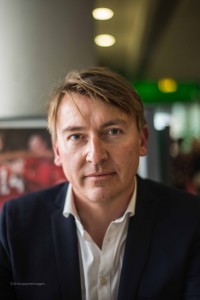 James Strong is the director of From There To Here. He has enjoyed enormous success with Broadchurch and critical acclaim for programmes such as The Great Train Robbery, United and Doctor Who. I caught up with Strong a few days after the screening at the National Football Museum. Was that the first time he’d watched the show with an audience?

“Yes, it was,” he told me. “It was nice to hear people laughing and people enjoying it. It’s a slightly unusual piece about people and character. There are no murders and no genre element. It’s a breath of fresh air. The best dramas are always shot through with humour because that is part of life.

“From There To Here encapsulates a period of great change for the city. It shows the way the city almost shrugged the bomb off quite quickly and turned it into something positive, it was a catalyst for change. One of the characters says ‘from bad shit good shit can occasionally happen’. The bomb is a metaphor for what happens to Daniel, a bomb goes off in his personal life.”

From There To Here is shot through with nods to Manchester’s musical legacy. Across the three episodes we’ll hear, among others, The Smiths, Oasis, Happy Mondays and Joy Division, all curated by DJ Rob Da Bank. There’s new music, too. According to Strong, the choice of Manchester band I Am Kloot “to give an authentic and yet determinedly Mancunian score” was crucial to support and expand the narrative.

Strong said: “The culture and the atmosphere of the city was something we wanted to capture. We wanted it to be really fresh and different and we wanted it to be uniquely Mancunian which is why we worked with I Am Kloot. Although we use period music, we wanted to find a way to make it different and so a North West artist did the soundtrack. And now we’ve got something really interesting.”

He added: “We put a lot of effort into research and the design of the drama. But it was also about capturing the spirit of the period. On a technical level, I hope that the recreation has elements of what really happened on the day. People say we have done a good job there.”

They certainly have. As I watched the opening scenes, a chill ran down my spine. I remember June 15, 1996 like it was yesterday. The point where the bus dropped me and my boyfriend off, unable to drive all the way into a city centre which, just a few hours before, had been teeming with life. The theatre bosses who insisted we turn up at 6pm or forfeit our ten quid wage for the evening shift. The dodging of the police cordon in order to make it to the steps of the Opera House for a show with no cast and no audience. The silent streets bathed in sunshine and laced with menace. The knee-high debris of shattered shops and offices on Cross Street. The lone red pillar box, impervious to the blast that had demolished all around it. The bitter joke that the IRA couldn’t get anything right because the bloody Arndale Centre was still standing. Does From Here To There capture all that? You watch and be the judge.

Were you in Manchester on June 15, 1996? If so, please share your memories with Northern Soul via our Facebook page (www.facebook.com/northernsoul.me.uk ) or via our Twitter feed (https://twitter.com/Northern_Soul_ )

From There To Here is on BBC1 on Thursdays at 9pm