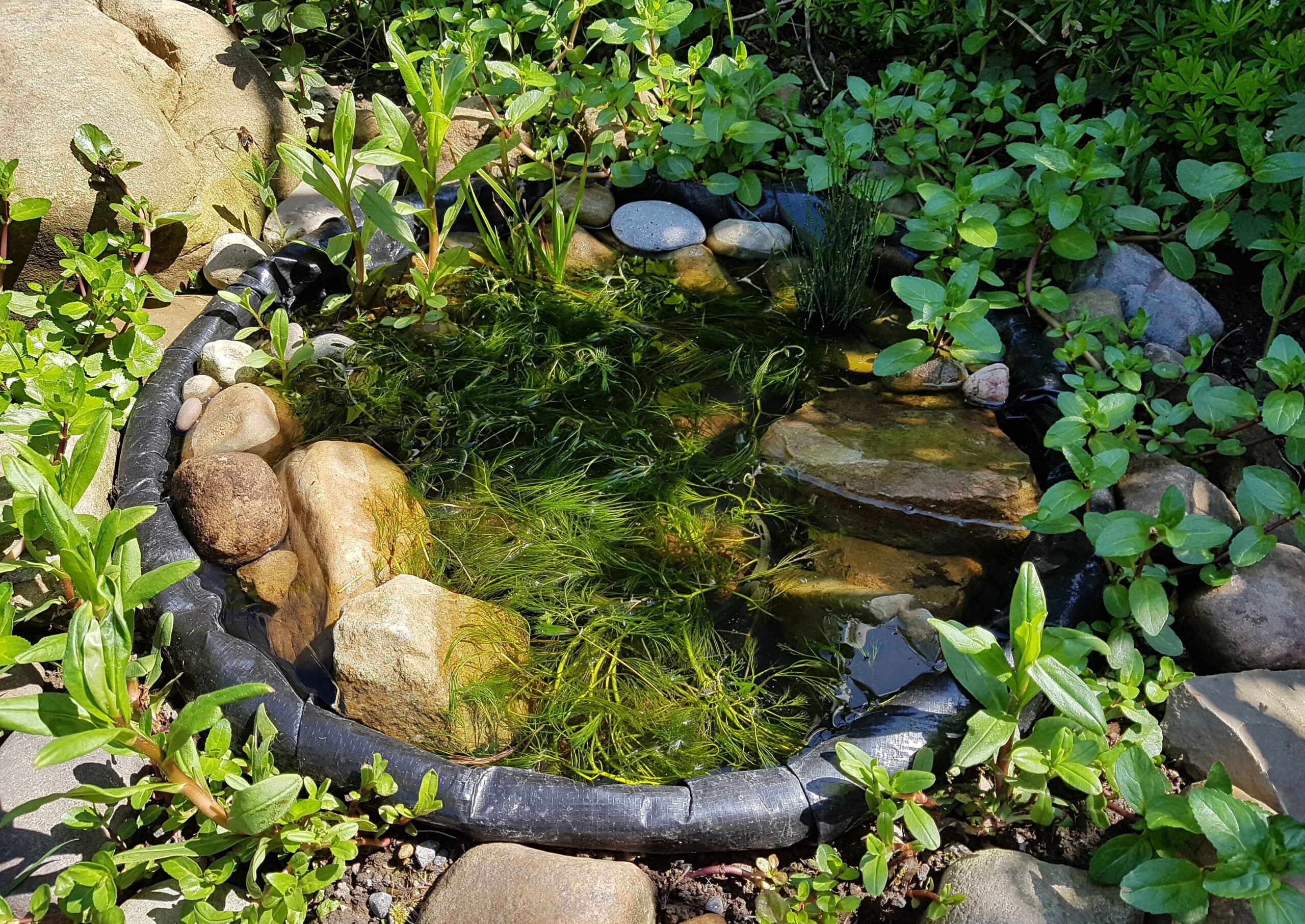 Last year I noticed we had a frog in the front garden. I would often see it at night while I was watering and would say ‘hello’ as it sat looking up at me. From time to time, it would hop about in the daylight in a tame fashion while I weeded, and I was extremely glad to have him around to help keep the slug population down. One day I said to the frog, “Bellamy, we’ve room in the back garden for an additional frog if you’d like to spread the word.”

I realise that I’m a tad barmy but I always speak to animals as though they completely understand me. As it turns out, perhaps they do. No word of a lie but by the end of the week another frog appeared in the back garden. Digby Frogington sat on our garden steps looking at me for some time before disappearing into the undergrowth. Being the proud landlady to at least two frogs, I wanted to provide a habitat for them and hopefully a place for them to produce frogspawn.

Winter came and it was far too wet to be digging holes for a pond. However, in January we had a brief dry, mild spell and decided it was the perfect chance to create a pond for Spring mating. As I’ve mentioned before, we have terrible thick claggy soil and the spot we chose is one of the real problem areas. When we first lifted the concrete, we removed about 25 sackfuls of pure clay, enough to start a pottery. Over the years we’ve dug through this area at least three times, adding well-rotted manure and grit to improve the drainage, but it was still soggy. As my partner dug a hole for the pond, we realised what the root cause had been. About two feet beneath the soil was a rock-hard solid clay surface. God knows how deep it went, but it was like cement and, in the end, the only way we could break through was with a pickaxe.

Before digging I’d bought a large plastic tub to create the pond. If I’d known about the clay beneath, I might have tried puddling instead. This is an ancient way to create a pond whereby a large hole is lined with a thick layer of clay. You can actually buy puddling clay to do this and I wish I’d known earlier as I could have cornered the market with the amount we’ve dug up over the years. Once we’d dug a hole large enough to place the tub in, we began to create a shelf for oxygenating plants. I had read that you don’t need to install a pump to keep the water clean, growing plants such as Water Crowsfoot, Starwort and Hornwort will do this for you, so I bought some online as well as Umbrella Sedge and Water Horsetail to create interest for insects and to hopefully attract dragonflies. 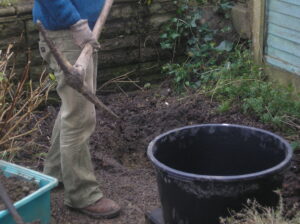 Digging the pond in January

To begin creating our pond shelf we dropped a large rock into the bottom of the sunken tub. We’d found this particular rock during other garden excavation and it weighed a tonne. As my partner pushed the mini boulder into the tub, there was a horrible cracking noise. We looked down and saw a huge split in the bottom. Then it began to rain. Undeterred, I ordered some pond liner and waited for the weather to cheer up.

Two weeks later, there was a gap in the rain. The lining had arrived and so we cut a piece to fit the inside of the broken tub. I’d collected several rocks and planted some water mint and water speedwell between them. I knew there were already other water-loving wild plants under the soil waiting to appear in the Spring as they’d been the only plants to do well in this spot in previous years. We filled the pond with rainwater and placed the oxygenating potted plants on the stone shelves just beneath the surface. Getting the plants to sit at the right depth in the correct spots took some rearranging and I ended up elbow-deep in freezing February rainwater for about an hour. In hindsight, I’d encourage potential pond-makers to place the plants before adding the water unless you are doing it in the middle of Summer. 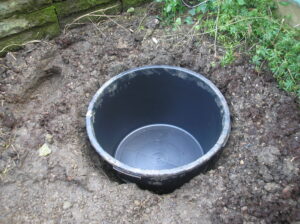 We left it alone. At first, nothing much happened. We had a few flies appear over the water and the plants grew slowly in the short dark days of late Winter and early Spring. I became worried that the water needed some life so I asked a hill-walking neighbour to bring me a jam jar full of wild pond water from one of his walks. My idea was to add living organisms to the pond in the hope it would encourage life. I added this in early April and suddenly life began to buzz and hum around the pond. Birds came to drink and all manner of insects including bees and hoverflies came to sunbathe on the pond rocks.

Some mornings I had to top the water level up and we suspected that something larger was drinking and perhaps bathing in the pond. We are still not sure what, but something was trampling the pond-side plants down and moving the rocks in the water. I saw an owl having a nocturnal bath on somebody’s nature cam and I would love this to be happening here, but it might be a hedgehog or even a rat. Who knows? Either way, there was no sign of the frogs we had worked so hard to please. Mating season came and went and there was no frogspawn forthcoming in our carefully crafted pond. I won’t lie, we were really disappointed after all our hard work but consoled ourselves with the hope that when it became more established it might attract more froggy interest. 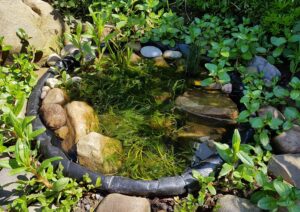 The pond in May

The weeks flew by and there was still no sign of a frog. Nevertheless, so much wildlife visited the pond that all our hard work felt worthwhile. In previous years I’ve had a terrible problem with slugs and found various ways to deal with them. As per usual, I’ve been out faithfully every night to collect the slimy plant wreckers, but they have been strangely absent this year. Last year I would regularly collect more than 40 a night whereas recently the number has been closer to eight. Slowly, it dawned on me that something was eating them and we must have either frogs or perhaps a hedgehog on the premises. Having seen neither, I could only hazard a guess and consequently had started to only remove slugs from plants which were being damaged. But I was becoming increasingly worried I might be accidentally pinching something’s dinner. 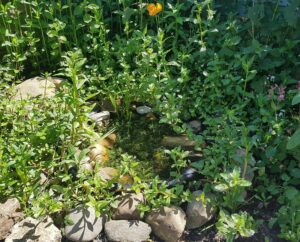 The pond in June

This morning I checked the pond for insects. Despite the stone platforms we’ve created around the edge, we sometimes find bees or other flying things have fallen into the water. I regularly fish them out with a spoon and, luckily, so far there has only been one bee fatality. Today I peered over the water speedwell to see if everything was OK and was met with a pair of beautiful black eyes. I wasn’t sure what I was looking at for a moment but soon realised it was a young frog. I can’t tell you how happy this made me. Edgar Frogington sat partly submerged in the water staring at me for a while and seemed fairly tame. He soon moved onto another rock enjoying the sun and the cool clear water. An hour later he was still there as my neighbours leaned over the fence to catch a glimpse of him. 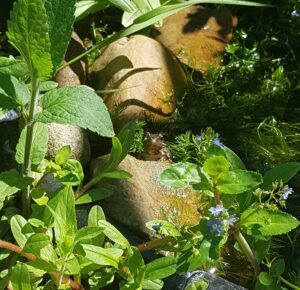 Edgar in the pond

Of all the things I have done to create a nature oasis, making the pond has been without question the most rewarding. It has encouraged so much wildlife and it seems obvious that these wild creatures needed a clean water source. We sit on the patio just a few feet from the pond and have thrushes and blackbirds drinking from it and pulling worms from the nearby soil. There is a constant hum from insects drinking and enjoying the pond, too. The whole experience has been quite magical and if I had known how much it was going to add to the garden, I would have made it twice the size. The digging was hard work but it wasn’t expensive to do and, even if it had been, it would have been worth every penny for the joy it has brought us.

If you do anything in your garden this Summer, create a pond. I guarantee that it will be an incredibly satisfying endeavour which will bring pleasure for years to come. 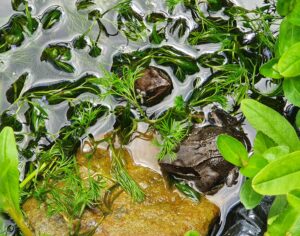 Edgar and Freda in the pond

EDIT: Since writing this article, Edgar has acquired a mate, Freda. Hopefully this will ensure a first-born generation of frogs in the pond.

Water and feed plants regularly during hot, dry spells. Keep an eye on roses, fruit trees and vegetables – this is a prime time for attacks from caterpillars as well as aphids, black fly and saw flies. Catching infestations early can be crucial in an organic garden. Caterpillars will need to be removed by hand but most other pests can be controlled with a spray made from a strong solution of strained chopped garlic water and a pinch of soda crystals (or any soap) applied to affected areas.

Update: The bee hotel featured in April’s article has now become home to some solitary bee larvae. The bees have covered over the tubes where they have laid larvae with mud from the garden. 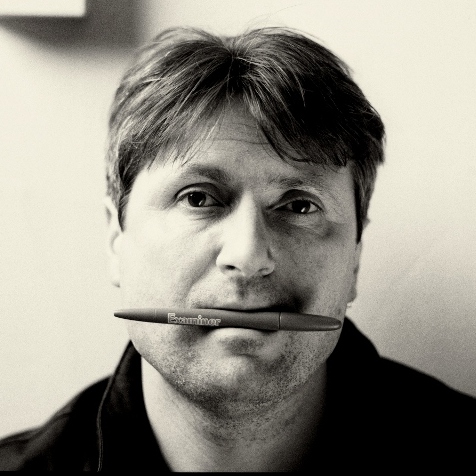 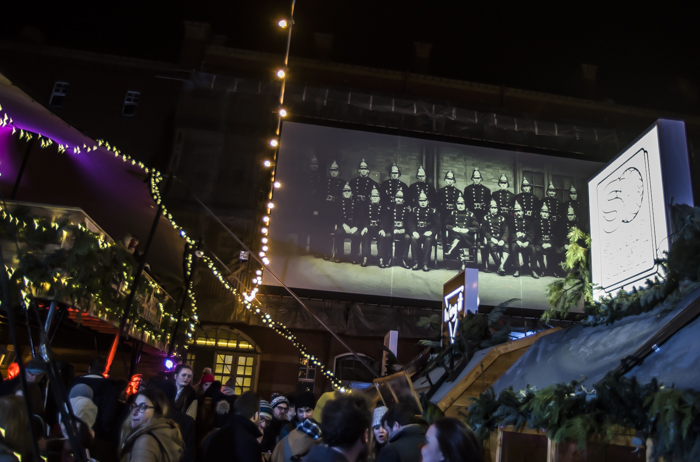 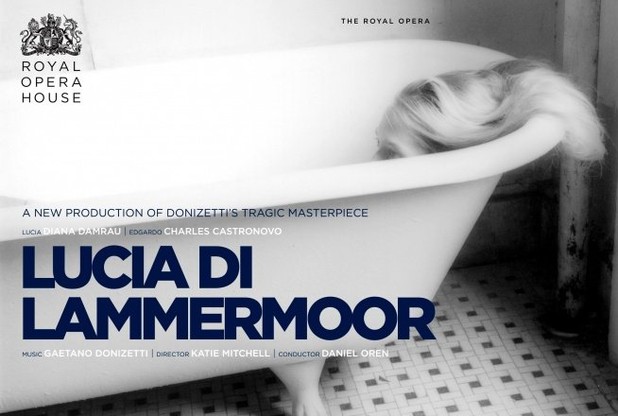 Murder on the Opera Express