As the 400th anniversary of the Bard’s death draws closer (April 23 in case you didn’t know), every theatre in the land is doing its utmost to find a different angle with which to pay homage to the great wordsmith.

Salford’s Lowry Theatre is no exception. At the centre of the celebration is the revival of the late Peter Whelan’s 1996 play, The Herbal Bed: The Secret Life of Shakespeare’s Daughter, which looks behind the scenes of a real life case of adultery. 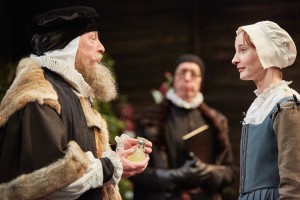 Shakespeare’s Daughter, Susanna (Downton Abbey’s Emma Lowndes), is a conflicted woman, married to a man she respects, Doctor John Hall (Jonathan Guy Lewis). But she’s chasing a man she lusts after, Rafe Smith (Philip Correia). After a lengthy first act spent setting up this story, Dr Hall is eventually called away for the evening leaving the scene set for Susanna and Rafe to succumb to their sinful urges.

‘Best laid plans’ and all that, they are disturbed by the Halls’ maid Hester (Charlotte Wakefield) and the drunk and disgruntled – not to mention recently fired – employee Jack Lane (Matt Whitchurch). Susanna finds herself in all sorts of trouble and off we go.

Well, kind of off we go. This production was most definitely one of light and shade. Whitchurch was an absolute delight, dominating every scene he appeared in as the sozzled, flawed rake we all love to hate. So was Wakefield as poor Hester, torn between saving her eternal soul or her gainful employment as Susanna manipulated her.

But the three main players didn’t fare as well. Lowndes seemed to struggle with the vocabulary and gave the impression she was focusing on getting to the end of each sentence intact rather than giving a great deal of depth to her performance. Correia also seemed to struggle with his character and as two lovers who can’t resist their carnal urges, there was precious little chemistry. Lewis as hapless Hall, the cheated-on husband, appeared to enter the stage with an American accent. This was incredibly confusing until he settled into the so-called Shakespearean accent the others had adopted, which, incidentally, appeared to waver between Irish and Somerset and settled on neither.

Nevertheless, the script was tautly written by Stoke-on-Trent playwright Peter Whelan – although it was frustrating to hear such wonderful lines being wasted. The staging and wardrobe were absolutely wonderful with beautiful sets and props – you could almost feel the summer breeze as you shared the herb garden with these sinners.

In a world of modern Shakespearean interpretations where The Tempest has to be on a space ship, Othello in the First World War, and Romeo and Juliet in Aldi (OK, I made the last one up), it’s refreshing to see a production stay faithful to the period it’s supposed to be set in.

In case you were wondering, Shakespeare himself doesn’t appear. Maybe that’s the problem. If you take away the tenuous Shakespearean link, there isn’t a great deal of story here. As I left, I couldn’t help feeling unfulfilled, which is pretty much how the audience left the characters.