The hotel market in central Manchester is hugely competitive with both 3-star and 5-star offerings pretty much closed shops. The former is dominated by Travelodge, Ibis, Premier Inn and Holiday Inn, offering stag and hen parties what they want, often at inflated prices. The latter has The Lowry and a handful of others, also with rather eye-watering room rates.

But Manchester’s 4* hotels have, for a while, been found lacking. Guests who want that extra level of comfort have been asked, until recently, to pay well over the odds for what amounts to little more than a concierge, a trouser press and a mediocre buffet breakfast. The likes of Hilton and Mercure are tired and dated. Jury’s is unimaginative. And the boutique hotels, while very smart, are simply overpriced for what they offer.

Now, Marriott has entered the market with a newly built venue just two blocks away from the Northern Quarter. The simple, yet design-led AC Hotel offers all the convenience of modern 4* accommodation at the price of a nearby Holiday Inn. 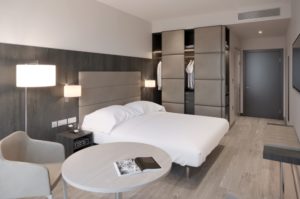 The location might put some hotel guests off. It’s placed right between the eastbound and westbound sections of the city centre’s ring road and to get there on foot means crossing at least one of these. It’s also sandwiched (for now) between a few building sites. But in just a few years, as the Northern Quarter spreads even further north, this area will be just as thriving as the rest of the city centre.

Despite the setting, the soundproofing of this hotel is pretty good. The noise from construction or traffic can barely be heard from the rooms. And the clever design of the bar means guests are almost unaware of the cars zipping by, just a few metres away.

Guests are really not far from the centre of Manchester at all. Northern Soul spent one night there (in November 2018) enjoying the proximity to Mackie Mayor and the eateries of Ancoats. And it’s the perfect location if you’re attending an event at Manchester Arena. 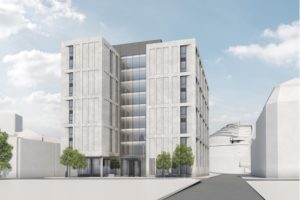 The rooms are spacious and, fitting with the hotel furnishing trend, come with a range of carefully designed lighting options, cosy enough to cuddle up with a book, but also bright enough if you want to work. And speaking of work, the hotel has a spacious lounge with strong Wi-Fi and well-appointed seating – perfect for taking a meeting and cramming in a few emails before your gin and tonic or a few plates of tapas.

After a good night’s sleep, AC Hotel’s breakfast is a mix of classic British staples and a modern European buffet, reminding us of the Spanish derivation of this contemporary brand.

Verdict: Northern Soul recommends this hotel for people who want a room in Manchester with 4* comfort at 3* prices. Just be careful crossing that ring road.

Northern Soul was offered a complimentary one-night stay by AC Hotels for the purposes of this review.