‘We have to shout poetry from the rooftops, revolution is in poetry.’

I am sitting in Manchester’s Malmaison hotel bar, uncharacteristically early and very nervous. I’ve been on the train for two hours in order to slot in a half hour interview before getting back on the next train to Filey. It’s a long journey for a short visit, but that’s how much I want to meet the poet Lemn Sissay.

At Malmaison, the air conditioning is cool, the tables squat, black, trendy. There is lots of red leather and chrome and a happy buzz of conversation. I am frazzled by the heat, my make-up slightly smudged. I have sunk too far back into the trendy seat and, if I have to stand up now, I will be like an old lady trying to get out of a bucket. Then I see Sissay, briefly – he’s taking a phone call and smoking a cigarette outside. I was worried I wouldn’t recognise him, but of all the poets I have ever met, I think Sissay is possibly one of the most recognisable: slim, laid back stance, skinny jeans, dark suit jacket, bright green trainers and the unmistakable afro. He looks impossibly cool, but incredibly approachable at the same time.

We move to a quieter area and he carries my drink for me, but refuses when I offer to buy one for him. He’s already striking me as someone who puts others first, and when I ask how his day has been, his face lights up, shoulders back, big smile. Sissay takes his role as poet very seriously, it’s more than just writing poems for him. He embraces the position that he finds himself in now, this boy from a Lancashire village who ended up in care through no fault of his own and went on to become chancellor of Manchester University.

“I’ve had an incredible day,” he says. “I’ve just spoken to a leadership programme for current and prospective head teachers, it’s my job to inspire them. I don’t think that inspiration is the monopoly of artists and creatives, so through my story and through the things that I have learnt and things that I do, I’m able to show people how I work and some of the lessons I’ve learnt in the hope that they might be useful to them as well.”

I’m here to talk to Sissay about a poem he’s written for the Museum of Science and Industry. The Manchester institution is running an exhibition on graphene, Wonder Materials: Graphene and Beyond, which explores this incredible material. According to the university’s website, graphene is set to take the world by storm: ‘Wonder Materials is the UK’s first major exhibition on graphene and a flagship event of Manchester’s programme as European City of Science 2016. First isolated at the University of Manchester through a process of creative scientific experimentation, graphene is one of the strongest, lightest and most conductive materials in the world.’

It’s a big deal. I’m an ex-scientist and excited to see that science and poetry are collaborating in a celebration of this amazing, skin-thin material. 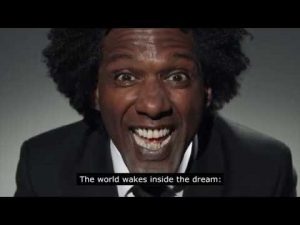 “The poem is called The World Wakes and the central pillar of the poem is the possibilities of graphene to change all of our lives for the better,” Sissay explains. “My job, really, is to investigate what could happen, what great things could occur, what great things could become reality. Look at Star Trek from the 60s. You see them with these little boards that look like iPads, they have no paper on Enterprise. And now we are living in what is becoming a society where there’ll not be paper in the future. It’s really for creative minds in science and the arts to seek out through their imagination what the possibilities could be.

I tell him how impressed I am with the poem. It is beautiful. The language flows through it and the ideas mix and coagulate, reforming constantly into new thoughts; the repetition and rhythm bring a particular kind of momentum, a fission of excitement and optimism. He has accomplished the brief with his usual flare.

Sissay had a difficult childhood, and that’s an understatement. He grew up in care after his adoptive family decided they didn’t want him anymore. His passion for people and poetry could just have easily become bitterness and resentment, but instead he wrote, he spoke, he brought attention to his own experiences in the hope of changing the system. When I read his work I feel that I am reading about a journey, a physical journey, but also a spiritual journey, an exploration and acceptance perhaps of a life that has encompassed a great deal of pain, a life that has created a person who is so open to happiness, joy and passion. In 2015, Sissay became chancellor of Manchester University. Did he feel this was something he’d striven for, a career milestone? Has he reached the top, or is there further to go?

“The chancellorship was an opportunity that was presented to me on my journey,” he reflects. “But once I was asked, I looked at my life and what I had been doing for the past few years and I thought, yes, I can contribute to the betterment of Manchester, I am the right person for this. My role is symbolic and ceremonial, I give out the doctorates to the graduates and I have the opportunity to herald the university as the great place it is, whether that’s in front of the education minister for South Africa, or at the Ofsted inspectors’ conference or the Teach First summer institute, or at a poetry reading in Dubai. It’s wonderful to carry the name of Manchester University with me.”

With his own background as someone who has been in care, and seeing first-hand the struggles that disadvantaged young people face with university, what does he see as his role in helping people into further education?

And how important is a university education in the arts? Is it necessary?

“The important thing is that you have a choice of whether you want to go there or not. The important thing is that you have an equal choice. That someone disadvantaged has the same chance as someone who is from an affluent family, that’s what is important to me. You should have the full experience. The same as any other student. I know as many artists that have been to university as I know artists that haven’t been to university. The idea that university is where learning begins and ends is a false one, we are by nature a learning organism, from birth, we are learning from the start. I feel the experience of university should be a good one, from all points of view. I don’t feel that you have to go to university to be an artist, but it can help.”

We can’t avoid talking about the subject that has been hanging over the country like a mouldy blanket: Brexit. I want to know his opinions, whether he’s been affected by it, and how poetry speaks about anger, politics, pain.

Sissay says: “This is my personal opinion, not my opinion as chancellor. I wanted us to stay in the EU. I think I wanted us to stay in because although we may get to the same point as those that wanted to leave, I think the spirit of people who want to stay in is much stronger than those that want out. It’s that simple on many levels. Everything’s been influenced by the extreme right, politics have been influenced by the extreme right, the Conservatives have and so have Labour. Labour is now more centre, so the whole axis has changed because of Farage. Farage began 17 years ago and he knew what he was doing then. What people don’t seem to realise, and they are trying to undo this narrative, they’re trying to deny it, is that immigration is central to the psyche of British people, and until we admit that, we can’t really go forward. I think that over the next few months there will be denial, lots of people will deny that it was about immigration and that is really sad because although there is a lot of distress at the moment in me and in society in general regarding the referendum, this is an opportunity to galvanise and think about ourselves, what we think, our self-image and how we think about the world and what the world sees in us. It’s a great way to marshal ourselves, ask questions of ourselves.”

And does poetry have a voice in politics?

“Poetry is the heart of revolution, because revolution is at the heart of the poet. We will articulate this madness in the most truthful way, non-politically/totally politically, non-personal/totally personal. We have to shout poetry from the roof-tops, revolution is in poetry. The moment you write a poem, it changes the world, because it’s not the same as it was before you wrote it. The great thing about the referendum is that we are giving voice to our feelings, and that’s what poetry does ultimately, it gives voice to the unspoken.”

Sissay seems tired, his phone pinging constantly. While I am getting a cheeky selfie with him, an invitation to appear on breakfast TV pops up. He shakes his head, seemingly amused by where his life has taken him. So, what’s next?

“This is the first article I’ve talked about this but I’m bringing out a new and selected poems in October. It’s called Gold from the Stone. I’ve been commissioned to do a poem for the Battle of the Somme for the Heaton Park memorial, and I have a Radio 4 series which I am recording in August, a couple of days presenting the Proms at the Royal Albert Hall, and I’m going to America to do some events in August, then back to Ethiopia, and…yeah. I do love it. Sometimes I’m tired, but actually, that’s my job, to do what I do the best as I can do it. I’m not as busy as a single mother and I have less to use, do you know what I mean? I look at it in context and I think…yeah.”

And thus ends our interview. He walks me into the street and directs me towards the train station. I am carried along by his passion, thinking about poetry as a tool of revolution, a voice for the voiceless. I spend the train journey back drinking warm white wine in a little plastic cup and working on a draft of a poem, Sissay’s advice still resonating: “Never think that the writing world is bigger than the poem you are writing.”

Wonder Materials: Graphene and Beyond is open now and runs until June 2017 at the Museum of Science and Industry, Manchester. To read Northern Soul’s review, click here

To listen to Lemn Sissay’s The World Wakes, click here

A new addition for the wall at Northern Soul Towers. pic.twitter.com/TXByiCZe8x