It is testament to the longevity and all-round brilliance of Lego that, after a day spent in a pricey Lego wonderland, a four-year-old’s best memory is “playing with the Lego”.

As a PANK (Professional Aunt, No Kids), one of my favourite jobs is spending time with my niece. I say ‘job’ but it’s no burden. Among the various elements that make up my life – work, life admin, generally staying alive – spending time with her is, hands down, the best part of my week. And what is it about children and their ability to infuse your life with joy and laughter? Take this typical conversation I had with the young ‘un last week. It was mid-afternoon and one of those days where I rolled out of bed in my PJs, started work immediately and didn’t stop until she arrived. 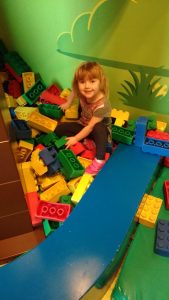 She had a point. Thankfully I was suited and booted when I took her to Legoland at Manchester’s Trafford Centre. I’ll admit that the prospect of spending a day with a gaggle of kids high on slushies and Lego wasn’t an enticing one (there’s a reason I’m a PANK) but I had my fingers crossed it would be Scout’s cup of tea.

There’s a lot going on at Legoland. A quick glance at the website prior to our visit revealed a dazzling array of activities, from Lego Duplo farm, Lego factory tour and Lego forest pursuit to Lego laser training camp, Lego fire academy and Lego construction site…I could go on. One thing was clear: I would need caffeine to survive this. Industrial amounts of caffeine.

Armed with enough diet coke to keep me awake until Christmas, reader, I went to Legoland.

Our first Legoland experience? Queuing. To be fair to the place, it was a school holiday and the venue was fit to bursting. With that in mind, the queue times weren’t that bad. I’ve waited longer to buy nachos at the cinema. Then it began. From the Legoland factory and the laser ride (a highlight for me but a bit overwhelming for a four-year-old) to a Lake District made of lego and a soft play area, it was all top notch. Well, except for the Lego karaoke. If I want to hear a five-year-old murdering Let It Go I’ll visit the local supermarket on a Saturday morning.

Legoland would do well to expand its canteen area (manic and overcrowded doesn’t begin to sum it up) but otherwise they’ve pretty much got it spot on. Beware of the cost though: there’s a myriad of options and you’d be advised to book online otherwise you won’t see much change out of a £50 note for you and a child. 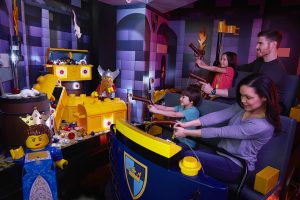 My favourite Leogland experience? The shop. I snapped up a fabulous and entirely pointless Lego Wonder Woman keyring. Scout’s best bit? Jumping into a vat of Lego and making stuff. As we left (me frazzled and desperate for a G&T, her barely ruffled and still full of energy), her parting words were: “Aunty Helen, can we come to Legoland again?”. To which I replied: “Of course darling, your Mummy will bring you.” 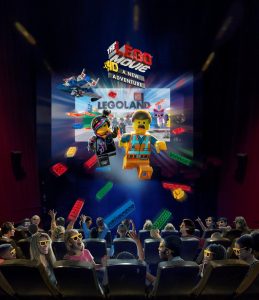