In an unassuming Manchester suburb there’s a living room with a piece of furniture you’re unlikely to find anywhere else. It’s a lamp made from a Greenham Common section of fencing. It belongs to lifelong equality activist and peace campaigner, Betty Tebbs.

Even a cursory glance at this 98-year-old’s CV is enough to make you wonder what on earth you’ve been doing with your time. From successfully leading women in the first ever strike for equal pay to marching on peace demonstrations across Eastern Europe, this Bury-born woman is a formidable force. Kettled at the poll tax riots, she was most recently arrested in 2007 at the Faslane nuclear naval base near Glasgow, lying in the road fastened to fellow protesters. At 89. I’ll be glad to still be breathing at that age, never mind battling against the Trident nuclear programme.

But Tebbs’s life hasn’t been easy. Along the way she’s suffered unimaginable heartache, worked tirelessly with battered women and fought tooth and nail to improve workers’ rights. But it all began at an East Lancashire paper mill in 1932 when Tebbs was just 14-years-old.

When she received her first pay packet. Tebbs couldn’t understand why the boy working next to her received two shillings more for the same work. As a result, she joined the union. By the time she left nearly 20 years later, Tebbs and her fellow female workers were the best paid paper mill women in the country. Thus began her lifelong commitment to trade union activism.

She remembers another momentous event some years later.

“I started work again at the mill after my son was born,” she recalls. “The women with children worked different hours to help with childcare. Then I remember bringing the women out on strike because of a time and motion study that was implemented that left the women with a different method of working and reduced wages. We went on strike  and the owner then came to speak to about 120 women. He asked if they were refusing to work and the women said yes. The women returned to work the following day under the old system.”

Tebbs adds: “Soon after this the firm sacked the man who collected the union subs. At a minute’s notice. I went to see the branch official who said the union would back a strike. Another woman had tried to bring out the workers without success, then I went through all the rooms where the women worked to talk to them. I was escorted out but on my way out I shouted to each room that I would be outside at 11 o’clock if they would come out.

“At just gone 11 the door opened and they all came out and went home. We were on strike for two weeks. The union paid strike pay but not all the women were in the union at that time. But they all joined and were paid the strike pay. Then we were told we could go back to work but had to apply for our jobs individually. So we said no, we must all go back together. We were out for another three days and then all returned to work together. I then was elected the Mother of the Chapel and put forward all the improvements the women wanted. 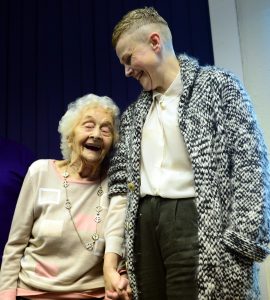 “I then went to a conference in Cyprus on behalf of the union where I heard a woman speak about ‘equal pay for work of equal value’, and I knew that was the key. I worked there for 17 years.”

During those years at the mill Tebbs had to overcome a number of personal challenges as well as professional ones. At 16 she met her first husband, Ernie. She was still in her 20s – and had given birth to a daughter, Pat – when Ernie, who was away in the infantry during the Second World War, was killed in action. He only met his little girl once.

I ask Tebbs what galvanised her into becoming a peace campaigner.

“My first husband Ernie worked in reserved occupation and wasn’t called up. But he decided that facism had to be fought so he volunteered. He died not long after D-Day, in France. I was working on munitions then, 12-hour days and 12-hour nights, as a crane driver but earning more money than in the paper mill. But then found I was pregnant and eventually had to move to other work.

“Then I met my second husband Len who talked about a system of society where there was no need for war. He educated me politically.”

A soldier when she met him in Devon in 1945, Len Tebbs was a committed socialist. After marrying the couple went on to have a son, Glyn. Sadly, Len died at 61, shortly before the pair were about to retire. However, years earlier Tebbs had joined the Labour Party, an organisation she rejoined recently in order to vote for Jeremy Corbyn.

It’s been a turbulent week in politics. I ask her what she makes of the embattled Labour leader. “He gave us hope, I support him but am disappointed at his position on the European Union.” 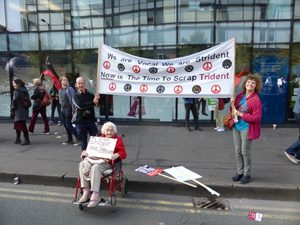 Nevertheless, Tebbs hasn’t abandoned her political beliefs. She still attends protests, most often using her mobility scooter “with the help of friends”. She adds: “I still write letters to the press, MPs and the unions and I like talking to young people.”

Tebbs’s continued activism in her 90s echoes her life’s work. Among her many achievements – and groundbreaking actions – is her role as chair of the National Assembly of Women and as a leading member of the Women’s International Democratic Federation. On her 70th birthday she requested that instead of presents, her friends and family make donations towards helping equip a clinic in Palestine for women.

Despite her love and respect for people all over the world, Tebbs remains wedded to her beloved North of England. “I never wanted to move away. The North is where I could be politically and industrially active.”

But the ongoing disparities in male and female pay, and gender inequality at every level of business, is still at the forefront of her mind.

“There has been progress, but it’s far from universal. After more than 40 years of legislation there is still a lot to be done. We want a more equal, caring society, and that means socialism.”

As I reluctantly draw the conversation to a close, I finish by asking what, out of everything she’s done, Betty Tebbs is most proud of.

“The work I’ve done for peace and women,” she replies. “Peace and socialism are two sides of the same coin, we can’t have one without the other. The bottom line is, it’s up to us.” 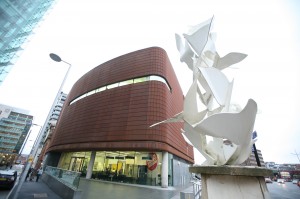 Betty Tebbs is one of Manchester’s People’s History Museum‘s 100 Radical Heroes, the museum’s fundraising campaign that recognises the inspiring men and women who feature in the story of democracy, believed in ideas worth fighting for and made life better for ordinary working people. Betty can still be sponsored for £3,000 for three years to support the museum: http://www.phm.org.uk/support-us/sponsors/