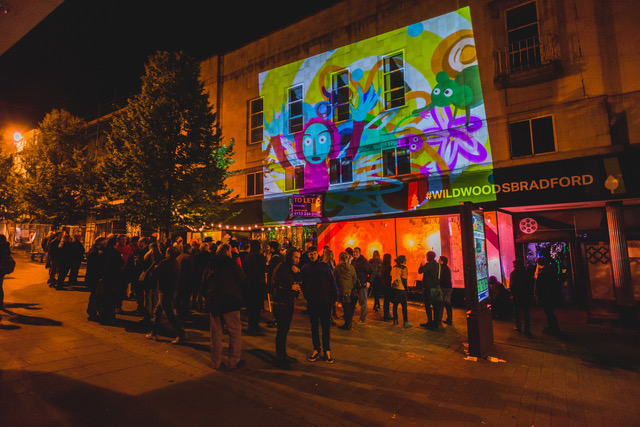 Sitting upstairs at the Forks cafe in front of the enormous window overlooking Bradford’s up-and-coming North Parade high street, Rosie Freeman is holding forth about the many attractions of her newly adopted city. The 31-year-old is co-director of The Brick Box, the highly regarded arts organisation and community interest company that last year relocated from London to Bradford.

Freeman and her business partner Eleanor Barrett are winning plaudits for their live art experiences that transform neglected spaces and stimulate creative and economic activity. These include The Wild Woods, which converted an empty Marks & Spencer store into wooded glades and old folklore to be enjoyed by people of all ages, and Electric Fireside, which combined interactive light installations with authentic storytelling. Their next event, The Wild Woods in Bloom, take place on April 1 and April 15 from 4pm in Darley Street.

“We see Bradford as a really good place to come and do things,” says Freeman. “I’ve been living in London for 11 years and there is no space there. There is the opportunity to do things due to physical space and the fact it is much cheaper. I find it creatively far more engaging and inspiring to be in a place where you can see opportunity. There are some quite jarring things about the city, like the poverty in some areas and dilapidated buildings among the gracious stone architecture, but because you have the opportunity and the spaces, you have fertile voids and I think that is where the stuff comes about. Like great pop music comes about from having a hard time.

“I think a lot of the challenges Bradford faces makes it streets ahead of the rest of the country. What do you do with empty shops when your high street is suffering? What do you do with lots of different cultures who are all living together? How do you create positive spaces where people can meet and understand each other? All sorts of those things are present in Bradford and there is a long history of people doing exciting and quite radical things. There is a history of activity. There is a DIY culture. People I know like teachers can chip in with their mates to have a studio in a mill and they can have a band and it’s not like they are trying to be famous; it’s what they do; they have got creative expression. And it is fun. And they have time to do it. And I don’t know anyone like that in London. 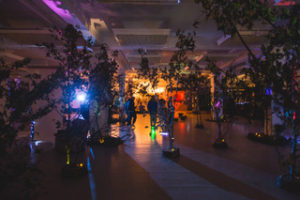 “I absolutely love London and I still go back regularly, but I felt like I consumed a lot of culture down there and up here I feel like I create it a lot more. It is that opportunity to feel like you are active and can have a more significant impact is the thing that is really exciting.” 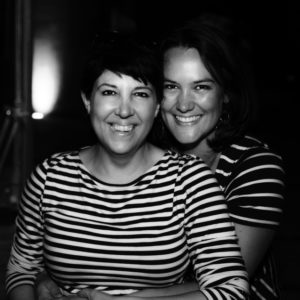 Things very nearly didn’t turn out this way. In 2011, the day after she quit her job at a global publishing house to concentrate full time on Brick Box, Freeman was seriously injured in a road accident. She was cycling across Tooting Common in South London when she was hit by a car.

“I got what is technically known as T-boned,” she recalls. The severity of injuries meant she was no longer able to live independently. There was no choice but to return to her parents on the Isle of Wight.

The company had just completed its first arts project, helping to reverse the fortunes of Brixton market. But instead of launching into the next commission, Freeman spent the next six months convalescing at her family home. Sometimes in life you need a jolting experience, she reflects.

Freeman is an adventurous spirit. After reading Medieval and Old English at Nottingham University, she went to South America and lived in the jungles of south Mexico with the Zapatista indigenous movement and helped to make a documentary about the Venezuelan president Hugo Chavez. She also did some political work in Colombia.

On her return, she found a job at Penguin Books, working with bibliographic data. She was excited to be involved with the publishing process, but the urge to be creative was unfulfilled. Freeman started volunteering at night at a performance space called Shunt. Attendees were treated to an immersive experience in the tunnels and corridors beneath London Bridge station. One week, they were processed as detainees in a mock-up of Guantanamo Bay. It was where she met Barrett, who would become her business partner.

The restless soul upped to India to find herself. Her employer Penguin found a position for her in Delhi. She loved the city of 18 million people, the melting pot of cultures, the ancient Muslim, Afghan and Tibetan quarters, the mangos and coriander and the travelling, which took her to the Himalayas, a Buddhist temple and the backwaters of Kerala. A year later, Freeman was back in London, working on digital strategy for Pearson, the parent company of Penguin Books, a role which also took her to New York. “I guess because I liked stories I ended up in a place, doing something which I could do, with a good salary and things like that, but it didn’t tick all of the boxes. It wasn’t creative enough.”

Her friend Barrett, meanwhile, had returned to her home city of Bradford and was running the Bradford Playhouse, a small theatre in Little Germany, and attracting attention for exciting and occasionally risky shows. Freeman’s first visit to the city was for a show featuring Rita Marcarlo, a Portuguese performance artist who attempted to induce an epileptic fit on stage.

“I remember coming here and thinking this place is mad, this place is like the Wild West. People were really friendly and different. There were people of all ages, all skin colours and all backgrounds and it just felt like nothing I’d been able to find in London. Life in London is more silo-ed and more specific. I felt instantly warm towards the city.” 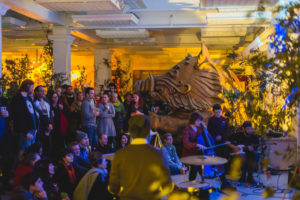 Barrett launched The Brick Box in 2010 and Freeman joined as co-director shortly after. Their aim is to reimagine neglected space and bring about a regeneration of spirit as well as place. They delivered projects in the London districts of Lambeth, Wandsworth, Newham and Thamesmead, often working with property developers, local authorities and housing associations.

The Arts Council awarded funding to The Brick Box to develop a project called Electric Fireside in Bradford and London. The anarchic mix of storytelling and audience engagement was well received and led to a commission for Durham Lumiere, the UK’s largest light festival, and some longer-term projects with former mining communities in County Durham, including suicide prevention work across the age groups.

The Brick Box found its niche in amplifying the voices of the marginalised, people who are ordinarily excluded from the art world.

“Instead of it being Rosie and Eleanor’s theatre show, it was the Wingate ex-mining community hosting the Electric Fireside at Durham Lumiere. We don’t have the art. It doesn’t belong to some people and not others, which is why we have a problem with some of the stuff that happens in the art world. I guess what a lot of our work is doing is creating a space, or an atmosphere, which is creative, which is welcoming to people.”

This approach was applied to The Wild Woods, M&S having relocated to the new Broadway shopping centre, and which is being reprised this March and April. The directors found inspiration in the folk story of the Bradford boar, a legendary animal which terrorised the people of the city in the 14th century and features on the district’s civic coat of arms. The woods reference came from Darley, a word derived from ‘deer glade’. Once filled with fashion, the shop floor of the old M&S was dominated by an enormous golden boar, formerly the pride of a carnival float.

For every £1 of public funding, the event generated another £4 for the local economy. The average visitor spend on food, drink and travel at The Wild Woods was £30. People travelled from far afield to attend, including from the ‘posher’ BD districts of Shipley, Saltaire and Baildon. In their feedback, some visitors would say they hadn’t been to Bradford city centre for years, but the event had really changed their perceptions. 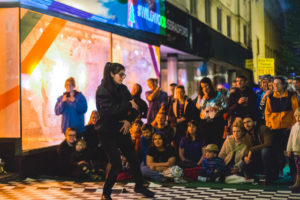 “As soon as you start to show people that ‘it doesn’t have to be like that, it can be like this’, they start to change their behaviour and their thinking and their emotional connection to a place and that is how change happens, isn’t it? Because you might take a unit and start a business in Bradford based on confidence. It starts from an internal space.”

Now, at nearly seven-years-old, The Brick Box has learned that the success of its projects can lead to rents rising, one of the first signs of gentrification. With that gentrification has come a kind of social cleansing as poorer people can no longer afford to live in an area, priced out as hot money comes in search of a return. Mindful of these wider effects, Freeman and Barrett are considering property ownership as a way of continuing their mission, of providing people with “something to pique their jaded palettes”.

“Plenty of people I know down in London are saying, ‘where did all the edge go? Where did the fun go?”

The answer, it seems, is Bradford.

Wild Woods in Bloom will take place on April 1 and April 15, 2017 from 4pm in Darley Street, Bradford