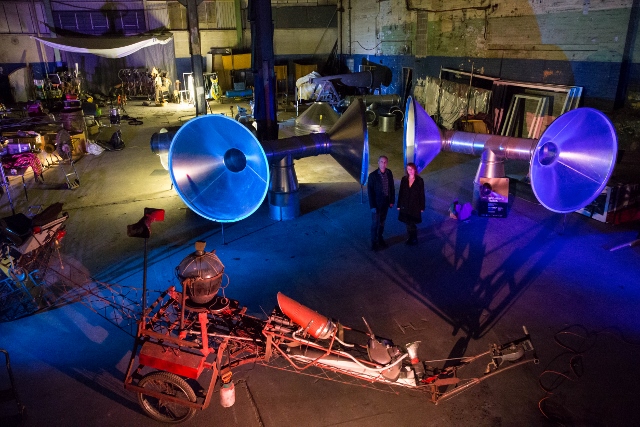 IOU Theatre has been producing work for almost four decades. So, what is the secret to the Halifax-based company’s longevity?

“It’s a combination of many things,” says artistic director David Wheeler. “We’ve always been able to adapt to whatever’s going on because we’ve not set ourselves up as a company that simply tours in theatres, we’ve used lots of different locations, not necessarily traditional. We try and find different ways for the audience to engage with what we’re doing. So we can adapt what were doing to suit funding opportunities.

“It’s never felt as if it’s the same from one year to the next. We have a basic approach to making the work but every year it’s like starting again. We don’t have a theory or manifesto that we work to, it’s just working out what is the right thing to do, it’s just evolved. It’s a company that works more like an individual artist that evolves from one interest to the next.” 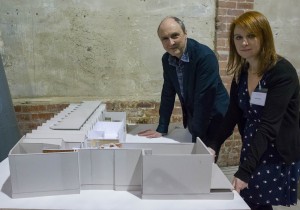 IOU has a multi-disciplined approach, incorporating sound, video, sculptural installation, site specific performance, interactive digital and virtual worlds. “It’s much more interesting [than a traditional theatrical approach] to be able to feel that we can respond to the people we are working with at any given time and the particular skills that they are bringing to the company,” explains Wheeler.

“It seems as if we can use any art form we like in response to the ideas we may be having. So it doesn’t seem inappropriate to work in any form as it comes from one starting point really and we just use the appropriate tool for the job. The people that commission us have got used to the fact that we work in an unpredictable or surprising way because we can use different forms but still be true to who we are.”

Similarly, rather than go it alone, IOU has always been about collaboration, be it with technicians, poets, musicians, artists, makers or performers. “Again it allows us so many more possibilities with new people coming into the organisation and bringing a whole new approach and new ideas. And it’s always exciting to work with people from a different path and try and respond to that.”

A good example of this approach can be seen in the company’s current project Fulcrum which comes to Z-Arts in Manchester in June.

“Fulcrum is the result of a relationship with The Junction at Goole where the director there invited us to come in and take over the space at the arts centre and do something new and interesting. It is an installation piece that uses robotics and miniature scenes. We made our own robotic arm and robotic systems to make a story following through these scenes. So in one room we had a sculptural environment of little scenes where the camera was following a story and that was projected next door. 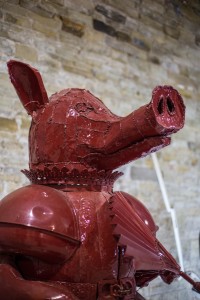 “So the visitor could see the scenes in miniature and then see them blown up large in an animation story. We also try and engage our audience or visitors in different ways so there have been workshops showing how we made the robotic system at a basic level. People find it very good to see how the machinery of what we make works. It’s a way into what we’re doing and to reveal the process which makes it more accessible. People really appreciate being guided that way and we like to do that as much as we can.”

Although IOU has frequently used new and innovative technology, the team is keen to avoid this becoming the subject of the work.

”It’s about the emotions and the narrative not just being amazed at the technology because that’s a very short-lived response. So we try and hide the well-centre of the technology and make the work as rich and multi-layered as possible.”

Wheeler really warms up when I mention the divide between science and art. “That’s another interesting question. The approach of science and art is actually very similar anyway. It is an exploratory approach which have resonances with each other. In the Antarctic project I was working with a whole set of scientists responding to natural phenomenon. We don’t want the work to be theme-based, so we don’t tell the viewer that it’s about climate change or ecology or whatever.”

For those familiar with IOU, the experience is associated with its brilliant street theatre. “That was something that some 40 years ago we wanted to do [get out of gallery or theatrical spaces and into street or unusual spaces]. It wasn’t as usual then as it is now. So we took what we make to where an audience might not necessarily expect to see it, but it’s always rewarding to see people’s response to it.”

IOU’s latest development is being created in a brand new space at the company’s Dean Clough home venue. Once the site of the world’s largest carpet factory, this 20-acre plot is now a thriving, privately-owned business community of more than 4,000 people in Halifax.

Wheeler says: “We’re coming up to 40 years and it’s time for, in a sense, a new beginning as well. We’ve been lucky enough to be at Dean Clough since 1984 and that’s really helped us survive as well, that they’ve given us the theatre spaces. They’ve now offered us another space which we’ve got funding to make changes to. It’s a chance to bring all that we do together, the making, the administration and exhibition. 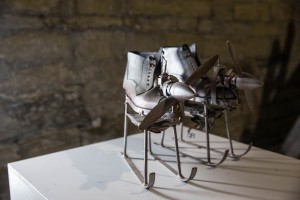 “It’ll make it a lot more publicly accessible space and organisation. So we will be able to do more workshops at the same time as we produce our work. So we can develop a structure around what students want to do. It comes at a time when funding is going to change as well as technology. We’re known for making interesting objects in three dimensions but it’s that cross-over between the real world and virtual reality. So we’re working on the cross-over between the three-dimensional object that you can hold in your hand and the virtual world where everything is built virtually. We’ve always enjoyed taking audiences into unusual settings but this will be the theme for the future of IOU.”

I wonder if Wheeler is worried by the current Arts Council England (ACE) funding changes, seen by some as a step away from encouraging experimentation and innovation and moving more towards populism and accessibility.

“We’ve been around a long time and we’ve been through a lot of versions of ACE and we respond to things as they happen. I’ve no idea what the future is going to be but hopefully we will adapt to it in a way that doesn’t compromise what we do. It’s an interesting point that we started in 1976, the same year as Apple and Microsoft, and it’s interesting to think how much the world has changed in the last 40 years.”

Over those four decades, IOU has produced a huge body of work. Does Wheeler have a particular favourite production? “IOU has been through so many different phases so it would be impossible to say which is an overall favourite. Each period has been very special. The personal moments for me are the tiniest little things that you remember, either in performance or the audience response that you never quite expected.

“It’s the idea that you as a viewer or spectator member bring all your own history to looking at something. So it’s being able to invent a response that is really personal to them, it’s open to interpretation. I like it when people tell us what they think it was about, it’s not about telling one particular story.”

IOU Theatre’s Fulcrum is at Z-Arts, Manchester from June 22- 27, 2015. See http://www.ioutheatre.org/ for details of this and other current projects.