Marissa Burgess January 3, 2018 Comedy Comments Off on What’s on in January: Comedy in Manchester

Skint? Doing dry January? Still trying to figure out what to do with the fright of a jumper your grannie/uncle/the au pair/the kids’ lollipop lady bought you for Christmas? All those horrors are solved here – some comedy is very cheap/free, they sell lemonade at clubs too, no one gives a shit what you’re wearing – so check out this lot in this chilly first month of 2018.

Over at the city’s two dedicated comedy venues, The Comedy Store and the Frog and Bucket it’s funny business as usual.

Following the New Year shenanigans, the pro stand up weekend shows start back on Friday 5 and newcomer gong night Beat the Frog on Mon 8 and every weekend and Monday afterwards. Then rounding off the month on Sun 28 is all female comedy night Laughing Cows hosted by, as ever, the irrepressible Kerry Leigh.

Meanwhile over at the Store, the club kicks off its weekly stand up nights 2018 on Thu 4, then there’s amateur gong night King Gong on Sun 7 with Ian Coppinger keeping order. Sun 14 & 28 see comedians trying out New Stuff with Toby Hadoke at the helm and on Sun 21 seasoned Manc comic Alex Boardman picks his favourite New Comedians.

Kicking off the year with some top comedy with the beguiling storyteller Tom Wrigglesworth, top Scottish comic Gary Little and the deliciously frank Jenny Collier. Our own Justin Moorhouse comperes.

Tom Wrigglesworth and Gary Little do the doubling up with Brian Bell supporting and Alun Cochrane compering in Didsbury and Hannah Platt providing the middle section and Justin Moorhouse hosting in Heaton Moor.

Well, not quite every Tuesday this month but XS is back on Jan 9 with former We Are Klang member and one of the writers of Russell Howard’s Good News, Steve Hall. Subsequent weeks maintain the quality with acclaimed Kiwi Rose Matafeo on Tues 16, former Manchester Uni student turned telly star Joe Lycett on Tue 23 and the writer and actor Jessica Fostekew on Tues 30.

Not sure at time of committing to going live when this gig would be back, but it’ll probably be on Wed 10. But it could be the week before. Check the Facebook page for details. See below for a bit of background blurb too (Worst Comedy Night in Salford).

Trapdoor returns with two outings for the incredible John Robertson’s The Dark Room interactive gameshow hosted by the shouty man himself at The Old Monkey on Wed 10 and Wed 17 at Old Pint Pot. Then the following week on Wed 24, the critically raved about Geordie Lauren Pattinson takes to the stage at The Old Monkey.

Need we say anymore? That’s CHRIS ROCK, yeah? Anyway, the massive US comic opens his first UK tour in ten years at our very own Arena.

The GT guys showcase some of their favourite new comics with The Magnificent Seven Vol 4. Jessica Fostekew takes the reins to guide them through and the wonderfully offbeat Tom Ward headlines. 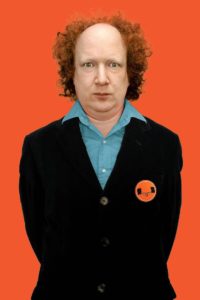 Beginning life many turns around the sun ago as The Worst Comedy Night in Manchester and where Alan Carr performed his first ever gig, this is one of two incarnations for that original night morphing into Comedy Balloon at the Ape and Apple (run by Jason Cooke) as well as this gig run by original promoter Dave Turquoise (probably not his real name). At both gigs you’ll never be quite sure what you’re going to see, or where they’ll be in a few years’ time, and that’s the point of going. Two, true heroes of the comedy scene.

Justin Moorhouse and Alun Cochrane invite a mate to join them to test out new material. Get a glimpse into the workings of stand up in this informal evening. All proceeds to The Lowry’s Christmas Appeal.

Mr Tony is in the house. Nonsensical, joyful and inexplicably funny, a true comedy legend.

Local talent Reece has been impressing many around the world (well at least in Edinburgh and at the Aussie festivals). Here he is with his second solo show Everlong. Catch him before he’s all over the bleeding telly. 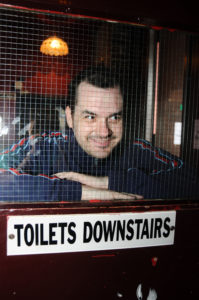 Aussie Jeffries returns to Manchester (he used to live in Whalley Range don’t you know) for what promises to be, if his previous material is anything to go by, a hard hitting, brilliantly crafted and uncompromising new show Unusual Punishment. Fresh off the back of his US TV series too.

Another third of We Are Klang (where is Marek Larwood this month?) and of course star of his own Man Down TV series. The Davies comedy juggernaut continues with another tour, You Magnificent Beast, featuring accomplished stand up with a wonderfully honed sense of the ridiculous. He’s also very tall.

Another great, and now very famous, act who honed his skills on the Manchester comedy circuit. Here he continues to be Winging It. Which is kind of what he used to do when he started out and in doing so proved himself to be that rare thing – a comedy natural. A great talent. 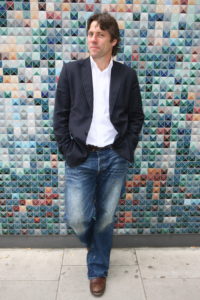 Along with Dead Cat Comedy, comic Rik Carranza presents this battle of the nerds. Gathering together top comics to fight it out for ‘sci-fi superiority’.

The star of RuPaul’s Drag Race and all-round superstar with her new tour Help Me I’m Dying.