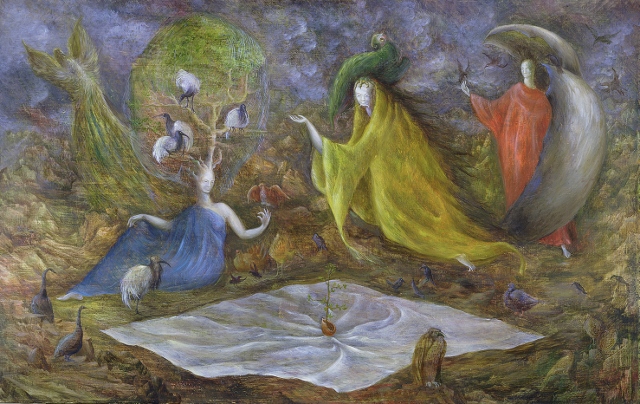 Athough artist Leonora Carrington was one of our own – a Northerner no less, originally from Chorley – it comes as something of a surprise to learn how much better known she is in her adopted home of Mexico.

As Lauren Barnes, assistant curator of the new Carrington exhibition at Tate Liverpool, tells Northern Soul: “She was totally taken up and accepted as a Mexican artist, included in exhibitions in Mexico in the 60s as a Mexican artist, and she had this incredible commission to paint this mural for the Museum of Anthropology in Mexico City (The Magical World of the Mayas 1963, which is included in the Tate exhibition) that was just reopening in the 60s. So she was accepted as someone who could speak for Mexican history and someone who really engaged with it too.” 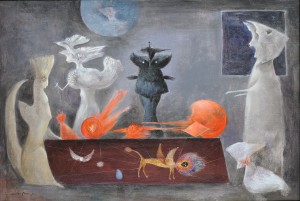 While Mexico consistently celebrated its resident English artist throughout her life, the last UK retrospective of Carrington‘s work was at the Serpentine Gallery in London in 1991, some 20 years before she died. Individual pieces of her work have popped up in various exhibitions over here but more often than not she’s spoken about in connection with her relationship with surrealist Max Ernst.

It has to be said that it’s a good story. Carrington was in her early 20s and he was an established artist in his 40s when they met, fell in love and ran away to France – Ernst leaving his wife behind. But the Second World War intervened and the German Ernst was arrested by the French and then by the Gestapo as a ‘degenerate’. He was incarcerated and Carrington fled for Spain and eventually Mexico in 1942.

Though the relationship had an effect on her (she wrote about it in her famous work Down Below) and surrealism was an influence on Carrington’s work, it certainly didn’t define her and, after all, the affair only accounted for a few years of a very long and productive life. Appropriately the work in Surreal Landscapes, brought together by Mexican author Chloe Aridjis and curated by Tate Liverpool’s artistic director Francesco Manacorda and Barnes, shifts focus from both Ernst and the surrealists, instead choosing to concentrate on key Carrington themes. It also draws parallels with contemporary artist Cathy Wilkes who is exhibited alongside Carrington in the other section of the gallery’s fourth floor exhibition space. 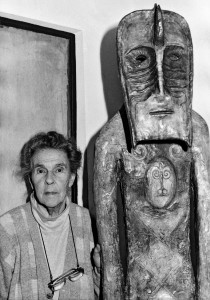 On the motivations behind the exhibitions Barnes says: “We were quite interested to bring two artists who are, on the face of it, quite different – obviously operating in different generations and in different places with very different styles – but finding connections between them. There’s something about their interest in thresholds, boundaries are not clear, boundaries between life and death, between different worlds and interpersonal relationships are kind of mixed for both of them in a quite interesting way.”

Both exhibitions are part of Tate’s programme’s ongoing commitment to female artists – Marlene Dumas has just opened in London and Sonia Delaunay and Agnes Martin will follow later in the year. Considering how women have been side-lined in pretty much all aspects of the arts for centuries, this is crucial.

“It’s the remit for public museums to place women on an equal footing to men,” explains Barnes, “and to try and excavate some of the stories that have been pushed aside.” In Carrington’s case, “I think by doing that it helps you to understand better some of the male surrealists and the approaches they have taken. You start to look at the way that women were seen in terms of orthodox surrealism – the whole idea of the woman as the muse and as a girl rather than a strong woman. I think when you start to recognise what women actually did it helps you to unpick the way the balance of power was within these movements in some ways. I think it’s really important to reinstate women throughout history but also that they are reinstated on their own terms, not in terms of their relationship to a man.” 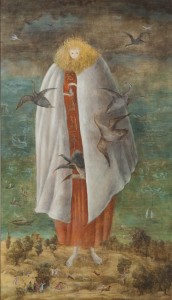 It seems unfair then that Carrington isn’t one of the best-known surrealists. The likes of Carrington and her fellow female surrealists – Dorothea Tanning and, to a degree, the photographer Lee Miller – are often spoken about in surrealism terms in association with the men of the movement. Plus, it’s the more famous names of Andre Breton, Salvador Dali, and Marcel Duchamp that we associate with the movement. But Barnes is hesitant to promote and pigeon-hole Carrington as such, preferring to see her work for its own merits rather than as a part of a larger grouping.

“Because her work is not easily catergorisable it doesn’t relate to many other people’s work so there’s this tendency to try and understand it terms of surrealist imagery, ideas of the dream and everything that came out of that. But actually, even though she’s working with ideas around the dream and animals – which are important in orthodox surrealism – she’s doing quite a different thing so it doesn’t necessarily help to see her work in those terms.”

In fact, Carrington was a unique voice and a pioneer. Her other-worldly, often eldritch work gathered inspiration from disparate areas and channelled them into her own idiosyncratic style.

“It’s funny,” muses Barnes, “because you couldn’t then say that she is a Mexican artist because, all the way through, her work shows influences from all over the place. The whole [Mexican] culture around death I know really fascinated her and the idea of the days of the dead, laying out gifts to offer to the spirits, these things totally captured her imagination, but she’s had a lot to do with Celtic tradition and magic and all these things that were coming out of her childhood, stories that her nanny told her about witches and things like that. There’s definitely a Celtic side as well, just drawing influences from all over the place.” 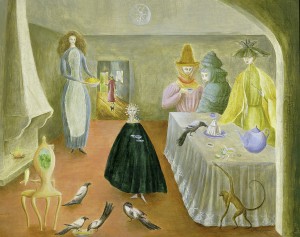