“It’s the idea that you get a solo show and you give it away.”

These are the words of John Hyatt, artist, musician, author, teacher, punk and scientist. A self-confessed optimist, he has imbued his new exhibition at Manchester’s HOME with a tantalising combination of individualist art practice and collaborative endeavour. Put simply, his intention is to demonstrate a new way of working.

“It feels like I’m at the centre of a web of connections, which is what it was supposed to be,” he says. “It does feel like there’s all these threads vibrating out.”

After more than 18 months in development, Hyatt’s show – Rock Art – has finally come to fruition.  So, what can people expect to see as they weave their way round the exhibition?

He adds: “For this show, I’ve tried to bring all the aspects of my life together. In the past, it used to be that I was in a band and I used to be an artist, but the two didn’t mix. And when I was made a Professor at Manchester Metropolitan University back in 1994 the art world couldn’t sanction an artist being a Professor. So I went from getting lots of invitations to do exhibitions to suddenly getting none. But now I think that has changed. What I’m trying to do is bring the artist, the musician, the pedagogue and all the other ‘me’s together finally in order to give them away again.”

In this vein, visitors to HOME will initially be presented with a series of solo works by Hyatt, including The First Great Deception and The Collection and Reading Room, the latter featuring a limited edition of Hyatt as a blend of tea. There is also the Rock Shop, a riot of merchandise based on his life and work.

However, Hyatt says that this part of the exhibition should not be viewed as a trip down memory lane.

“It’s not a retrospective in the sense that it’s not a history of past works. But it is a reflection on a long career as an artist and a musician. So it’s reflecting upon an individualist art practice as John Hyatt and asking what should art be and what should an artist be in the future. It’s asking the question, what’s changed? In various aspects I refer back to various incarnations of John Hyatt.”

After passing through these areas of personal objects and narratives, the focus shifts to Club BIG, a pop-up music club, debating chamber and live art space. Throughout the course of exhibition, Friday evenings will be dedicated to this diverse display of talent, featuring, among others, Jon Langford with Barkley McKay, Rosie Garland, Tom Hyatt with Maya McCourt and a performance by Hyatt’s band, The Three Johns. 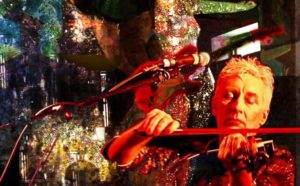 Hyatt explains how it will work.

But the people on stage aren’t the only element of collaboration in this unique space.

“For the art that’s going to be on the walls, I’ve worked with the second year fine art students from three art schools – MMU, Liverpool John Moores University and Salford University. I think this is the first time that a project has been coordinated across all three. And under the umbrella of Northern Flower Powerhouse, with artist and lecturer colleagues at the art schools (especially Mike Chavez-Dawson, Magnus Quaife and David Hancock), we’ve devised a way of working across those institutions on a project I’ve set where the students invent an alter ego artist and they make the work of the alter ego artist. Maybe three students might be one artist or one student might be three artists. The work of those alter ego artists will be the work that’s shown in Club BIG because I’ve got a long personal history of working as alter ego artists and I’ve had quite a long experience of working with other people as an artist.”

While Club BIG has been generated from Hyatt’s imagination, the name derives from a real venue.

“During the miners’ strike, The Three Johns played miners’ benefits every night of the week. The furthest afield we played was Club Big in Milan. They had all the footage of the Battle of Orgreave [a violent confrontation in 1984 between police and pickets at a coking plant in Orgreave, South Yorkshire] which you didn’t see in this country and that was the first time I saw the footage. Ironically, I also remember Club Big because we were playing the gig and at one point all the sound levels went crazy. I looked over to the left and the on-stage sound mixing guy was having a punch up with the security guard and he was falling all over the sound desk. Then the security guard handcuffed the guy to the stair rail where he couldn’t reach the sound desk. And so Club Big always stayed with me. I wanted a device to comment back on that history and also to enable the collective participation.”

Rock Art is Hyatt’s first show at HOME but he has a long history with Manchester’s Cornerhouse. In fact, this Wolverhampton-born artist, who has spent all of his adult life in Yorkshire and then the North West, was part of Cornerhouse’s first show back in 1986. Rather appropriately, it was called Connections, a theme which wends its way through his 2017 exhibition.

“It’s taking the idea of music and being in a band, which I have been in since I was 14, and taking that paradigm of working collaboratively with others and applying it to art practice. It’s music as the paradigm for the way in which we as humans need to work together for the future, for the future of the planet and the future of humanity on the planet. In grandiose terms, it’s about the need for humanity to move beyond an ego-driven existence.”

This idea of transmutation is key to Hyatt’s thinking, particularly when it comes to the name of the show. 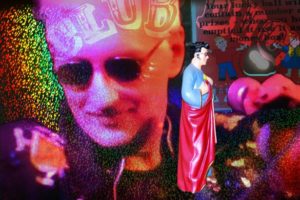 “It was never musical in the first instance. Rock Art is to do with cave painting, cave art. I’m saying that humanity is just at the beginning. And I think this time will be looked back on as a moment of transition in the same way that we look back on rock art.”

At the heart of Hyatt’s intention, though, is discovering what the exhibition has done for other people, not least the students. “The highlights of the show for me are to see people working together and being inspired by each other.”

Looking to the future is clearly part of Hyatt’s DNA, not least because a life-changing event made him re-evaluate his own path. After a quarter of a century in Manchester, first as head of fine arts at MMU and later as director of MIRIAD (Manchester Institute for Research and Innovation in Art and Design), throat cancer forced him to take a year off and reassess. Hyatt chose to grab life by the horns. He recently moved to Liverpool to assume a new role as Professor of Contemporary Art and Director of ART Labs at Liverpool School of Art and Design, a decision he celebrates.

As the interview draws to close, I ask Hyatt if he hopes for an afterlife for Rock Art. His reply is a fitting commentary on the exhibition, his life and his future.

“It’s a bit like throwing a stone in a pool and watching the ripples. But that’s true of anything you do.”