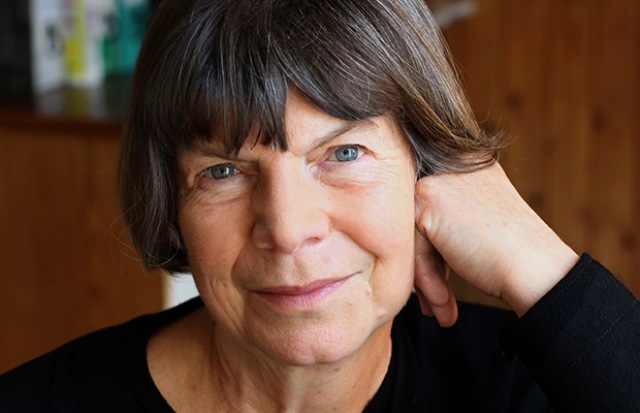 It’s not often I get nervous before an interview. Sir Richard Branson 30,000 ft over the Atlantic? He was more anxious than I was. Nigella Lawson via a crackly line on Boxing Day? An absolute dream. The Dalai Lama in a five-star Manchester hotel? A total pussycat.

But a literary giant, that’s another kettle of fish. Dame Margaret Drabble (also known as Lady Holroyd) is rightly considered to be one of the most important authors of the 20th century. The 75-year-old has published 18 novels, a number of short stories, screenplays, a host of non-fiction and edited The Oxford Companion to English Literature, all the while scooping up a slew of prestigious awards despite the fact that she won’t allow her books to be entered for competitions. And I bet you didn’t know that she is a Northern lass, born in Sheffield and schooled in York (she was a contemporary of Dame Judi Dench at Mount School).

Now this distinguished British novelist is coming to the Manchester Literature Festival. Next month she will talk at an intimate afternoon tea event at the city’s historic Midland Hotel (famous in some circles for being the place where Rolls first met Royce). Drabble says she is looking forward to her trip.

“I don’t come to Manchester very often and I’m always surprised by how much it’s changed,” she tells me. “I’m from Yorkshire so I’m excited to be coming to the ‘other side’.”

Now a resident of London and Somerset, does she give much thought to her Northern roots?

“Yes, I think about it a lot. Whenever I have an excuse to go to Sheffield, I go. I feel quite strongly that I’m not a Londoner really even though I have lived in London for a long time.”

The promotional material for Drabble’s appearance at the Manchester festival bills her as a ‘grand dame’ of modern English liteature. She laughs: “I can think of worse things I’ve been called in my day.”

It’s hard to imagine anyone casting aspersions on a woman who, among journalists at least, is considered to be relaxed and chatty, is Maggie rather than Margaret, and has done so much to advance the cause of women writing. For an over-achiever, she’s also incredibly modest, putting her success down to luck.

“I feel that a lot of luck has been involved in things like timing, what was going around in the cultural world when I was surfacing. I was a woman writing at the right time and in the right place.”

When Drabble first came to the fore, she did so in a blaze of light, not afraid to shy away from controversial topics. The Millstone, published in 1966 and written when she was expecting her third child, focuses on a young, unmarried academic who falls pregnant after a one-night stand and, although single parenthood is not socially acceptable, chooses to have the baby rather than seek an illegal abortion. Not surprisingly, the subject matter went down like a cup of cold sick among certain sections of society.

Writing in The Guardian in 2008, Drabble reflected that women today “have forgotten the bottle of gin method. They are lucky. It was the old wives’ abortion remedy that dominated my youth…If you didn’t know a backstreet abortionist or a discreet Harley Street practitioner, this was how you did it. You sat in a boiling bath and you swallowed the gin. Sometimes it worked, and sometimes it didn’t. We were ignorant, and fertile, and full of fear”. 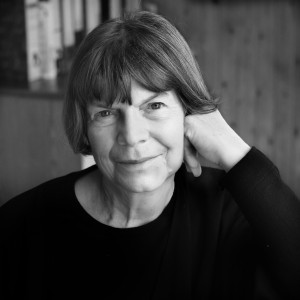 So, has Drabble been surprised by how much society – and the reactions to women writing within it – has evolved since she first took up a pen?

“It’s changed beyond all recognition,” she says. “For instance, abortion was illegal when I started writing. When it became legal [following the passing of the Abortion Act 1967] that did change women’s progress. But I expected that to come about because the [abortion] law was so primitive and wicked. However, I hadn’t expected the institution of marriage to dissolve as dramatically as it did. People lead much freer sexual lives now. And I hadn’t expected the speed of change to be what it has been.”

Of the current crop of women writers, Drabble admires, among many others, Helen Simpson.

“I like Zoe Pilger and I quite enjoyed Bridget Jones. And Helen Simpson is a wonderful writer. She writes about women in situations that didn’t exist before but could have been predicted. There are a lot of very good women writers out there today.

“But it’s much harder to find original material today because everything is aired so instantly now. It’s a cliché to say we have few taboos left but it’s true. To find new territory of your own is difficult. I think that’s why there have been lots of historical novels written in recent years.

“When I started writing, I wanted to tackle what happened around me. But I have friends who are writing historical fiction. I’ve just read Philip Hensher’s new book, The Emperor Waltz, which has an absolutely weird interweaving of different historical periods. There’s a lot of that going on as well.”

By her own admission, Drabble isn’t a speedy writer. Her latest book, The Pure Gold Baby, was five years in the making.

“I was writing that book very slowly, partly because I wasn’t sure if I should be writing it all,” she admits (the story is based on a family Drabble knows, including a girl born with special needs). “But I do write very slowly now. I don’t need to finish it, it’s nice to have a project on the go. It’s more satisfying.

“When I finish reading a book, I feel quite lost and I don’t want to start another one. It’s very like writing a book. I like living in another world and when I finish [writing a book], I have to think of a whole new lot of circumstances which is very hard.” 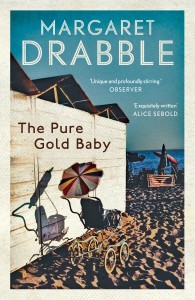 The Pure Gold Baby has been described by The Independent as a “superb new novel, a richly complex narrative voice” which achieves “a choric magnificence hardly equalled in her earlier work”. No, I don’t know what choric means either but it sounds pretty damn impressive. However, the reviewer goes on to say that “The Pure Gold Baby thinks profoundly on living in time, where, as we look back from the closing season of our lives, ‘all seems fore-ordained and fore-suffered and yet all is unfinished and unknown’.”

I wonder if, among her 18 novels, Drabble has a special affection for a particular one. Charles Dickens described David Copperfield as his “favourite child”. Which of her books is the favourite child?

“The Needle’s Eye. I think it’s my best, it’s the longest and it’s hard to read. When people tackle it, they like it a lot. But not many people have read it, I think that’s why it’s my favourite. My son read it for the first time recently and told me that people don’t write books like that anymore [it was published in 1972], with long passages and a moralising tone, and people don’t write as slowly as that now.”

The American author Joyce Carol Oates once described The Needle’s Eye as “an extraordinary work”, a book that “not only tells a story deftly, beautifully, with a management of past and present (and future) action” but one that “demonstrates Miss Drabble’s total mastery of the mysterious form of the novel”, adding that “it succeeds in so re-creating the experiences of her characters that we soon forget they are fictional beings”. Perhaps more people have read and enjoyed The Needle’s Eye than Drabble thinks.

Of course, Drabble isn’t the only writer in the family. Her husband is the biographer Sir Michael Holroyd and her elder sister is the novelist and critic Dame Antonia Susan Duffy, known as A. S. Byatt, author of the acclaimed Possession. I hesitate to approach the subject of Drabble’s sister. Much has been written about their enmity and many reasons proffered for the decades-long sibling rivalry, among them their mother’s favouring of her second child and Drabble’s decision to shelve her acting career and take up novel-writing. It would be an understatement to say this so-called ‘feud’ has been well-documented. Does Drabble think it will ever be resolved?

“It’s been inaccurately well-documented. It’s a story that people like but we don’t like the story at all.” And that, rather sensibly, is all Drabble has to say on the matter.

I bring the interview to a close by asking Drabble what she does to find peace. She’s talked openly in the past about suffering from depression and has tackled the subject of mental health in her writing.

“I walk a lot and then I worry what will happen when I can’t walk. I’ve always felt better being outdoors. That’s why I dread the winter and the cold and the dark. Walking is my remedy, even if it’s just a half hour walk.”

On that note, I bid farewell to Dame Margaret, and imagine her meandering across the moors reflecting on her next work of art.

Margaret Drabble will be appearing at the Manchester Literature Festival on October 16, 2014. For more info, click here 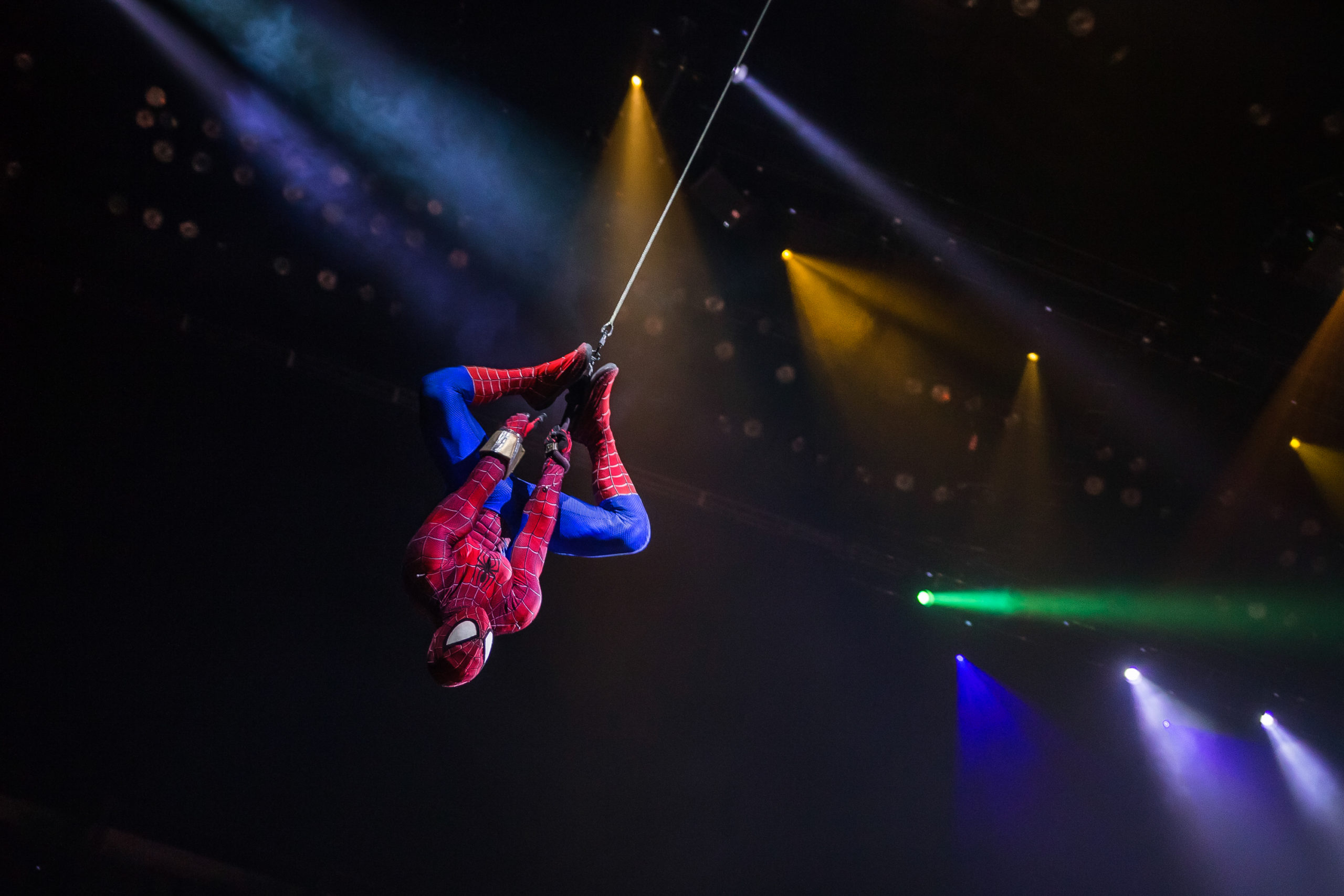 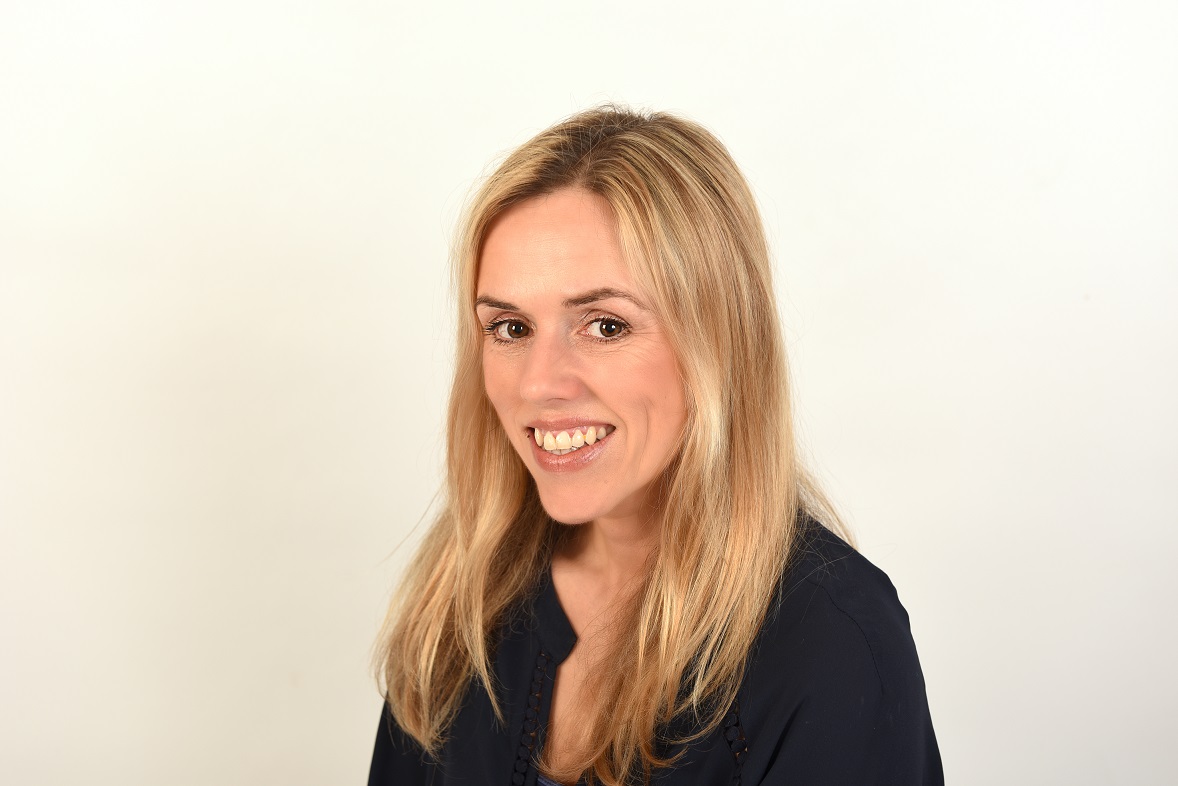 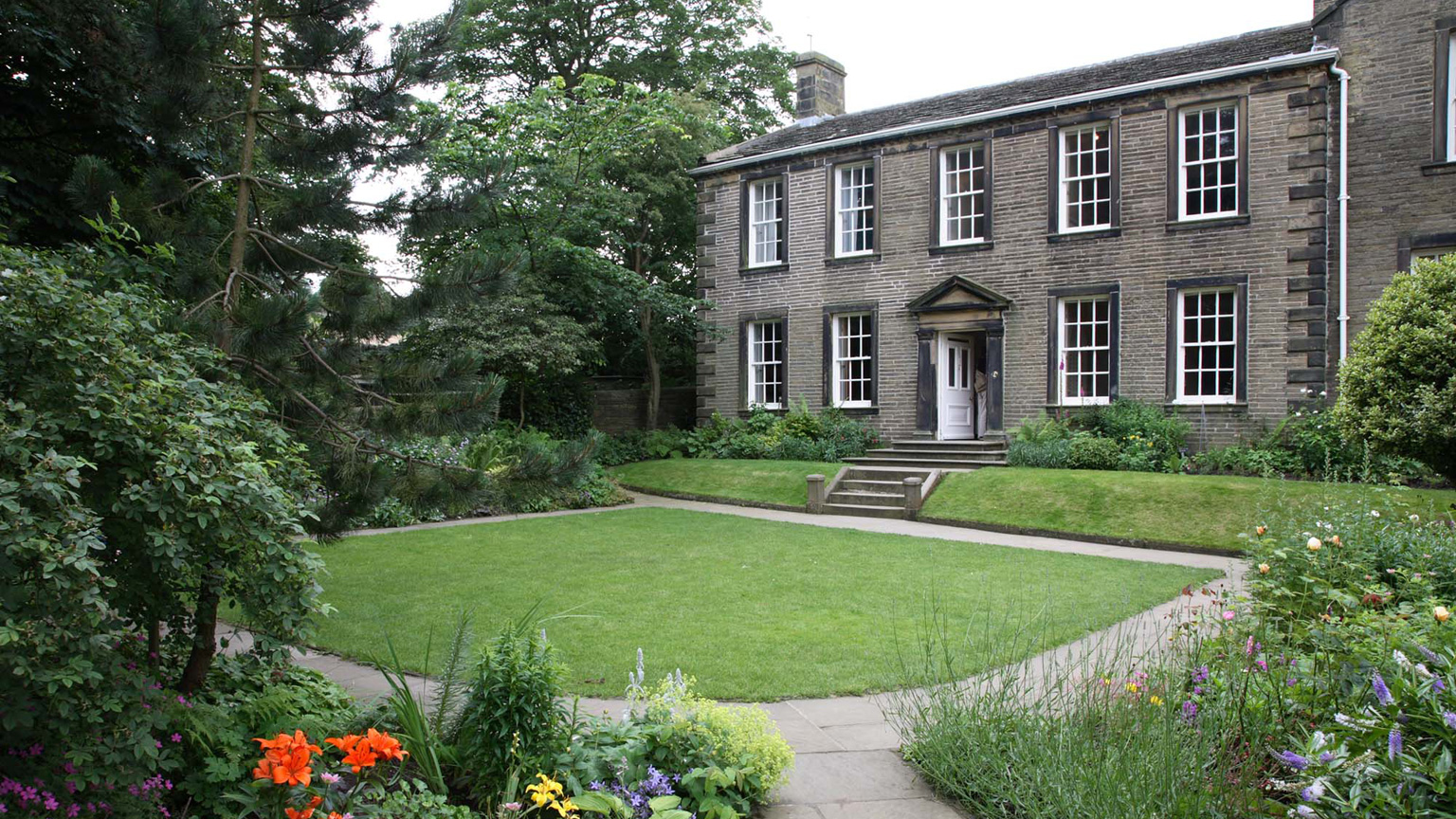 Why are we so keen to diagnose Emily Brontë? 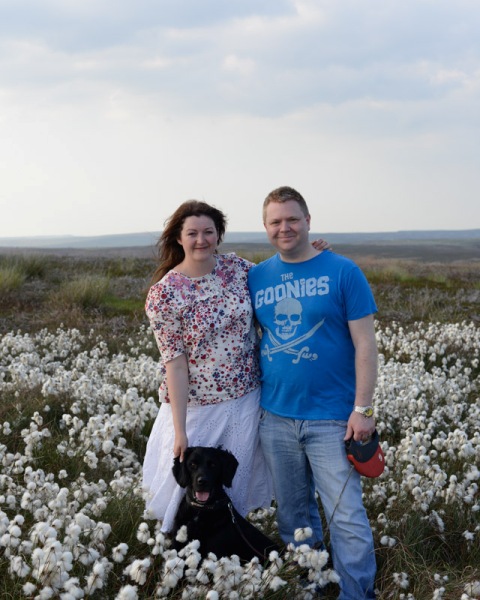 Speak out and speak up: one woman’s experience with the NHS