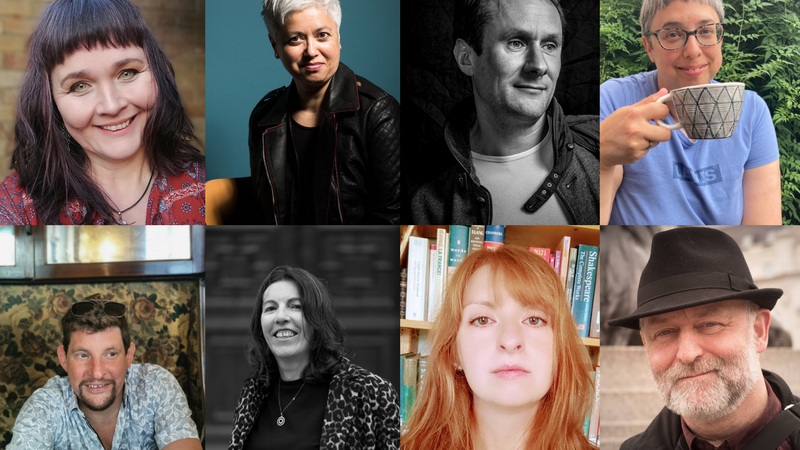 We’re delighted to have teamed up with Comma Press and the University of Central Lancashire (UCLan) as Media Partner for the fifth annual Dinesh Allirajah Prize for Short Fiction.

The submissions have been reviewed and UCLan students have devised a shortlist of eight stories. The 2022 shortlist includes a broad selection of writers at various stages in their careers, from first-time and shortlisted short story writers to published novelists.

The shortlisted writers are:

Philippa Holloway said of her shortlisting: “It’s thrilling to be shortlisted in one of the UK’s most exciting short story prizes – Comma Press do so much for the form and continue to help writers push boundaries and expand this vital area of literature. I’m especially delighted to see crime fiction showcased here, a genre usually associated with novels, but that fits the challenges of twisty and flexible short form writing so very well.”

Cate West said: “I’m thrilled to be on the Dinesh shortlist. It’s a competition which is both prestigious and inclusive, and I’m so happy my characters are finding an audience.”

Mark Graham said: “It is genuinely humbling to be shortlisted. Having had the opportunity to read some previous years’ winners, I have been dazzled by the quality and creativity of the short stories. To be among such esteemed company with the first short story I’ve written is very exciting.”

The shortlist has now been passed on to the panel of esteemed judges who will decide the winner of this year’s prize. The 2022 panel includes successful crime writer, Karline Smith; editor at Northodox Press, specialising in crime fiction, Tom Ashton; senior lecturer at UCLan, Helen Day; and writer for Northern Soul, Kevin Bourke.

About the shortlisted writers

Born into a Yorkshire vicarage, Kester Brewin has taught mathematics in South East London schools for more than 20 years and writes regularly for the national education press. The author of a number of books of non-fiction, notably Mutiny, an exploration of the impact of pirate culture, and Getting High, a history of the human quest for flight, he has twice presented at the UK’s premier TEDx event and been fortunate enough to speak on his work in the US and across Europe. More recently he jumped ship to focus on his first love: fiction. He was shortlisted for the Bridport Prize in 2020, and his stories have also featured on the BBC radio programme Short Cuts.

Elizabeth Chakrabarty is an interdisciplinary writer who uses creative and critical writing, beside performance, to explore themes of race, gender and sexuality. Her debut novel Lessons in Love and Other Crimes, inspired by experience of hate crime, was published in 2021 by Indigo Press, along with her essay On Closure and Crime. Her story Eurovision was shortlisted for the Asian Writer Short Story Prize, and published in Dividing Lines (Dahlia Publishing, 2017). Her poetry has been published by Visual Verse, and short creative-critical work has appeared most recently in Wasafiri, and in the anthology Imagined Spaces (Saraband, 2020). With her debut novel, she was chosen as one of the runners-up for the inaugural CrimeFest bursary for crime fiction authors of colour in 2022. She lives in London.

Ailish Delaney is a freelance content and copywriter who works with clients all over the world, but her real love is fiction. Having been shortlisted for the H.E. Bates Short Story Competition as well as the Writing Magazine Short Story Competition, she also co-authored and published a children’s book and has had poetry included in an anthology. A single parent, she lives in the East Midlands with her youngest daughter, dog, two guinea pigs, and a collection of wild birds who have taken up residence in the garden.

Originally from Leeds, Mark Graham has been working as an English teacher at international schools for almost 20 years. Mark has always loved writing; he has previously written restaurant reviews and travel articles for The Jakarta Post and an English grammar reference book (Boom! English Grammar Made Easy) for middle school students, which was published in Indonesia and the Middle East. His entry for the Dinesh Allirajah Prize was his first attempt at writing fiction.

Philippa Holloway is a writer and academic and teaches creative writing at Staffordshire University. Her debut novel, The Half-life of Snails, is out with Parthian Books in May 2022, and her short fiction/non-fiction is published in the US, Australia, Africa, Europe and the UK in various publications including Ascent, Bukker Tillibul, New Contrast, Litro, Literati, Lunate, Commonwealth Writers, and as a single authored chapbook with Nightjar Press. She has also won prizes in literary awards including the Fish Publishing Prize, The Scythe Prize, and the Writers & Artists Working Class Writers’ Prize. She has been commissioned for contributions to various interdisciplinary projects including Made From Light at Tate Liverpool, Power in The Land, Material Cultures of Energy and the resultant Energy Communication Toolkit (2021), and the Cognitive Sensations Project. She is Writer in Residence at Hack Green Nuclear Bunker and member of Liverpool University’s Literature and Science Research Hub. She is the co-curator of 100 Words of Solitude, a global writing project responding to the pandemic, and co-editor of the collection 100 Words of Solitude: Global Voices in Lockdown 2020 (Rare Swan Press).

Louise Tondeur writes fiction, poetry, plays and non-fiction. She studied drama at the University of East Anglia, trained as a drama teacher and worked in schools and community groups before returning to UEA to study for an MA in creative writing. As a result, she published two novels with Headline Review called The Water’s Edge and The Haven Home for Delinquent Girls, then she did a PhD at Reading University, travelled round the world, started a family, and became a creative writing lecturer while publishing mainly poetry and non-fiction. In 2017, Lou left her full-time job to focus on her writing. Her short story collection, Unusual Places, came out in 2018 and she is currently working on a series of crime novels set in Norfolk/Suffolk border country where her grandparents lived for many years. Lou teaches on the Open University’s creative writing MA as well as running her own online courses. She lives in East Sussex with her wife and son and two black cats, and blogs at louisetondeur.co.uk.

Cate West graduated with an MA in creative writing from Manchester Metropolitan University in 2019. She lives and works in the Midlands and was selected for the Writing West Midlands’ Room 204 scheme in 2021. Cate is interested in outsider narratives and stories of precarity. She teaches creative writing (adults and children). Recent publications include short stories with Nightjar Press, Lunate, A Coup of Owls, Last Girls Club, The Amphibian, and Janus Literary (selected for Best Small Fictions 2022). Cate is currently working on her debut novel. 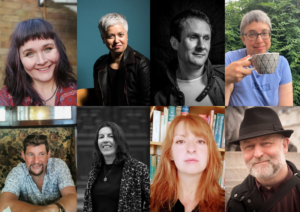 Open to both published and unpublished writers, this prize aims to seek out the best established and up and coming voices in the form, in honour of Dinesh Allirajah who passed away suddenly in 2015. Dinesh, who described himself as a jazz writer, lectured in creative writing at the University of Central Lancashire for eight years and was a long-term director of Comma Press.

The theme for the 2022 Prize is ‘Crime Stories’. Crime was just one of many themes/genres tackled by Dinesh in his work, and something he reflected on through his blog, Real Time Short Stories. Comma also has experience publishing crime fiction, having published two CWA anthologies during Dinesh’s tenure, and wants to use this increasingly popular genre to reach new writers with this year’s prize.

To ensure parity, entries will remain anonymous throughout the entire judging process. The winning writer will receive £500 and will have their story published online by Northern Soul. All shortlisted authors will be featured in an eBook anthology which will be published by Comma Press and sold online.

The winner will be announced at a prize-giving event in collaboration with the Northern Short Story Festival in the summer, details to be announced.