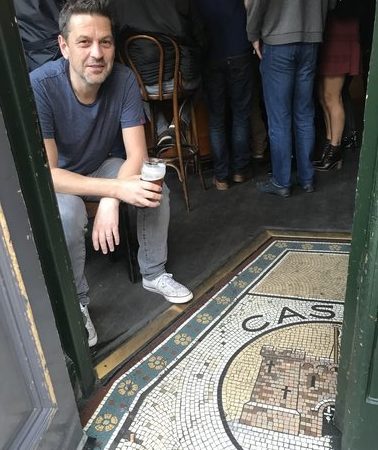 In a series of articles, Northern Soul’s Phil Pearson talks to all manner of fascinating folk about the room they use to write in, paint in, and do all things creative. This week it’s writer Ian Kershaw.

Three days before this interview I went to see Ian Kershaw’s play The Greatest Play in the History of the World at Manchester’s Royal Exchange. At the end of what actually is one of the greatest plays I have ever seen, I was conscious of a man two seats to my left taking quick breaks from clapping to wipe tears from his cheeks.

Fifteen minutes later that same man was suddenly centre stage doing a Q&A with his wife – who happened to be the show’s blindingly brilliant star Julie Hesmondhalgh. Having never met him, I hadn’t realised the bloke with the watery eyes was Ian Kershaw. When we met up days later at The Castle Hotel in Manchester’s Northern Quarter, I asked him about it.

“Don’t tell people I cried at my own play,” he says. “I laugh and cry at my wife performing rather than my words. It’s a play all about love and she is the love of my life.”

Kershaw has got one hell of a writing CV. It reads like a BuzzFeed top ten list of popular TV shows in the past 20 years. Before his current gig writing Coronation Street, his name rolled up at the end of Cold Feet, Shameless and EastEnders, to name just three. 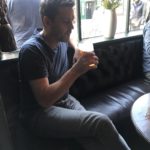 He was born in Oldham 49 years ago and trained as an actor at the prestigious Royal Welsh College of Music and Drama. That opened the door to numerous stage and TV appearances, including five minor roles on the cobbles in Weatherfield.

In fact, Kershaw is one of only eight people to have appeared in and also written Corrie. With writing credits as gigantic as his, you would expect an ego to match. But nothing could be further from it. His Converse remain firmly on the floor and, as you would hope, his writing mirrors the man: funny, warm and devoid of all pretentiousness.

We meet in The Castle because this is the place he goes to think of ideas for his next play, TV or radio project. It’s 6pm on a busy Saturday afternoon and, with a pint of Cumberland Ale in front of him, he tells me why this pub is his My Space.

“I think it’s important to come into Manchester and be part of the world you’re writing about. I spend a lot of time in pubs and in The Koffee Pot up the road and just wandering around Manchester. I write quite a lot now with Debbie Oates. When we first got together to write stuff, we came to The Castle. We got pissed and came up with an idea we thought was fantastic and, the next morning when we woke up sober, it was actually all right. 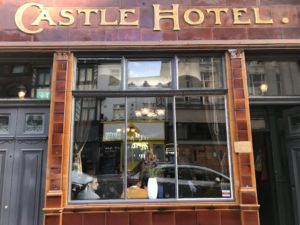 “Since then, this place has always been the starting point. This is where we come up with the story, the idea. We arrive with nothing and say, ‘what are we going to do?’ Then we come up with something and then it’s, ‘so this happens, so what happens next?’ and then, right, ‘what happens after that?’ And that’s when it gets exciting.”

He adds: “What’s also special about this place is a mate of ours owns it [former Coronation Street actor Rupert Hill]. It feels like a good place and it’s got good people in it – a good mix of people. What I loved was when Rupert first took this place over, he told his staff, ‘You never refuse anybody. We’re not that cool that we don’t let people who are not cool into this pub.’ And it is an environment where people from all walks of life come. It’s like a melting pot.

“So, me and Debbie come here, have a couple of pints, start chatting about ideas and stuff we are interested in and also talk about things that are already on TV and say, ‘why can’t we tell a story like that?’. Years ago, I did a BBC writers’ academy and one of the things they drummed into us was ‘make the good popular and the popular good’ and that’s what I try to do. It’s about showing ordinary people having extraordinary lives.”

He continues: “I don’t write Coronation Street in here, because you can’t give storylines away. I write it sometimes on trains and you are always covering it up, so people can’t read what you’re doing. For Corrie a couple of us meet up in Chorlton. Usually we get together at 10 in the morning and go on till 1 or 2pm. All very sober. We go away with three or four stories and write those up having had a nice breakfast and no alcohol whatsoever.

“When me and Debbie come to The Castle it is a place for us to come up with our own stuff. I don’t nick dialogue from people in here, but sometimes you hear things and the wit of the people of Manchester is just fantastic. You hear stuff all the time. I don’t get bothered in here. I’m completely anonymous. That’s the great thing about being a writer. But writing is a very solitary activity, sat on your own staring at a screen or a blank page and sometimes it’s quite hard. So, coming out into the world and being a part of it in a place like this is good. It also helps me because you’re constantly searching for things to write about and you see and hear things.

“Occasionally I’ll write a couple of lines down, so when I wake up in the morning, I can remember what me and Debbie talked about. The Castle is always the starting point of the whole process. It’s a thinking and drinking room.”

To read Northern Soul’s review of The Greatest Play in the World…click here.