In a series of articles, Northern Soul’s Phil Pearson talks to all manner of fascinating folk about the room they use to write in, paint in, and do all things creative. This week it’s cartoonist Tony Husband.

If you’ve picked up a copy of Private Eye in the past 30 years or so you will have seen the work of one of Britain’s most-loved cartoonists, Tony Husband. The black humour of his Yobs cartoon has been a favourite for many in the satirical magazine since the 1980s and has led to numerous awards and international recognition.

He started drawing the cartoon after getting “beaten up” by a gang of skinheads one night in 1982 after he’d been to a house party in Hattersley. Yobs was his way of “getting his own back” on the Doc Marten thugs from more than three decades ago. He says he’d like to meet them now to thank them for inspiring him to vent his anger in ink and humour – a decision that led to his work appearing in The Times, Punch and Playboy among too many others to mention. 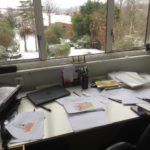 Husband draws in his house on a Hyde hillside, east of Manchester. His detached home overlooks the city, the airport and the Etihad Stadium, though he says he never looks at that. Husband is a Red. 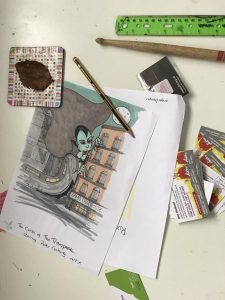 There is barely a spare gap on the walls of the stairs up to his studio. Dozens of framed and signed pictures and momentos battle for space and tell the story of a lifetime moving in the circles of Who’s Who entries – of which he is one.

Born in Blackpool in 1957, he is funny, friendly and as feet-on-the floor Northern as chips and gravy. When he recounts his little asides about his mates Ian, Stephen and Harry, he could easily be talking about three blokes down the pub. But he’s not. It’s Hislop, Fry and Enfield.

Private Eye editor Hislop said of the illustrator: “One of my favourite cartoons of all time is by Tony Husband. It shows a man who has just got out of bed staring at his chest of drawers. He says, ‘Another day another pair of underpants’. I’ve always thought that, as an analysis of the human condition, this is pretty telling and pretty apt.”

In the 1980s, Husband also co-devised and edited Oink!, a popular children’s comic, and its TV spin-off, Round The Bend, for Hat Trick Productions. On top of all that, he has published numerous books, including one about his dad’s dementia called Take Care, Son and one about his son, focusing on Paul’s heroin addiction called From A Dark Place. 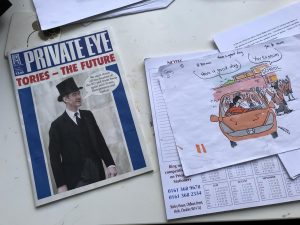 This, in his own words, is Husband’s My Space.

“I come in here about 10-ish and have about three coffees. I like listening to Radio 6 when Marc Riley is on. He’s a friend so I listen to his programme when I work. I take the dog for a walk about lunchtime and then work into the evening. I work as long as I can, until late. I’m not tied to a set routine. If I’ve got a deadline, it can be long days in here, but when I need to think of ideas I might go and lay on the bed.

“The view here is amazing. You can see Manchester Airport over in the distance and I watch the planes coming in. They’re every few minutes. But it’s very quiet in here. I love nature and I have got all these trees. I’m not overlooked but the neighbours are lovely both sides. In the summer I sit in the garden or in the conservatory and work. 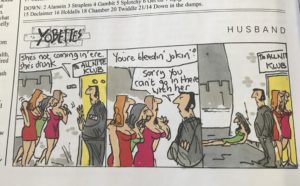 “It’s very light and warm in here in the winter. It’s an easy room to work in. It’s not big. All I need is the desk in front of me and a piece of paper. I could work anywhere, but it’s really comfortable. My dog Seve lies under the desk a lot, he’s my constant companion. He’s a rescue dog. Seve Ballesteros is a big hero of mine. I gave him a cartoon when we went to Santander. He loved it and came to see me the next day and gave me a golf club.

“Carole, my wife, comes in and works in here. It doubles up as an office when she’s doing the books. Some days I have set things to do for different things and there’s always Private Eye cartoons I have to do, but there’s no rush with them – they’ve got a backlog. 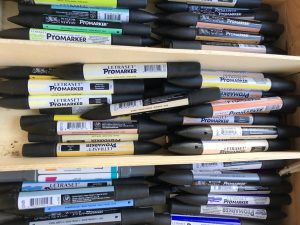 “Some days there’s nothing to do and I have to create, but I don’t have any problem with that. I’ve never had a writer’s block, touch wood. Even at the very worst of times, I can still do this. I suppose it’s my escape. A place to hide, a place to go. I get lost in my work and music, which has been a huge part of my life.

“I’m friends with lots of the bands in Manchester. Manchester is a small community, a village and everyone supports each other. There’s no rivalry.

“I like to have wine in here as well at night time. A glass of white or a Rioja. I just have a scanner and a laptop in here. I don’t get distracted. I used to be on Facebook but I rarely look at it now. I put cartoons up on Twitter. I have all my colours, Pantone ProMarkers colours. They’re really quick at getting the effect. I’ve got filing cabinets full of stuff, lots of junk and a planner on the wall. 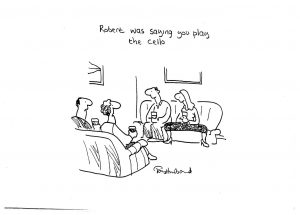 “It’s my own space. I love light. I don’t like to be boxed in and there’s uninterrupted views.

“I don’t think about my work going into Private Eye and books and everything, and then going all around the world. It’s just the piece of paper in front of you and I don’t think about the bigger picture really. It’s only when you meet people, you think ‘I’ve made some sort of impact’.

“But you don’t think about it. I’m not smug or arrogant about it. It’s just what I do.”

Take Care, Son and From a Dark Place: How a Family Coped with Drug Addiction are published by Robinson and available to buy now 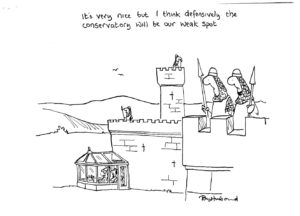