Naked Ambition at The Calder

Kevin Bourke September 5, 2013 Art Comments Off on Naked Ambition at The Calder

So there I am at the press opening of The Calder, The Hepworth Wakefield’s new contemporary art space, sipping tea and chatting idly with The Guardian’s Martin Wainwright. As casually as you like, a naked young man wanders over and perches yards away from us on an old jet engine. “Not long ago, something like this would have had the tabloids in a frenzy,” observes Martin sagely, gesturing around him at the 600 square metre development, where, I now notice, another naked young man perches atop another part of the artist Roger Hiorns’ presentation of his Youth series. “Some things have changed for the better, I suppose.”

As Martin wanders off towards another of his many acquaintances, I set out to discover more about The Hepworth’s intriguing new space on the banks of the River Calder and its opening exhibition.

The ground floor of Caddies Wainwright Mill, a 19th century former textiles mill only a few yards away from the gleaming Hepworth, is itself celebrating its second birthday. It’s still deliberately a little ragged round the edges and full of intriguing hints of its former lives, not only as a mill but, more recently, as a musicians’ rehearsal space, studios and similar bohemia. For the next couple of months, and with everyone determined to keep it as flexible as possible for the foreseeable future, it’s home to the largest presentation of acclaimed international artist Hiorns’ Youth series, much of it newly commissioned, and comprising found objects such as street benches, jet and car engines and stainless steel preparation tables. They are all ‘activated’ through the presence of a naked youth, at which point a small fire is set on the object, closely observed by the youth until it goes out.

“There are two of them at any one time, recruited from local art colleges and performing art schools. You’ll notice they look not unlike a younger version Roger himself when you see him later on,” imparts a friendly PR person. 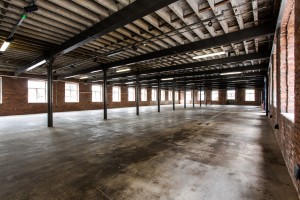 There’s also a live streaming of interior sounds from Wakefield Cathedral transmitted into the space to provide ‘an atmospheric intervention’ connecting the two sites. The exhibition neatly coincides with nearby Yorkshire Sculpture Park’s Summer display of Hiorns’ startling and beautiful Seizure 2008/13. You may recall that Turner Prize-nominated Hiorns, who’s ten years younger than fellow Goldsmiths graduate Damien Hirst, transformed an empty council flat in London into a sparkling blue environment of copper sulphate crystals. Somewhat miraculously, that’s now been transported to a carefully-monitored new home in the Sculpture Park, which is an extraordinary place anyway in which to spend a day or six. The largest of its kind in Europe, it spans more than 500 acres and boast a remarkable, ever-changing landscape of permanent works, site-specific exhibitions and no less than six indoor gallery spaces for some fabulous temporary exhibitions, such as the recent and vibrant Yinki Shonibare show, soon to be replaced by the first major UK exhibition of work from Indian artist Amar Kanwar.

It’s a world away from the post-industrial setting of The Calder, you might think, but they’re linked by the sort of art and culture-based forward thinking that has the local council pledging a £100 million renovation of Wakefield Waterfront, including significant work on Wakefield Kirkgate rail station which is right next to The Hepworth.

“This is a series of works presenting the artificial surfaces within the world, a group of works that can act as proposals on how to behave,” says Hiorns back at The Calder, acknowledging that ritual, behaviour and the correct way to behave is a theme in his work, while the exhibition there implies “a new kind of ritual that aims to reconnect the human body to the objects and architecture that surrounds it”.

“Roger doesn’t see this as a performance that has a beginning and an end, just as a work of art,” offers curator Gemma Yates of Youth and its seemingly-casual naked young men. “So when visitors come to the space they need to experience it as they would an object, it’s not to have any kind of theatricality.

“The Hepworth Wakefield, and this region, with the Yorkshire Sculpture Triangle including the Park, is very interested in sculpture and new ideas of sculpture. So we’d been in touch with Roger, because he’s a really significant artist who thinks about sculpture and objects in a really challenging way, long before the idea of this building came about at the beginning of this year. Then it just seemed that Roger’s work and the idea of this building, both pushing the notion of what sculpture is about, really suited each other. Also Roger’s work, his use of that second-hand form, seemed to fit a space like this, which was redundant and about to fall into disrepair, but where you can be quite fleet of foot and don’t have the sort of restrictions you might have in a white-cube kind of space.

“It’s not just ‘job done, we’ve opened a new gallery’, we’re really aware of the site that we’re on and how it’s imbued with great history that can be useful for artists to work with. We’re highlighting that people should come down to this area of the city, that people should invest in it, and that creative industries should start thinking about these buildings a bit more.”

Images by Hannah Webster, ©Gabriel Szabo/Guzelian, courtesy of the artist and The Hepworth Wakefield 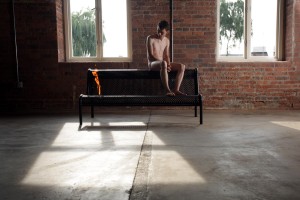 Where: The Calder, The Hepworth Wakefield

More info: upcoming events at The Calder include a special one-off performance (in his former rehearsal space) on September 20 by the legendary Bill Nelson, leader of Be-Bop Deluxe in the 70s, with all proceeds going to the refurbishment of Wakefield’s Unity Hall; on Friday October 25, there’s a free Oddball Life Drawing event