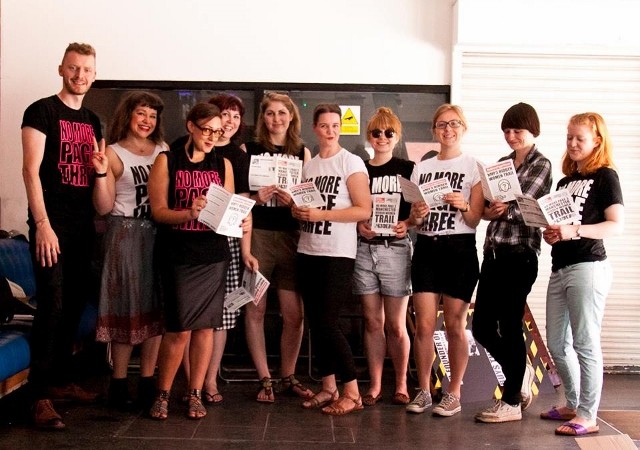 One of the biggest news stories of the week centred on a tabloid, boobs and a determined campaign to consign Page 3 to history. Whether or not you agree with bare breasts in a national newspaper, the No More Page 3 group has, if nothing else, sparked a debate on 21st century feminism, equality and freedom of the press. Here, one of its key activists, Anne Louise Kershaw, writes for Northern Soul about a roller-coaster week.

No More Page 3 began in 2012 when Jessica Ennis won an Olympic gold medal. Lucy Anne Holmes realised that, despite this fantastic achievement, the largest image of a woman in The Sun that day was of a young model baring her breasts.

My own involvement with No More Page 3 (NMP3) started a year ago when I set up the Manchester group. In terms of activism, this Northern collective has been such a success that there are now regional NMP3 organisations across the country. Here in Manchester we’ve marched alongside other amazing feminist campaigners and held festivals, workshops and all sorts of events across our fantastic city. The feeling of solidarity and support is incredibly powerful, and the conversations our campaigning have sparked has encouraged positive change.

On Monday night during our meeting in Manchester we began to spot tweets saying maybe Page 3 was ending. Online rumours suggested that the 44-year-old so-called ‘British Institution’ had finally had its day – and not a day too soon.

When Page 3 began, we lived in a more racist, ageist, sexist and unequal society. It was an era that saw the entertainment industries nurture the likes of Gary Glitter and Jimmy Savile. The cynics among us may believe that little has changed, but on Monday night it began to feel like it was starting to. 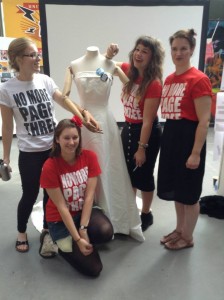 By 2am on Tuesday morning I was booked to appear on BBC Breakfast and BBC Radio Manchester, and that was just the beginning. The Sun‘s Page 3 model was absent from the paper and so I, and all the inspiring people I campaign with, spent Tuesday relaying from interview to interview, dealing with innumerable positive emails, tweets and comments of support – many of which were honest, open and heartfelt.

This positivity was fuelled by the belief that The Sun, our country’s biggest selling ‘family newspaper’, had finally started to move with the times. The ‘paper of the people’ had listened to everyone who had signed the No More Page 3 petition (all 217,000 of them) – the MPs, celebrities and organisations who wholeheartedly supported what we stood for; people who want The Sun to set an example and celebrate women for all their amazing achievements, not merely as titillation at the breakfast table.

None of us saw this as an overwhelming victory, but it felt like progress; a VERY small step, but a step in the right direction nonetheless.

Although we were overwhelmed with messages of support and congratulation, many of us spent some considerable time defending our campaign on several fronts. Attacks came from all over; from people who felt that a campaign wanting to ‘take work away from women’ was the most un-feminist thing possible, to those putting us on a par with the Charlie Hebdo killers. Some equated the tackling of media sexism with an assault on free speech, and there were comments suggesting we should be tackling female genital mutilation (FGM) instead.

In a debate on Radio One Newsbeat between myself and a glamour model, I made it clear that No More Page 3 is not about the models. We are not anti-model, and we fully support a woman’s right to pursue whatever career she wants. This is about context: if, every single day, the most prominent image in the most widely distributed paper in our country is a young, topless, woman, then this promotes sexism.

Even so, many people filled my twitter timeline saying that, if I am feminist, I should support women. But that is exactly what I am doing. If Page 3 of The Sun is a genuine attempt to focus on work for women, then maybe the editors could use Page 3 to show all the varied and amazing things that women do in society. They could have a teacher on Monday, a board director on Tuesday, a care worker on Wednesday and so on, all fully-clothed of course. There is a reason that The Sun only supports and launches the career of women happy to show their breasts for cash. And it doesn’t come from any philanthropic or feminist tendencies. 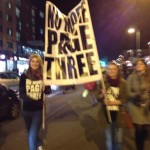 As for those who compared No More Page 3 with the Charlie Hebdo killers, they failed to see that this is free speech in action. Sexism censors! Page 3 censors women daily. It states, in no uncertain terms, that how you look is more important than what you say. No More Page 3 has never called for a blanket ban. All we want is for the paper to respect women and respect its own role in society by not printing images of topless young women in a family newspaper.

And the people who said we should focus on FGM? Well, feminists can campaign for more than one thing at a time. But while we’re on the subject, wouldn’t it be nice if The Sun used Page 3 to promote the importance of such an issue. Every time I am told that ‘there are more important thinks than tits, like FGM’ I reply, ‘try telling The Sun that’.

Waiting in the wings, stewing in their sexist juices in the safety of the cyberspace, were the trolls. For those who say Page 3 is just a bit of harmless fun, you should see what happened on the day everyone thought The Sun had dumped it. My twitter timeline was full to bursting of people who had searched me out and created accounts just to troll me. I had abuse all day, from people slating my looks to the fact I wore make-up. One person spent time finding my picture and photo-shopping it to a Page 3 model’s body, only to tweet it to me with the title ‘Bitch’ and the hashtag #hypocrisy. They went so far as to photo-shop in my neck mole! Even if I’d been a Page 3 girl in a former life, there’s nothing hypocritical about it. Some of the most famous Page 3 stars – Sam Fox, Linda Lusardi, Melinda Messenger – all think Page 3 is well past its sell-by-date.

As my partner said: ‘You’ve knocked on some very rotten wood and now all the worms are coming out.’ And this is the tip of the iceberg. I campaign with people who have had it much worse for much longer. It is par-for-the-feminist-course. That doesn’t make it OK but it clearly demonstrates what a sense of entitlement #somemen have with women’s bodies. A sense of entitlement that Page 3 has encouraged. Threaten to do away with that ‘harmless bit of fun’ and things very quickly get dangerous, as many of our supporters discovered this week. 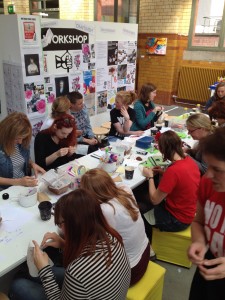 And then we woke to the news The Sun was playing a big prank, a jolly old jape at the expense of all those daft sods who’d believed for a second that The Sun was better than all that. On Thursday, The Sun printed a topless model on Page 3. We do not yet know if this is a permanent fixture or a PR stunt. It could be either.

Consider The Sun‘s head of PR, Dylan Sharpe. If you follow him on twitter, you will know that he spent some time tweeting pictures of the bare-breasted Page 3 model to writers and journalists who had previously hailed the absence of the Page 3 photo as a triumph for equality. In my opinion, this behaviour from the shop front of The Sun shows what the establishment really thinks of women.

We spent all day Friday responding to the press again. I have said that I think The Sun’s behaviour shows how little it thinks of its readership ­– the working class people it claims to represent, people who The Sun considers are incapable of reading the news without the reward of a pair of young woman’s boobs. Like a carrot on a string, The Sun patronises its readership and shows how little it thinks of women in what is in all likelihood a publicity stunt. During a time when the phone-hacking trials are in full swing, you’d hope it would know better.

But no matter what The Sun does, whether it continues to print young women’s breasts in the newspaper or slowly lets Page 3 slink slyly out the back door never to be spoken of again, the overwhelming positivity we have received since Tuesday morning proves that we have already effected change.

We will wait to see what happens over the next few days. And we will continue to campaign against media sexism regardless. Our biggest concern was that nobody felt downhearted. Yesterday, everyone from Girl Guiding UK, Rape Crisis, UNISON, NUT and Breast Cancer UK, as well as many more groups, unions and organisations felt that, at last, their voices had been heard, as we did too. Their voices have been heard, louder than ever – by each other and by the wider world. Our voices have united. Downhearted? Pah! The campaign is stronger now than ever.

This has never been about feminism versus glamour models, media sexism versus free speech, or that some issues are more important than others. It has been about the right and fair representation of women.

Anne Louise Kershaw is a freelance artist, curator, writer and campaigner for No More Page 3. She runs the No More Page 3 Manchester group which meets in the city centre monthly. Everyone is welcome.