On the Hoof: stretching theatre to its limits 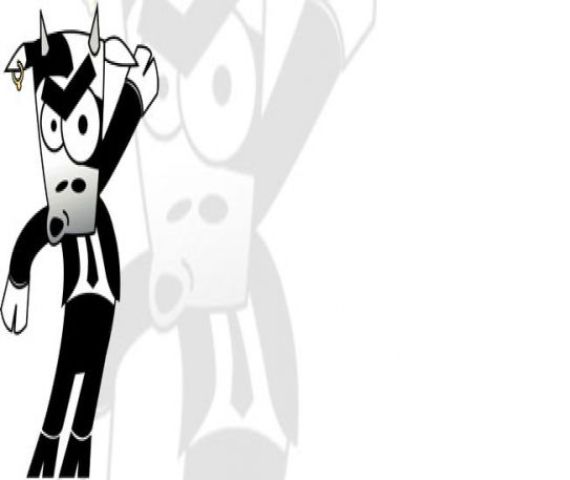 In a landscape full of relentless revivals and polished plays it is refreshing to see something unexpected, something bizarre and something completely spontaneous. This is Hoof! – a piece of theatre that has no script, no plot and no plan. It is created right in front of your eyes.

Almost a decade ago, spontaneous theatre crossed the Atlantic to Merseyside. Spike Theatre and Rejects Revenge teamed up with two graduates from The Second City School of Improvisation, Todd Stashwick and John Thies. After my quizzical look, Mark Smith, artistic director of Spike Theatre, tells me that The Second City is “the RADA equivalent for improvisation in America; it’s the place to train”. These guys have had the same schooling as Mike Myers and Bill Murray. And that’s what they brought to the table when this collaboration fathered Hoof!

It’s all about ensemble improvisation. “It’s a bit like a relay race in lots of ways”, Smith says. It’s an apt metaphor. They can pass it around, run two together, snatch it off one another to speed up the race. But drop the baton and it’s game over, so they have to work together.

At the beginning of Hoof!, six performers are introduced one at a time to help establish this improvisational method and structure clearly. The surroundings are bare but they take inspiration from anything. As a newly-suited performer enters, the others have to pick up on what they’re doing and support it: someone mimes shaving, so someone else becomes the bowl they shave into. 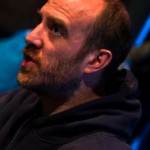 As well as these six, the musicians and lighting technicians are impressive contributors as they texture the actors’s antics. “Everyone is working together to make this unique experience happen – we have this idea of, you copy, you develop and then you stretch it again,” says Smith.

‘It’ is the material. It can be anything. “It is based in a mimic world – it doesn’t mean it is necessarily silent,” nor does it mean white gloves. “But you kind of create the space,” says Smith. “So here’s a box. Pass it on. What’s inside the box? Ahhh, it’s a head.’” As well as the performers’s bodies, imagination is the outer limit, but this group seems to possess a far-reaching one.

Smith explains: “The ensemble dictates the material. So that’s quite freeing as a performer. ‘Whatever happens, happens’ is the little tagline we use.”

My Hoof! experience was a journey from the dilapidated factories of the North of England to the open plains of the Western Frontier, through Silicon Valley and via a migrant shipping liner, all with the accompaniment of foundry bells. I don’t know any written play that has that kind of fluidity. And, what’s more, this ensemble will probably never do it again. 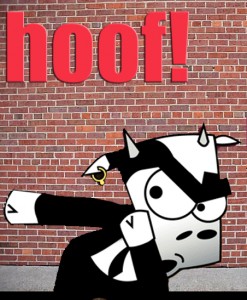 As a general rule of thumb, in the theatre there are certain expectations. One of them is repetition. You expect a show to be rehearsed for weeks and then go on a run. Hoof! inherently flies in the face of that expectation.

Smith says: “Having done long running shows, towards the end you find yourself not even thinking about what you are doing, it’s muscle memory…Once you’ve got into that trap, then that’s time to move on for me because you are just doing it for the money. And anybody who works in theatre will say that they are not really doing it for the money, they are doing it for the love of discovery and creation. In lots of ways, once you do hit that point, it kind of slightly drives you mad.”

A different kind of absurd madness prevails in Hoof! that defies another of those theatrical expectations: order. Long-running plays will endeavour to be performed the same way each night; in essence, in the way that best illustrates the director or writer’s vision. Such is the authority we bestow on writers and directors.

In Hoof! there is no such prescription. The strands of the show are wide ranging, non-linear, bizarre and stupidly funny. There is no sense of story or even rationality. Inspiration seems pretty arbitrary, but those initial ideas are stretched further than this physical cast would be willing to stretch their own bodies: a man in a suit plays a cobra who becomes a media mogul controlling the people and their press. The sense of absurdity is unshakable and admirable.

What is more, this is truly democratic theatre. Not in the way that the West End can reel in regional audiences via cinema screenings but democratic because everyone in the ensemble and the audience are present for the moment of creation. Often the cast seems just as baffled by what they are doing as the audience. It is important, though, that nothing is behind closed doors – it is shared by all.

It’s a shame then that Spike Theatre is “at the point where [they] are going to stop for a good period of time.” Even more tragic is that it is down to money.

“Local authorities have cut money to venues and the money’s just gone. All the costs keep going up but the earned income keeps going down.” It is rare to see a company manifest its “love of discovery and creation” on stage so abundantly. If Smith and Spike don’t return, they will be sorely missed.

What: Hoof! by Spike Theatre

Where: The Unity Theatre, Liverpool 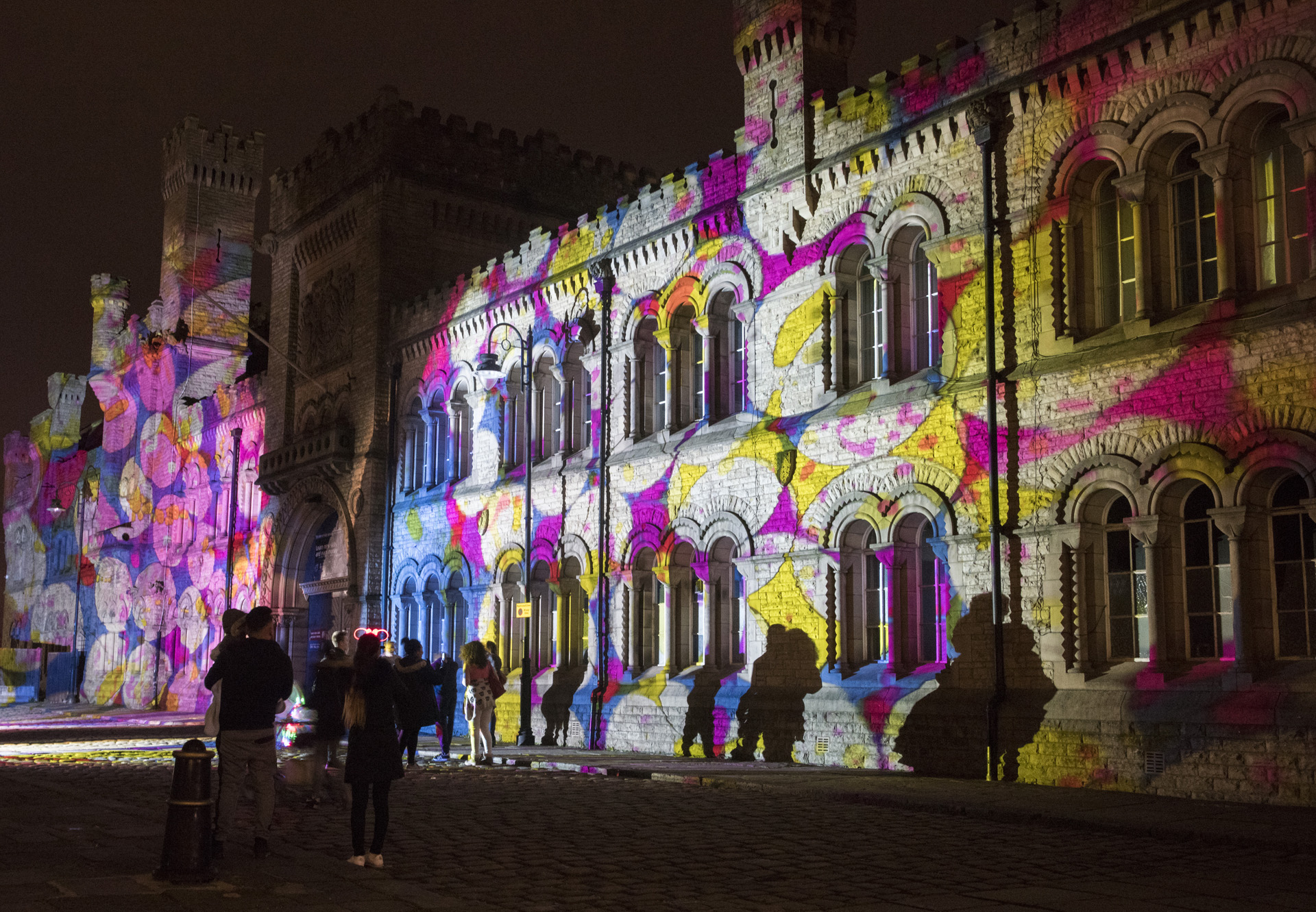 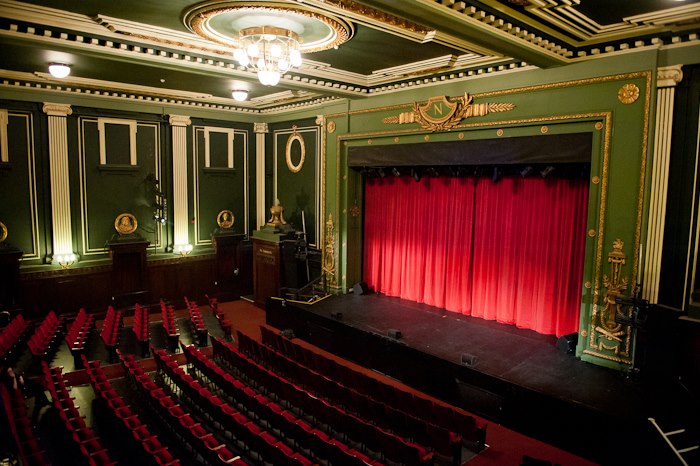 Lifting the Curtain at The Epstein Theatre, Liverpool 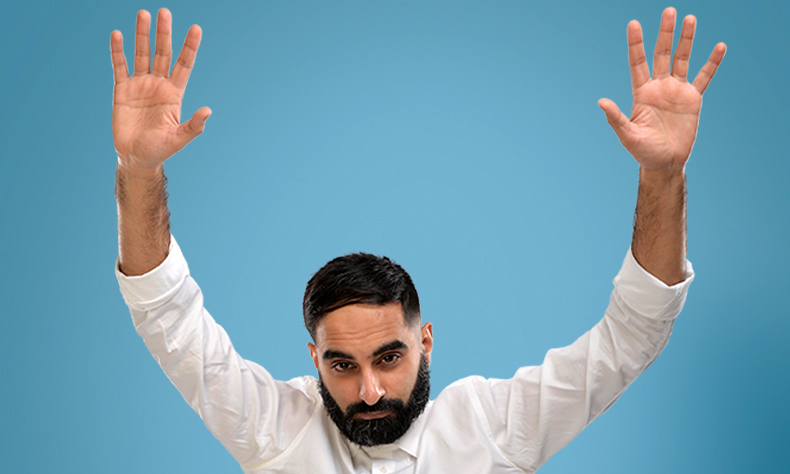 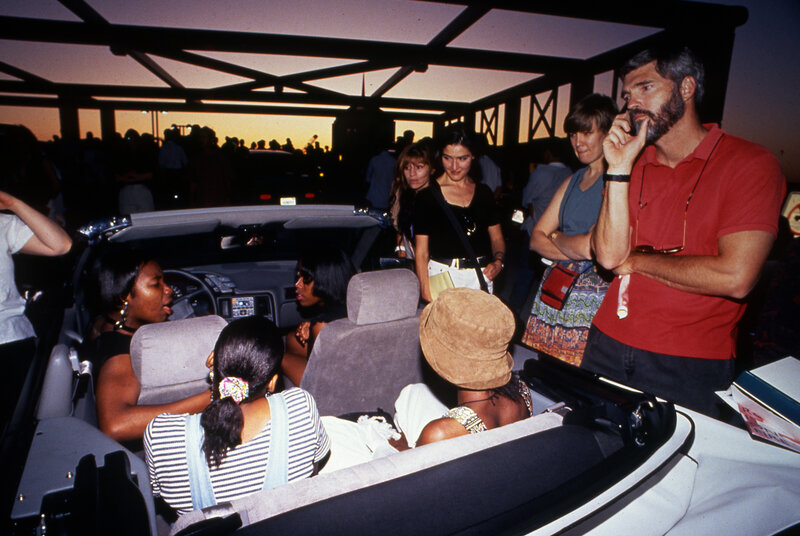 Exhibition Review: What Kind of City? by Suzanne Lacy, The Whitworth, Manchester