On the back of the recent successful ‘in conversation’ event with Clint Boon and Mike Joyce at Salford Lads Club, up next to the podium are music legends Peter Hook and Mani. Northern Soul managed to grab some time with Peter Hook en-route from France to Manchester.

Hooky and Mani have known each other for years so getting together for a bit of a chin-wag is nothing out of the ordinary. Ooh, if walls had ears, what tales of rock ’n’ roll japes past would we be party to?

Come September 22, you can, if you’re lucky enough to get a ticket to the almost sold out event, find out for yourself about what went on back in the day, without stealthily hiding behind a curtain, settee or something.

When two icons of Manchester music royalty hold court at Salford Lads Club there’s bound to be a few surprises. “It’s interesting how much history we share, me and Mani,” says Hook. “And neither of us have had a smooth ride. We do talk quite a lot but being grilled on stage will be interesting to say the least.” 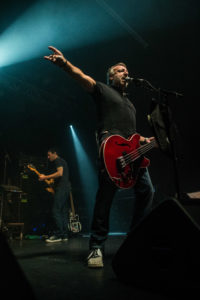 Relaying all manner of stories from life on the road with Joy Division and New Order, The Stone Roses and Primal Scream, as well as the Manchester scene in general, the pair have an impressive and extensive musical history, with their paths intertwining in 2005 when they formed Freebass.

The two bassists are huge Manchester United fans, so this could quite likely be a topic of conversation. The event is completely unscripted, and Hook says he’s looking forward to it.

“We’ll just get up on stage and take it from there,” he says. “What we’ll talk about is anyone’s guess.”

As part of the evening, there will be a Q&A allowing members of the audience to ask them questions. Will Hook be expecting the obvious one? You know, the one about New Order?

He laughs: “It wouldn’t surprise me at all. But if they knew the whole story, they wouldn’t ask it.”

But will any question be outlawed?

Both musicians are massive supporters of Salford Lads Club which is run by a team of dedicated volunteers who, by the way, will be delighted to give tours and talk about the famous club’s history on the night. 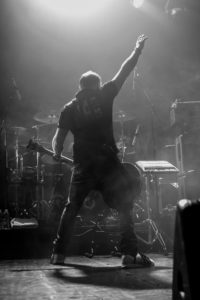 Hook says: “It’s a place very close to my heart. Being born in Ordsall it was part of my youth, I loved it there. It was incredible to have mentors to guide you, keep your mind engaged with what was happening around you and get you involved in different activities. The project manager, Leslie Holmes and the team are truly inspirational mentors and it’s an absolute pleasure for me to be involved in any way.”

Hook is currently touring the world with his band, Peter Hook and the Light, playing to a sold-out Albert Hall on September 29 and making an appearance at the Hacienda Classical at the Bridgewater Hall on September 27 (also sold out).

The Classical nights started in 2016 and, to date, they have played the timeless classics to more than 300,000 people of all ages.

Hook believes it’s down to the music being “handed down” through generations, from the Hacienda crowd and on to their kids and grandkids.

A limited amount of tickets for the In Conversation event are on sale via Eventim. Tickets are £12 each online and there will be a limited number on the door at £15. Doors and bars open from 7pm and the event starts at 8pm. All profits from the night will be going to Salford Lads Club and the kids/members’ activities and events.