“Manchester dominates my photography, I realise that now. And in some ways, this is my golden period.” – Richard Davis

Richard Davis’s Hulme Crescent shots are iconic. If you were lucky, you may have caught some of them at the British Culture Archive exhibition in Manchester last year. And you might still stumble across him shooting subjects old and new at his favoured Mancunian Way backdrop, charting the changing landscape in the faces of Hulme residents, then and now.

Davis’s work sprang from his Charles Barry Crescent flat at the height of the 1980s counterculture, taking in documentary around the notorious estate and portraiture at The Haçienda and The Boardwalk at the height of Madchester, as well as young football fans, an endangered breed, captured at creaking old stadia across the North West.

In January 2021, he made waves in the media after unearthing early shots of Nirvana playing their first UK shows. Now he follows up with his third book of northern social history, Football Fans, 1991, and so, exclusively for Northern Soul, here are some of the best images by Richard Davis. 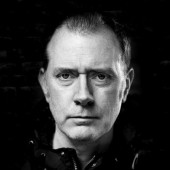