Right, I think, I’ll have a slap-up lunch and then I’ll nip upstairs and walk it off with a post-prandial meander around the largest collection of L.S. Lowry paintings in the world.

Thanks to the £3 million revamp of The Lowry‘s restaurant, this is exactly what I did. Home to theatres, galleries and a café, this Salford arts centre has of late raised its culinary game.

The £3 million relates to the building’s recent extension (which also includes expanded event space). Sitting in Pier Eight on a chilly Thursday in February, it’s obvious where the money has been spent. Gone is the cramped, walled-in eaterie; in its place a sweeping open-plan restaurant and capacious bar. The old tourist information office has made way for a chilled-out seating enclave which segues into a light-filled formal dining area, tables set far enough apart to ensure privacy without compromising on atmosphere.

And there are booths. Man, I love a good booth. And these ones are up there with the best. I slide into my seat and congratulate myself on an auspicious start to the review. My mum (hereafter referred to as Mrs Nugent) is equally impressed and we allow ourselves a wee tipple to get things started. 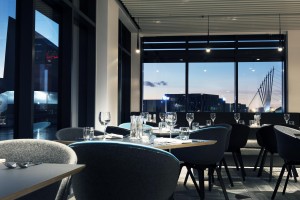 The cocktail menu is as long as it is tempting. And there are vegan-friendly alternatives on the wine list as well as gluten-free lagers – not common occurrences – as well as eight different gins. It all bodes well. Mrs Nugent chooses a glass of prosecco while I opt for a French 75, a heady combination of gin, Champagne, lemon juice and sugar. This grey, drizzly Thursday is looking up.

Looking around, the sumptuous redesign whispers sophistication with a soupçon of restraint. It’s all greys, yellows and turquoises, complemented by the sludgy grandeur of the Manchester Ship Canal a few feet from the outside terrace.

The press release announcing this new dining experience says that the extension incorporates two shipping containers but they pass me by. With eyes bigger than my belly, I watch the waitress (Rose – who is lovely and helpful throughout) approach with our starters: brown and white Cornish crab, mayonnaise, herb salad (Mrs Nugent); pumpkin soup, Little Town sour cream, sage, chilli oil and flakes (me). As will become evident throughout the meal, Pier Eight prides itself on using local suppliers from across Lancashire and Cheshire. 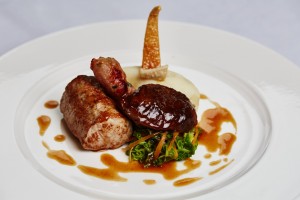 Lighter than light puréed brown crab and an ingenious use of flat croutons means that Mrs Nugent gives her first course the thumbs up. Meanwhile, I savour the delicately flavoured pumpkin soup, warm bread and a portion of butter topped off with coarse salt flakes. I’d try that salt trick at home but I’m not sure it would have the same effect on tepid Flora.

Then, THEN, the mains. I plump for Cheshire beef fillet and braised blade, complete with bubble and squeak, artichoke purée, buttered spinach and braising sauce. Meanwhile, Mrs Nugent opts for pork fillet, crackling, braised cheek, sausage, onion mash, Savoy cabbage and marjoram jus. It is Christmas day all over again and, to our surprise and delight, the theme continues with festive-sized portions. I say to myself, Helen, this is a marathon not a sprint.

While not technically a marriage of equals, the pairing of expensive and cheap cuts on my plate make for a happy combination, and the tender pink hue of the beef has me silently congratulating the chef (Oliver Thomas, formerly executive head chef at the five star Lowry Hotel, has devised the new menus for Pier Eight; he’s now on my Christmas card list). On t’other side of the table, Mrs Nugent savours her pork and relishes a side dish of roasted parsnips with parsley (“perfectly cooked and the seasoning didn’t disguise the flavour of the parsnips), her fulsome praise only tempered by the inedible nature of the perfectly sculpted yet hard as nails pork crackling.

And so to dessert. I’d filled my boots but Mrs Nugent soldiers on, determined to try the lemon posset with salted walnut praline and rosemary shortbread. Here, still, the festive-sized portions continue. No stinting on servings at Pier Eight. Mrs Nugent declares it to be “the best posset I’ve ever had”. And this from a cook who has gained legendary status for her puddings and cakes in every office I’ve worked in, not to mention someone who owns every cookbook ever published by Mary Berry.

Replete and content, I look across the canal to the twinkling lights of Media City and jagged beauty of the Imperial War Museum North. I wonder what Lowry, painter of the working class and archetypal man of the people, would have made of this fine dining just a few hundred yards from his life’s endeavours. Pier Eight isn’t cheap. My beef platter is priced at £21 and the pork dish is £17. I conclude that, by god, it’s wonderful that a hitherto unloved part of Salford now has this extraordinary arts centre, a restaurant rivalling anything I ate during my 15 years in London, and a world-class collection of an artist who defined the 20th century. Yes, I think Lowry would been OK with this.