“My mental health is at its best when I’m active.” Northern Soul does RED January

It’s January. The weather is rubbish, the piggy bank is empty and we’re all feeling a little bit sluggish. It can also be the time of year where our mental health needs some TLC. Northern Soul’s Emma Yates-Badley has registered for RED January 2019, a community initiative that encourages people to support their mental health by doing something active every single day. Emma will be writing about her experience in a weekly blog. In partnership with independent mental health charity, Mind, RED January can provide a focus in a characteristically tough month, empowering you to start the year as you mean to go on.

I am not what you’d call a naturally sporty woman. I don’t own fancy work-out gear or even a warm jacket with zipped pockets (I keep my phone and house key lodged in a sports bra that feels like a Victorian corset). But I do have a pair of much-loved running shoes.

There was a time when you’d only see me running to catch the last train home, and my idea of exercise was lifting a glass of wine to my face. Then I was diagnosed with Obsessive Compulsive Disorder and the game changed. I was unhealthy and felt tired just walking up the stairs. I knew I needed to get off the sofa and get fit again so I began with yoga, then turned to walking. Finally, after purchasing my first pair of purple and fuchsia (why?) running shoes, I hit the pavement.

Exercise was my saviour and the reason I’d leave the house. When I was well enough to return to so-called normal life, I felt fantastic but also began making excuses for not being able to work out and, as an anxious person, the idea of being judged at the gym was enough to make my stomach churn.

“Have you heard of Strava?” said a friend of mine who goes fell running for fun (not because he’s being chased which, to me, is the only conceivable reason). “You can map your routes, compare your times and share them on social media.”

Hard pass. No offence to you Strava folk but the last thing you want to give someone with obsessive-compulsive tendencies is a way to record and compare themselves against others. 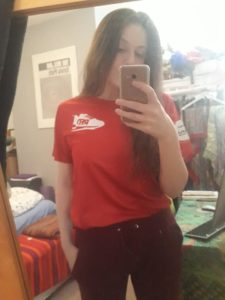 In 2018, I came across Couch to 5K which was more in my wheelhouse and simultaneously started reading about RED January, a month-long community initiative encouraging people to get active every day to improve mental well-being. I managed to complete the whole month but, once again, I let my fitness slide. Preoccupied with a work project until late November, I followed up with an indulgent and lazy December and then came New Year. After spending a month stuffing my face with cheese and necking enough booze to tranquilise a small country, the guilt set in like a family of stubborn mice. When I don’t take care of myself, or I’m burning the candle at both ends, I ruminate. And boy, can I ruminate.

I dislike January, not least because of the grey weather and lack of cash. Gone are the light-hearted, colourful adverts urging us to eat, drink and be bloody merry. We’ve done enough of that, my friends, and now we must pay. We’re sat there in our pjs, scoffing a family-size tub of Quality Street, just minding our own damn business when the idiot box in the corner of the room starts berating us. Diet programmes. Dating websites. Get Fit DVDs. Job search engines. They’re all there, attacking us like family members urging you to get yourself together because time is a-ticking. There is so much wrong with how the marketing industry preys on people during this time of year, but let me save you a little time, misery and self-flagellation, New Year does not work like a whiteboard eraser. 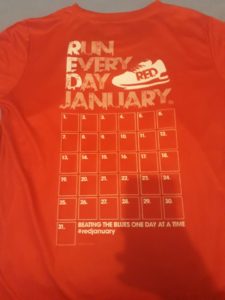 What I like the most about the RED January campaign is that it doesn’t expect you to become a ‘new you’ or develop rock-hard abs in three weeks. It doesn’t urge you to drink nothing but laxatives in the guise of ‘diet tea’ or spend hundreds of pounds on a fancy gym membership. It simply suggests that we should get out there and feel good. Create some endorphins, get into nature, feel the air on your face and support one another rather than competing. It’s an ethos I can get on board with, so I thought I’d give it another go.

Day one was an absolute killer. After my quiet New Year’s Eve down the pub turned into three bottles of prosecco, dancing to 70s disco classics and chips on the way home, I wasn’t feeling that peachy come January 1. Nevertheless, I managed to drag myself to the local park and do a lap of the playing field cheered on by Housemate and her extremely overexcited dog. Afterwards my head felt notably less fuzzy.

Days two and three felt far easier and I managed 20-minute runs. The weather was cold but the sky was clear, and the sun kept peeking through the clouds. I had to dodge people throwing balls for their dogs, and the shrieks of children in the playground cut through my 90s mega mix. Not exactly solitude, but I enjoyed it.

Day four saw me hot-footing it back to the office job and didn’t leave much time, or levels of can-be-arsed-ness, not to mention I had to run errands I’d neglected. However, the upside of not being a driver means that I walk everywhere including to and from work. 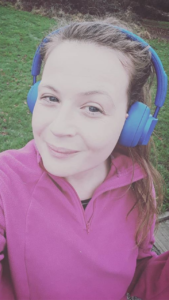 Day five was a return to the park, although I must admit to feeling self-conscious as a bunch of lads were playing football at one end of the field. Usually that’s enough for me to leg it in the opposite direction but I just cranked up some tunes and plodded on. By day six, I needed a break. My thighs felt like I’d climbed a mountain and my oomph was pretty much non-existent, so I took to the mat instead and did an hour of light yoga. By day seven my resolve had returned, and I hit the park for another decent run – even the miserable weather didn’t dampen my spirits.

So far this year, mostly owing to my work schedule, I’ve mixed running with yoga and I’m even looking to start swimming once a week. Despite the name, RED January encourages simply being active every day rather than committing to a run, meaning it can be anything from walking and running to cycling or something more adventurous.

Now that I’m back in the habit I’m hoping 2019 will be the year it sticks. But if it doesn’t, I know that’s OK too. I feel so much better when I exercise. Not just physically (although my jeans are feeling a little snug after the festivities), but my mental health is at its best when I’m active. I sleep well, and I seem to be able to control my thought patterns.

Oh, and I’ve ordered a running jacket with zipped pockets. There’s only so many times a girl can be jabbed in the boob with her house key.

For more information about RED Janaury, visit the website

For more information about what’s going on locally in Manchester, visit manchestermind.org 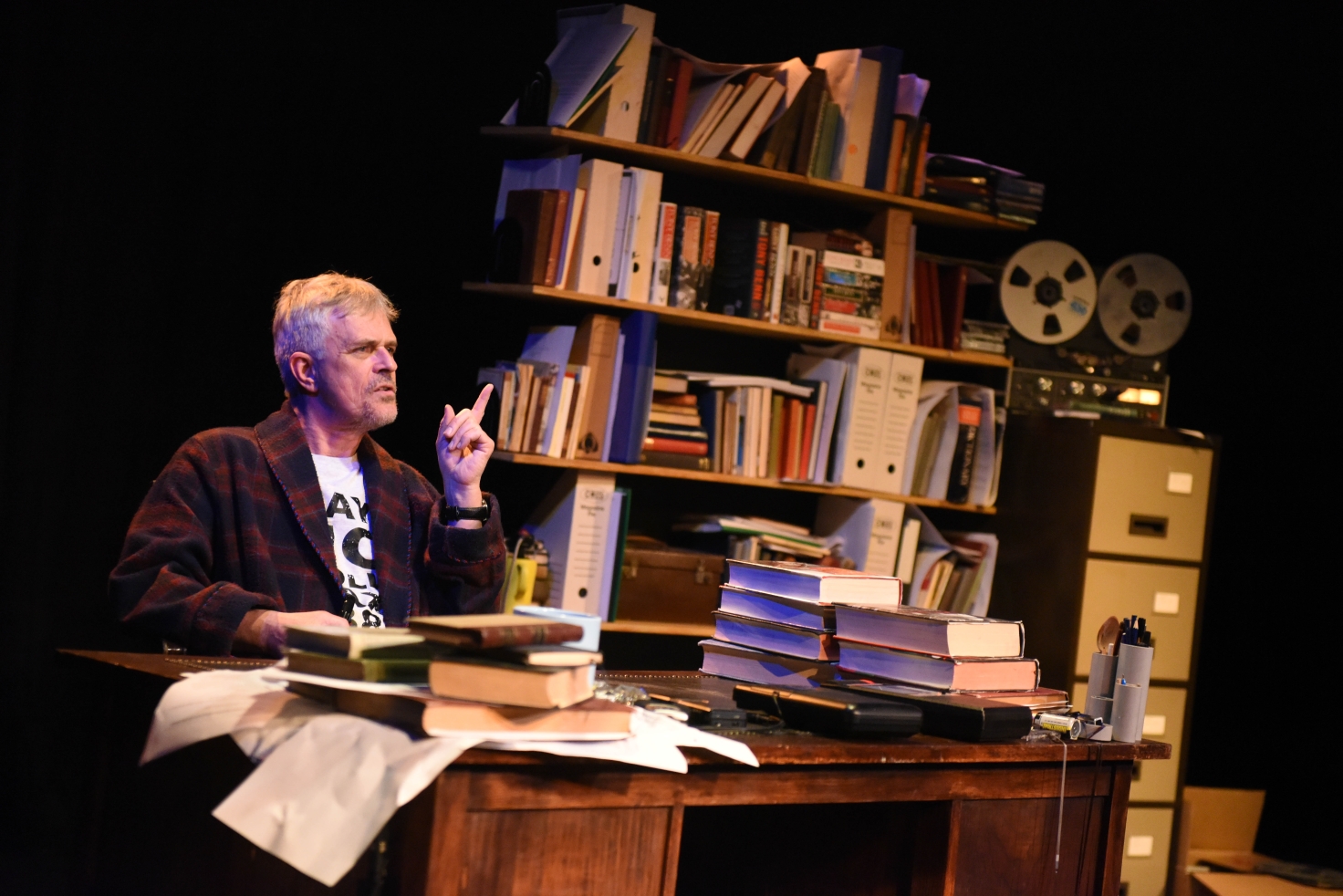 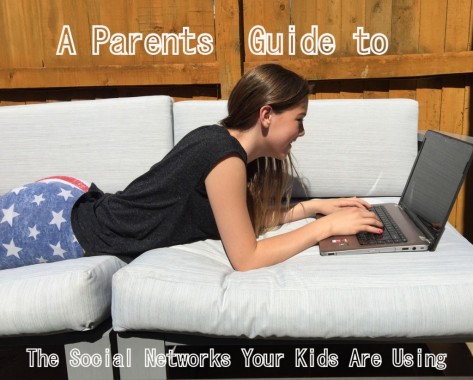 What social networks are your kids using?