This quote, attributed to Hans Christian Andersen, resonates with the folk at the Mental Health Foundation. The UK charity wants people to join a movement of musicians and music fans hosting their own events in aid of mental health awareness. Even though it’s early days, up and down the country people are doing just that in the hope of eradicating the stigma of mental ill health – and raising some much-needed funds.

MHF Live is a community-led fundraising initiative that aims to ‘Raise Awareness, Raise Money and Raise the Roof’ for mental health. “Anyone can get involved, and events can take place on any scale, anywhere,” says Hannah Currie, a consultant with the charity. “It could be a gig in a local venue, a choir recital in a town hall, a school disco, a music quiz at work or just a gathering with a few friends at home. It all counts.”

As a teenager, Currie volunteered with the Scottish Mental Health Arts & Film Festival, which is run by Mental Health Foundation. After leaving this voluntary role she became involved in music promotion and DJ-ing, running her own live music events in Glasgow and London under the banner MILK. She also became a film-maker and it was her documentary, We Are All Here (due for release this year), which led her back to Mental Health Foundation.

We Are All Here tells the story of Calum ‘Lumo’ Barnes, a Glasgow rapper who committed suicide aged just 21. It pieces together his story from his lyrics and video diaries that he left behind, as well as intimate interviews with his friends and family. The film won a Mind Media Award in 2018.

“Stories like Lumo’s are why MHF Live is so important,” says Currie. “Reaching younger audiences, ending the stigma, and fundraising so that charities like MHF can continue their vital work in prevention. I always kept in touch with the charity. I loved the work they were doing and what they stood for, not just challenging stigma via the arts but focusing on meaningful preventative measures and working towards a goal of a world with good mental health for all.” 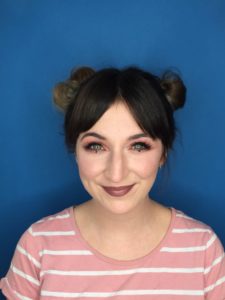 More recently, the charity expanded on its arts experience and launched a new music fundraising initiative. “They reached out to me to see if I could help to set it up. I was of course more than happy to, as it’s a cause that is close to my heart.”

Stories are important in counteracting stigma. Does Currie believe that music helps to break down boundaries? And is it a helpful/accessible medium for sharing information?

“Absolutely. Music can be such an important outlet for people, and shared experience in the form of lyrics helps millions of people realise that they are not alone. Creativity and the mind are inextricably linked so I think the really fantastic thing about MHF Live is that we are thinking about ways we can use music for good, to improve people’s mental health.”

MLF Live has included big name artists such as Rita Ora, Olly Alexander (Years & Years), Rou Reynolds (Enter Shikari), Tom Grennan, Dunstan Bruce (Chumbawamba) and many more (all of whom wore MHF’s green pin for mental health awareness and helped to spread the word). But at its heart, MFH Live is about communities and local artists.

For Manchester-based Kene Clayton, homegrown acts and local people are at the centre of his project. Clayton set up the music collective U.A.M around two years ago to bring local artists together as a community. As soon as he heard about MHF Live, he knew it was a “no-brainer” to get involved.

“If it raises funds, that’s all well and good, but if we can raise awareness and get people talking about issues and stop stigma, that’s where I want to be going with this. Mental health affects everyone, massively.”

U.A.M presents MHF Live takes place at Manchester’s Joshua Brooks on February 2. “It is a good way for us to raise money and showcase a lot of local talent,” says Clayton. “As well as introducing some of the younger acts.” 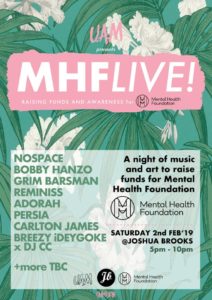 The event is from 5pm until 10pm and begins with the younger acts, all people Clayton has met through his work at U.A.M and as a youth worker, who will then be followed by the main acts. “That will be huge for them. To see people that they listen to watching their act and following them, that’s massive.

“We were so thrilled to hear of Kene’s event in Manchester bringing together the very best of local talent for a good cause,” Currie adds. “We have similar events taking place throughout the UK, organised by local folks, plus many smaller scale events which are equally as crucial.”

So, what’s next for MHF Live? “Hopefully we will keep growing and get more and more people joining the movement of musicians and music fans working towards a world with good mental health for all,” says Currie. “We’ve already had 770 people sign up for the free event pack so our job now is to help support and promote those hosting events in any way we can.”

Clayton is an enthusiastic supporter of this initiative and his enthusiasm is palpable. “Personally, I’ve been dealing with childhood traumas for years. I had to dig deep and really think about how I progressed forward. I do music workshops for kids in care and get them to express their emotions on paper as poetry and then put them over beats, it’s a great way for people to express their feelings. There are things they might not usually tell people but they’re happy to write down. Once you can do that and realise that other people are doing the same thing, that’s when it becomes more comfortable and you start to explore your own self.”