Every so often, as you have read in these very pages, Helen and I, the esteemed editor of this august publication, head out of the lofty heights of Northern Soul Towers and into the real world to sample the culinary delights that Manchester has to offer.

The staff canteen at the Towers is better than most, serving a variety of the finest Northern produce, Wigan pies, Bury black puddings, Eccles cakes and the like, but occasionally we do crave the exotic. So it was with a keen sense of adventure that we set off to taste the new menu at Chaophraya (and for all of you dying to ask- it’s pronounced ‘Chow-pry-a’ and it’s a river south of Bangkok), the well-appointed Thai restaurant on Chapel Walks. 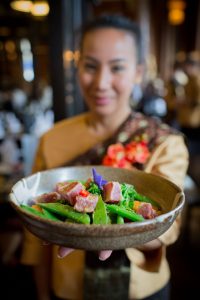 Chaophraya has been on the scene since 2006 with a mission to provide “the first real premium-level authentic Thai restaurant”. It is decorated with a cornucopia of Thai artifacts, knick-knacks and sculptures, providing any diner with a taste of Thailand for the eye as well as the stomach. The staff, most of whom are dressed in traditional costume, greet you with the equally traditional Wai, a slight bow with the palms pressed together as if in prayer. As far away from the flat cap and a hearty “how do” you get at our works canteen as you could get and a very welcome change for all that.

We were politely shown to the bar – a new experience for me as I’ve only ever been impolitely shown my way out of bars – to be offered a ‘Mocking Bird’. This consisted of a good measure of Jinzu gin (see under Gin Fest), Heering Cherry Liqueur, grapefruit and sparkling spring water, which came in a leafy bird’s nest. Well, I know now how to really kill a mocking bird…

At table, we were served a platter of chicken satay, Thai fish cakes, spring rolls, squid and wing bean tempura with chilli and peanut dips. A very tasty prelude to the main show which opened with a sweet and fire green chicken curry and a traditional Pad Thai as well as a couple of Singhas. The star of the show was a chamber-aged sirloin steak, which was sliced raw and self-cooked on a Himalayan rock salt block to your liking. Accompanied by a chilli dip, it was unusual, tender and just the kind of exotic we were looking for. As we ate this wonderful food, the two of us chatted away for ages about office gossip and Helen’s time as a crime reporter in London as I diverted her from her desire to twat the diner at the next table who was explaining very loudly and over-sharingly that she had just been dumped. I can only say that Helen’s restraint was admirable.

Chaophraya is a feast for the eye and palate. A restaurant for a special occasion or, for us Northern Soul souls, a treat after work. And even a place to get over that nasty break-up. 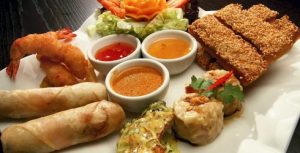