A new genre: thriller-farce? A sinister mystery, plus umpteen doors, rushings around and confusion, mistakes/mistaken identity. And (it says here), ‘ludicrously improbable situations’. How else would such a bunch of oddly assorted characters board a train then have one of them go missing and everybody deny all knowledge of her? Except for Iris, who cannot understand why the lady looking after her would vanish. To add insult to injury (almost literally, the Gestapo being involved), an impostor suddenly appears. But with help from scatty hero, Max, the clues are painstakingly revealed until…

I haven’t actually seen the film but, for some reason, I have a vague recollection of two cricket-mad chaps. Here, there is also an odd couple, Margaret and Eric, embarked on a disastrous affair. They may all be surplus to requirements bu you just go along with it, enjoying comedy from the former, melodrama from the latter. And so I found myself trying to solve the puzzle, and didn’t have much time to scrutinise staging and acting. Nevertheless, the train scenes are book-ended by the station where the passengers are stranded after an ‘avalancha’ and arrival in Victoria. Most of the action takes place on the train, and two compartments and the dining car form a trio of stages. Unfortunately, there’s not a great deal to work with – sound and special effects are utilised mostly to increase the tension. 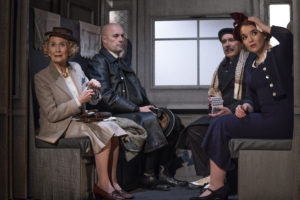 But the cast throw themselves into all this with relish. A rather lengthy opening scene includes a lot of German, which could be baffling, never mind the dancing around with station guards decked out in swastikas. It’s disconcerting to encounter a happy Nazi but he appears to represent the ordinary German citizen before war breaks out. You certainly get the real thing with Joe Reisig, innocently described as ‘The Official’, but a constantly threatening presence, and there’s a similar situation with another of the motley crew, a conjurer, would you believe (Signor Doppo played by Mark Carlisle). We also get a nun in high heels, and Natalie Law does well with cameos including a helpful but conniving stewardess, and Blanche, Iris’s American friend. Elizabeth Payne portrays Frau Kummer, as well as the exasperated Margaret who is involved with Philip Lowe’s blustering, ill-tempered Eric.

So we come to the heroes and villains. Maxwell Caulfield, despite a slippery accent, is menacing as Dr Hartz, if more like Dr Feelgood in his concern for Iris and Max, but not somebody you would want to meet on a dark night, never mind aboard a train. His wife, the renowned Juliet Mills, is nicely convincing as Miss Froy, the eponymous Lady, while ingénue Lorna Fitzgerald provides a spirited heroine, Iris. Her scenes with Matt Barber (Max) make for interesting viewing because the idea is clearly to recreate the classic opposites attract, where initial dislike succumbs to unmistakable chemistry, inevitably drawing them together. Hmm, for a start the banter consists of them being extremely rude to each other. And while this amusing, he is bumptious and clumsy for a leading man/love interest although vital for the plot. However, he endears himself to the audience who were audibly delighted when the fine romance was resolved.

This is an evening of good old-fashioned entertainment, presented by Bill Kenwright, courtesy of The Class Thriller Theatre Company. And judging by the packed audience’s delight, they and us are on to a good thing. 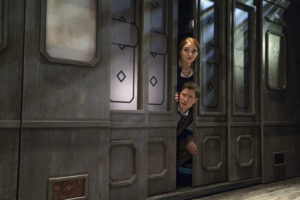 The Lady Vanishes is at the Floral Pavilion until March 2, 2019. For more information, click here.