It takes a particular kind of grace to be captivating while performing the role of a spiteful drunk. Yet this is what Tamara Rojo manages to achieve as Stepmother Hortensia in Christopher Wheeldon’s dark, romantic and unusually human reimagining of Prokofiev’s Cinderella for the English National Ballet.

Gone is the Disney-style witch as head of this troubled household. Instead, we have the scene-stealingly charismatic Rojo, who is also the ENB’s artistic director, as a glamorous but insecure and cold social-climber. In place of pantomime dames as ugly sisters, we meet the slender and elegant Edwina and Clementine. They are fair of face and foot but the former is a spiteful bully, the latter less so but weak and snide; a far more interestingly realistic pair of step-siblings than the cartoonish cliché. Gone also are the fairy godmother, mice and pumpkin. Instead we have the Four Fates, a gold-painted quartet of male dancers reminiscent of Matthew Bourne’s swans, who watch over Cinderella in the wake of her mother’s death and guide her through her tribulations to the Prince. From grave-side grief springs a tree, inhabited by spirits of the seasons, who teach Cinders the steps she will need to dance her way to a better life at the ball. Clever use of video projection gives dynamism to the set, designed alongside a panoply of frankly sumptuous costumes by Julian Crouch, and when act one closes, with the young heroine transformed, it is a surprise to note that an hour has passed as opposed to five minutes. 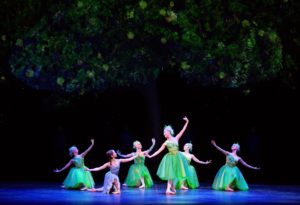 As to Cinderella herself, Erina Takahashi’s nimbly-danced interpretation is vulnerable yet worldly. Wheeldon is quoted in the programme notes describing the character as feisty and defiant, but more striking on stage is a sense of wounded optimism – a kind of wide-eyed yet cautious hope for better things from someone who has suffered tragedy young. Essentially, I wanted to give Takahashi’s delicate frame a hug. No need. That hug came metaphorically in the form of Joseph Caley’s Prince Guillaume, who somehow combined bounding athleticism with a puppy dog expression of adoration and protectiveness that perfectly conveyed a sense of young love unfolding. When the pair danced together, Takahashi moved in a way that appeared completely responsive to his touch while in fact being in total control of her own motion. Alongside this old-fashioned romance there is wit and originality, particularly the comedic shoe-trying scene at the start of act Tthree, and a hint of the Brothers Grimm darkness, with fantastical woodland creatures and a violent effort to make the golden slipper fit. There is also, this being the ballet, the requisite amount of sparkle and grandeur. It is, in all, a fairytale infused with just the right amount of humanity’s problems and positives to create a modern display of dancing prowess that is at once escapist and poignant. Magical. 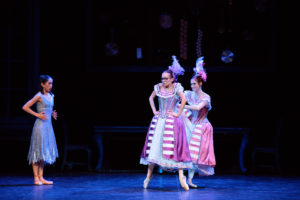 Christopher Wheeldon’s Cinderella is at the Palace Theatre, Manchester until October 19, 2019 and on tour. For more information, click here.

As part of ENB’s 70th anniversary the company is celebrating and thanking its touring communities by giving away 70 tickets during each run of performances in every city they tour to. During their performances in Manchester the ballet company has gifted tickets to staff from local charities and organisations including Talbot House, Mustard Tree, Frost Foundation, Lifeshare and Teenage Cancer Trust/Christie Hospital. English National Ballet will also give a ‘Golden Ticket’ for a special English National Ballet experience or piece of merchandise to one audience member per performance in Manchester.