When after 15 minutes a six-year-old Snow White in the adjacent seat politely enquires as to whether she can have a sandwich, you know that the current iteration of Disney on Ice is not quite as captivating as it might be. To be perfectly honest, I was distracted by the prospect of snacks too. 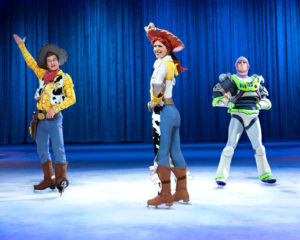 This year’s show involves considerably fewer monster tunes and considerably more chat than other recent versions of this long-running commercial juggernaut. Or at least it feels like it does. And since dialogue means skaters lip-synching to what sounds like someone playing the relevant Disney DVD through tinny speakers, it is easy to see why one’s thoughts might turn to sustenance. I refuse to believe that anyone was inside Manchester Arena because they wanted to see a woman dressed as a fish (Dory) wax lyrical about the need to find her parents while ambling around on skates. Nor were they there, one assumes, to see several unchoreographed meetings between performers’ bottoms and the ice – something that I’ve not seen before in several years of Disney on Ice attendance.

What they had come for was the genuinely impressive athleticism of the pair who performed as The Lion King’s Simba and Nala in Can You Feel the Love Tonight, a curiously low-key final number before the curtain call. The audience was also there, no doubt, for the extended Frozen section. After providing a reliably stonking finale for at least the last two tours, Anna and Elsa were this time relegated to the first half. Yet Frozen remains – for obvious reasons – the Disney film that works best on the ice and this was the segment which, with its flurries and fireworks, held the attention most reliably. 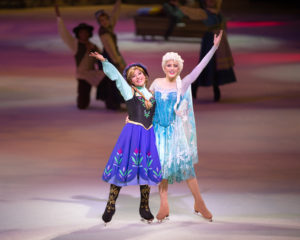 Too much of the rest of this production, billed as a celebration of a century of Disney, was either insufficiently well known by the young audience (Mulan), too rushed – particularly a quick-fire megamix of classic princesses that felt like it was there to facilitate the appearance of Cinderella, Jasmine et al on the advertising – or just too waffly. Even the Toy Story 4 section, which was at least timely and attracted a cheer upon the arrival of comedy character Forky, was low on show tunes (as the Toy Story films are; that isn’t the point of them) and heavy on chat-and-glide.

Young children who have put on their best polyester dressing-up gear and persuaded their parents to part with frankly extortionate sums of money for merch and slushies are not going to complain too much about the fact that 100 Years of Magic is considerably less than spell-binding. But I will.

Disney on Ice: 100 Years of Magic is on tour nationwide.

“The need for us is still there.” At 28, Junior Akinola is the first person under 30 to chair a board of a major performing arts venue in the UK. But that didn't stop Manchester's Contact Theatre from hiring him. northernsoul.me.uk/the-need-f… pic.twitter.com/XeBMby2zKg